FGCU muggles take on the game of Quidditch 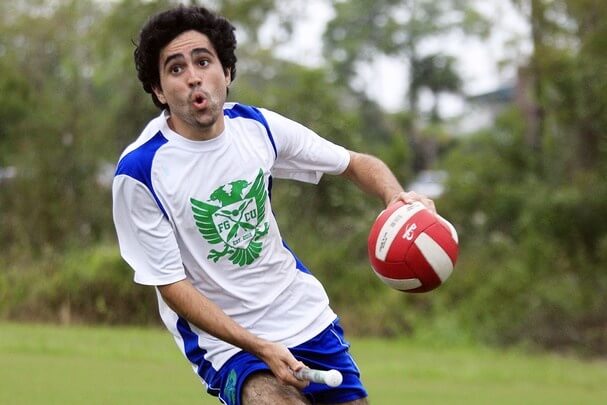 When you think of Quidditch, you probably think about Harry Potter, “the boy who lived,” flying around on his broom, dodging Dementors.  In reality, the sport is not as intense.

The FGCU Quidditch team was established back in 2012. Caroline Waterman, a four-year member and  president of the team, describes quidditch as “nerdy rugby.”  Unexpectedly, Quidditch is a full-contact, co-ed sport.

Quidditch starts with six players from two opposing teams on the field, and yes, they’re all on broomsticks. The object of the game is to get a volleyball, called a quaffle, through any of the three hoops that are on both ends of the field. Each time the quaffle goes through one of the hoops, the offensive team is awarded 10 points.

After 18 minutes of play, the snitch comes onto the field. Unlike in the wizarding world of Harry Potter, the golden snitch is a person, not a tiny, flying ball. The snitch has a  ball attached to his or her waistband, and if a team tackles the snitch, it is awarded 30 points. If the game is tied after the snitch is captured, then the game goes into overtime where the match is decided.

“This year has been different,” Waterman said. “People never really took it seriously until this year. People have always asked to join because they thought it would be funny, but they learn quickly that it’s not a joke.”

If you’re looking for a different,  unique experience, Quidditch may be the sport for you. FGCU competes with all the major universities across the state.

You can support the team as it competes for the Eagle Cup Oct. 24 – wand and cloak are not required.