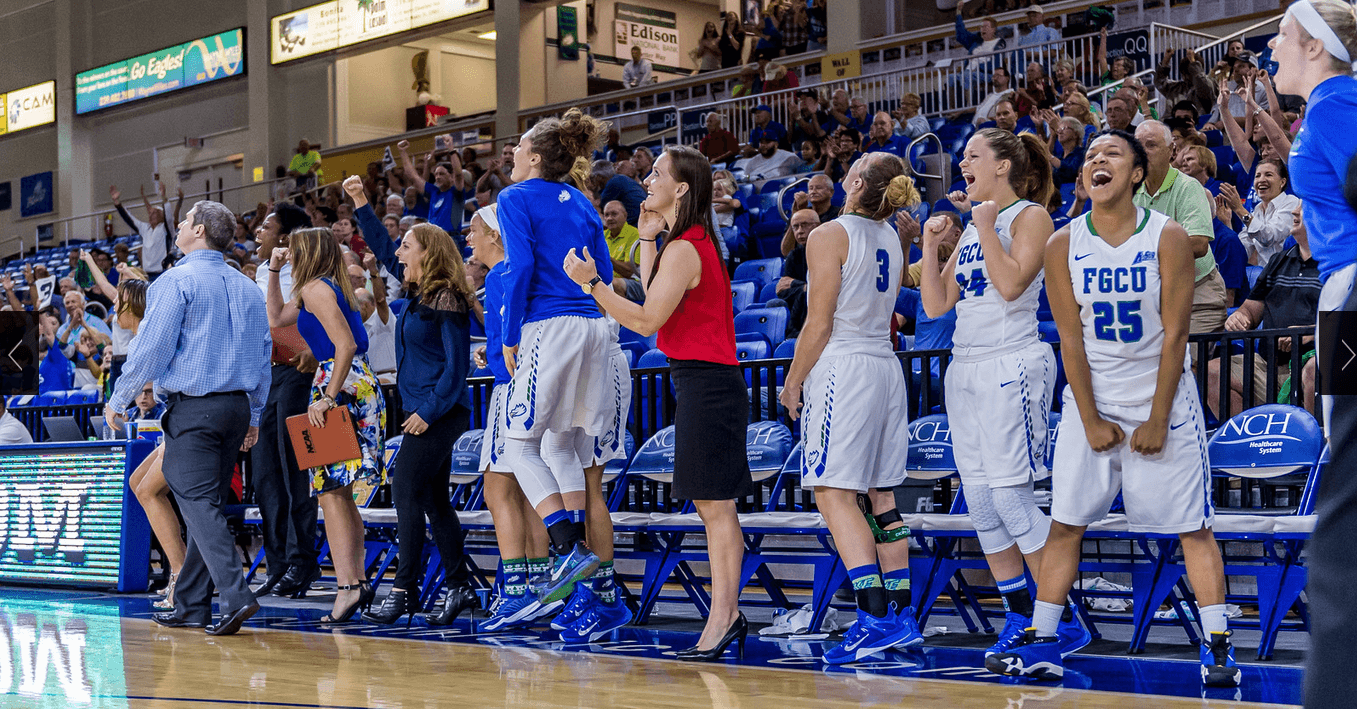 The bench celebrates a play during a 2015 home game. (Photo by Linwood Ferguson)

After a challenging and successful nonconference season, the FGCU women’s basketball team enters conference play with players returning from injuries and a stronger bench following a rocky start to the season.
FGCU entered the season with two players suffering from injuries. The Eagles lost three of their first six games, including two at Alico Arena, breaking a 26-game undefeated home streak.
Although injuries have put a curve in the team’s start to the season – Whitney Knight out with a foot injury and Kady Schrann out with pain in her Achilles – FGCU head coach Karl Smesko says the opportunity for other players to play more minutes has given the team more depth than before.
“Those things have allowed players like Haley Laughter to play more than we would have anticipated, and she’s made the most of those minutes and opportunities,” said Smesko. “So, now, when we do get everybody back at full strength and can practice for a few weeks, I think we have the potential to be an even better team in the long run.”
A redshirt sophomore, Laughter has taken the opportunity to rise to the occasion. Laughter, who is averaging 22.8 minutes compared to last season’s four, has started in 11 of this season’s 16 games. The 5-foot 11-inch North Carolina native a career performance against St. Thomas where Laughter’s seven 3-pointers in a single game led the Eagles to its largest win since 2012.
Laughter’s performance against St. Thomas earned her a career-high 25 points and her team-high seven 3-pointers finishes one shy of the program record held by Kelsey Jacobson, who made eight twice in 2012. Betsey Adams (2012-13) is the only other D-I player for FGCU to hit seven in a single game.Laughter’s 172 points this season have contributed to 17 percent of FGCU’s total points in the nonconference season, averaging 10.8 a game with at least two points in every game.
“Haley’s worked hard on her shot,” Smesko said. “She’s spent the past couple years really working on her form, and I can tell she feels really good about it.”Laughter and Taylor Gradinjan are tied as conference leaders in 3-point percentage, both with a 40.7 success rate.
Along with Laughter, Georgia transfer Sydnei McCaskill, who was cleared to play following the end of the fall semester, after sitting out a year due to NCAA transfer rules, has also given FGCU a deeper bench.
“We’re excited to see Syd actually get to play in games,” Smesko said.
The Top-100 recruit earned a career-high 16 points in her debut against St. Thomas, McCaskill, who is being primed to fill the point guard position following senior DyTiesha Dunson’s graduation, has had a strong presence on the court. McCaskill has earned 20 points and eight assists in her seven appearances this season.
The bench’s 227 points have contributed to 22 percent of the team’s total this season, with 10 players contributing at least 20 points this season.

Players making their way back out onto the court

Knight, the reigning Atlantic Sun Player of the Year, has been slowly making her return to the court since the fractured foot injury that kept her sidelined until her debut against Providence on Dec. 12. In her debut, the 6-foot-3-inch redshirt senior recorded her 12th double-double with 16 points and 10 rebounds in her 19 minutes on the court.
After sitting out for the last time this season in the following game against St. Thomas, Knight has been working her way back out onto the court. In her seven game appearances, including starts in the Eagles’ high-profile games against. Quinnipiac and Auburn as well as against Hartford, Knight has averaged 9.7 points per game.
Schrann, a Vanderbilt transfer, returned from a sore Achilles injury in Saturday night’s nonconference finale against Hartford, after sitting out the majority of her first season of eligibility. Although Schrann was not able to convert any points in her four minutes on the court in the Eagles’ 64-44 win, she was able to begin testing her pain-tolerance in a game setting.
“It was a bit stiff, but it was great to get back out there anyway,” Schrann said. “It helps to have the limited time, just to see how far I can go each day. It’s more of a pain thing, mostly because it was stiff. When I warmed up a little, it was fine.”
Schrann played eight minutes in the Eagles’ season opener against North Carolina A&T, where she was successful on her only shot from the arch before the pain kept her on the bench. FGCU athletic trainers allowed Schrann five minutes into Hartford’s game. The injury has been repaired, now it’s just an issue with pain.
“Hopefully this will be the start and she’ll be able to practice longer and get her into games earlier,” Smesko said. “We’re starting slow, making sure we don’t have any setbacks and hopefully it’ll progress in the right direction. She’ll give us a big boost for part of conference play.”
Scouting Stetson

The Eagles will host rival Stetson on Saturday, Jan. 9 in a double-header Atlantic Sun Conference season opener with the men’s team. FGCU opens the conference season with an RPI of 58, earning wins against Auburn, Arizona, George Washington and Quinnipiac, as well as a close five-point loss to No. 9 Mississippi State.
FGCU holds a 16-3 all time record against the Hatters, including an undefeated conference record last season.
The Eagles enter conference play 12-4, while the Hatters bring a 9-5 record with wins over Central Florida, Georgia State and Georgia Southern, earning them a 179 RPI.

The FGCU women will face Stetson at 4 p.m. at Alico Arena prior to the men’s tilt with the Hatters at 7 p.m.

Sierra Harley, a junior college transfer from Ohio who joined FGCU this summer, left the team at the end of the fall semester after playing 11 total minutes and scoring two points in four games.

“She’s no longer on the team,” Smesko said. “I think she wanted more of an opportunity and to be closer to home.”