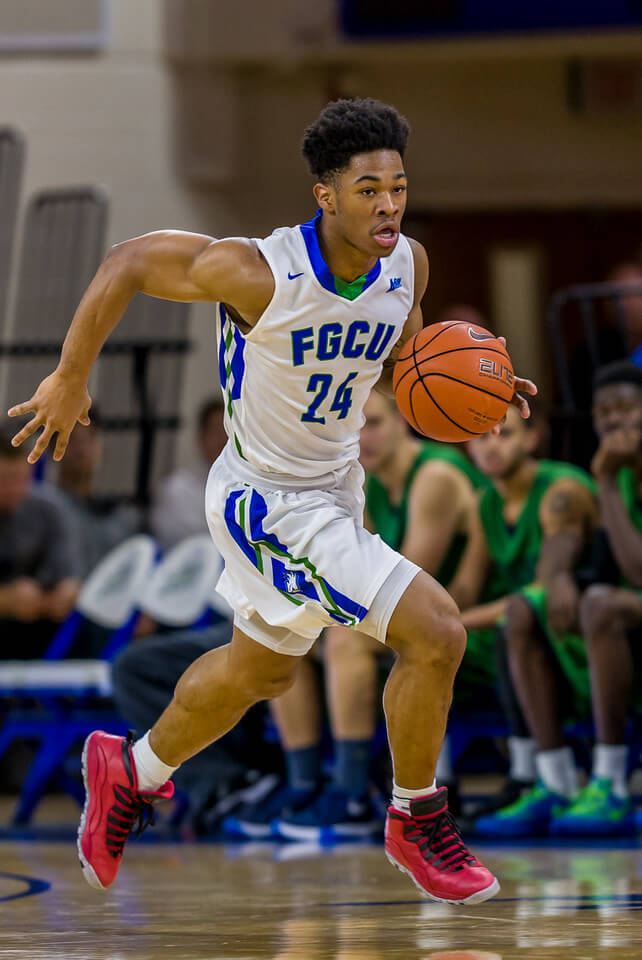 On Tuesday night, the FGCU men’s basketball team took on Webber International in its final non-conference game of the season. Setting a Division-1 record for most points in a regulation contest in program history, the Eagles defeated the Warriors 104-59.

It was a great all-around game for the Eagles, as they finished the night with seven players in double figures. Among the seven players leading the way for the Eagles was forward Marc-Eddy Norelia with 20 points all in the first half and 9 rebounds.

FGCU’s best recruit in program history, Rayjon Tucker, had a great all-around game, scoring 11 points, grabbing 8 rebounds, setting up his teammates with 4 assist and topped off his performance with an emphatic jam that brought the Nest down.

Christian Terell finished off the night with 13 points, shooting 3-4 from behind the arc, and tallied 3 rebounds and 3 assist.

Filip Cvjeticanin ended with 11 points, with 9 of the 11 coming from behind the arc, and dished out 5 assists.

Forward Antravious Simmons finished off with 12 points and 9 rebounds.

Kevin Mickle provided a spark off the bench, scoring 14 points, grabbing 4 rebounds and dishing out 2 assists.

Coming into the second half, the Eagles did not take their foot off the gas, as they shot an even better 61.3 percent from the field and 66.7 from behind the arc. The Eagles defense came out just as strong in the first half, lowering the Warriors shooting percentage from behind the arc to 9.1 percent. The bench played a huge part for the Eagles in second half, tallying 30 of its 41 combined points. The green and blue would lead by a whopping 50 points during the game. The final score was 104-59.

“I thought we had some good spurts,” head coach Joe Dooley said. “The ball moved a little bit better, which we discussed, and it was nice to get Kevin and Ray and some of the younger guys some minutes today. Christian got us off to a good start, and Kevin got us off to a good start in the second half, and hopefully that will give us some momentum going into conference play.”

Sitting out for the Eagles were gold medalist Julian Debose, who was out with an ankle injury, and Demetris Morant, with pain in his shin, but they should be ready to go in their first Atlantic Sun game of the season against the Stetson Hatters.

“We had to shut them down for a couple of days, but hopefully they’ll be ready to go by the end of the week.” said Dooley regarding Debose and Morant.

The Eagles now turn their attention to A-Sun conference play where they begin their quest for a regular-season title against the Stetson Hatters at home on Saturday Jan 9.

“I think we are very confident going into conference play,” Terrell said. “I think if we practice the way we have the past couple of days, we will go on an upswing and play well.”