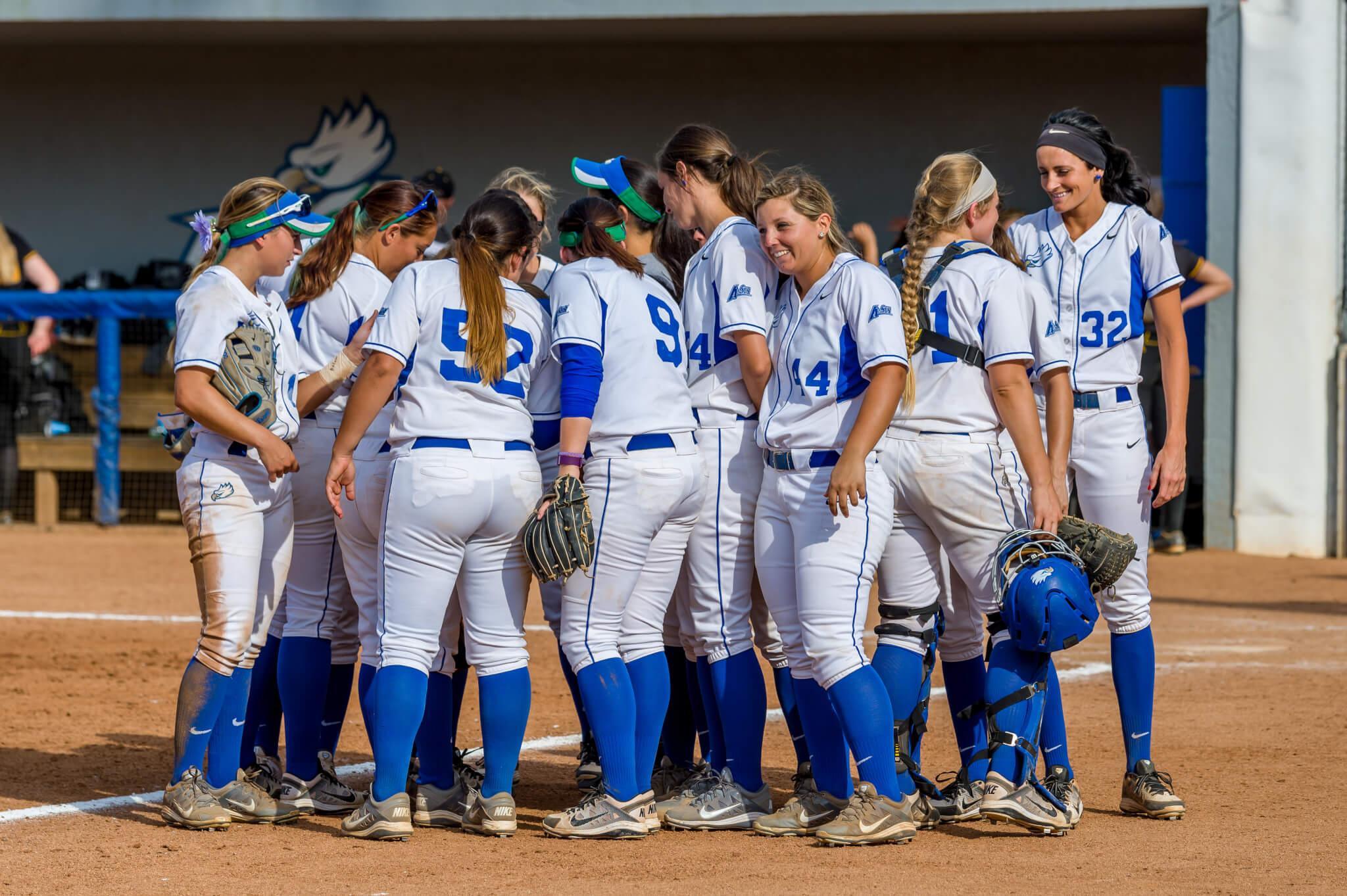 In a three-game battle against UNF and the weather, the FGCU softball team rode dominant pitching in the circle to clinch a spot in the Atlantic Sun Softball Championship and power through to the top of the standings in the A-Sun Conference.

Freshman left-hander Riley Randolph continued her dominance in the circle, fanning nine batters in a complete shutout to earn her 14th win of the season in the Eagles’ 6-0 game one victory as well as closing out the remaining two games of the series with two saves.

In the first of two games under the Friday night lights, despite some rain during warm-ups, the Eagles jumped out to an early 1-0 lead thanks FGCU’s first-ever inside-the-park homerun hit by Kelsey Huff.

In the bottom of the second, FGCU padded on two more runs after Logan Green walked Michaela Hynes with the bases loaded to score Chandler Middlebrook, making it 2-0. The Eagles’ second run of the inning came from a sacrifice fly to left field by Huff, scoring Bri Innamorato from third and giving FGCU a 3-0 lead going into the top of the third.

The Ospreys’ woes in the circle continued after Louie Ross sparked another offensive explosion for the Eagles, reaching first base on a bunt single. Raquel Fournet followed up Ross with a single of her own to give FGCU two runners on base.

Middlebrook loaded the bases after a single to left field, giving Innamorato a chance to increase FGCU’s lead. Innamorato lined into a double play but was able to score Ross from second to put the Eagles up 4-0.

After Green walked Bree Tourtillott, FGCU added a fifth run. Jeanie Veredese reached on an error by the Osprey’s left-fielder, scoring Middlebrook from third, but UNF escaped the inning after tagging Tourtillott out at home.

Huff came in to score for the second time in the contest after Ross hit an RBI single up the middle to propel the Eagles to a 6-0 victory over UNF.

The Ospreys came out to play in the second game of the night, sparking three runs in the top of the first to grab an early 3-0 lead.

UNF’s newly light flame was put out relatively quickly after the Eagles’ red-hot offense continued behind the plate.

Huff led off the bottom of the first with a double to right center before coming into score after Makensie McAvoy blasted a ball down the right field line over the wall to bring the Eagles right back into the ball game.

Fournet reached first with a single to centerfield, quickly moving to second after Middlebrook reached first on a walk. Innamorato stepped up to the plate with two runners on base, but the rain began to fall at the FGCU Softball Complex, forcing a 97-minute rain delay.

The game resumed at 8:30 p.m., but Innamorato and Verderese both flied out to end a prolonged bottom of the first.

FGCU completed its comeback effort in the bottom of the second behind an RBI single by Huff and RBI walk by Middlebrook to take a 4-3 lead heading into the top of the third.

After a scoreless third inning, the Ospreys found the game tying run in the top of the fourth behind an RBI single to right field by Navia Penrod, scoring Ashia Kerr from third base.

The teams embarked in a defensive battle throughout the remainder of the game with an offensive stalemate on both sides of the plate.

Randolph closed out the game with a seven-out save, striking out two of the last three batters and bringing FGCU one game closer to a sweep.

Both teams took the diamond at 1 p.m. Tuesday for the series finale at the FGCU Softball Complex where the Eagles hoped to bust out the brooms.

Despite runs being scored in the first inning of the previous two contests between the teams, UNF found the breakthrough in the top of the third.

Ashley Niesman sparked the inning for the Ospreys with a triple to left center. Penrod then reached first after being hit by a pitch and quickly advancing to second after Alex Arciola grounded out to third. Niesman reached home to give UNF a 1-0 lead after Shelby Duncan grounded out to second.

The Eagles responded the same way they had every time they went down this series, putting numbers on the board the following inning.

Natalia Lopez was hit by a pitch to begin the bottom of the third, followed by a single to right field by Amber Plaza. Huff singled to left to give McAvoy a chance to bring FGCU level or take a lead. McAvoy reached first on a fielder’s choice, keeping the bases loaded, as the Ospreys opted for a force out at home.

Ross stepped up to the plate and tied the game up at one a piece with a single to left field, scoring Emily Demurias. Fournet tacked on two more runs for the Eagles, doubling to center to score McAvoy and Huff to give the Eagles a 3-1 lead.

Down 3-1, UNF didn’t back down, bringing the game to within one run.

Taylor Wade took over in the circle for Gabee Draney, who allowed just one run and three hits, to begin the top of the fifth. Kerr began the inning with a single to center field. Kerr advanced to second after a sacrifice bunt but was thrown out by Plaza trying to steal third.

In the next at-bat, Wade walked Penrod, followed up by a single to right field by Arciola to advance Penrod to second. Left-hander Randolph came in for the Eagles looking to end the inning but was unable to end the inning with Duncan’s RBI single, scoring Penrod from third to bring the score to 3-2. McClelland fouled out to end the top of the fifth.

Randolph made up for the one earned run, retiring the next six Osprey batters to complete the sweep for the Eagles and propel them to first place in the conference.