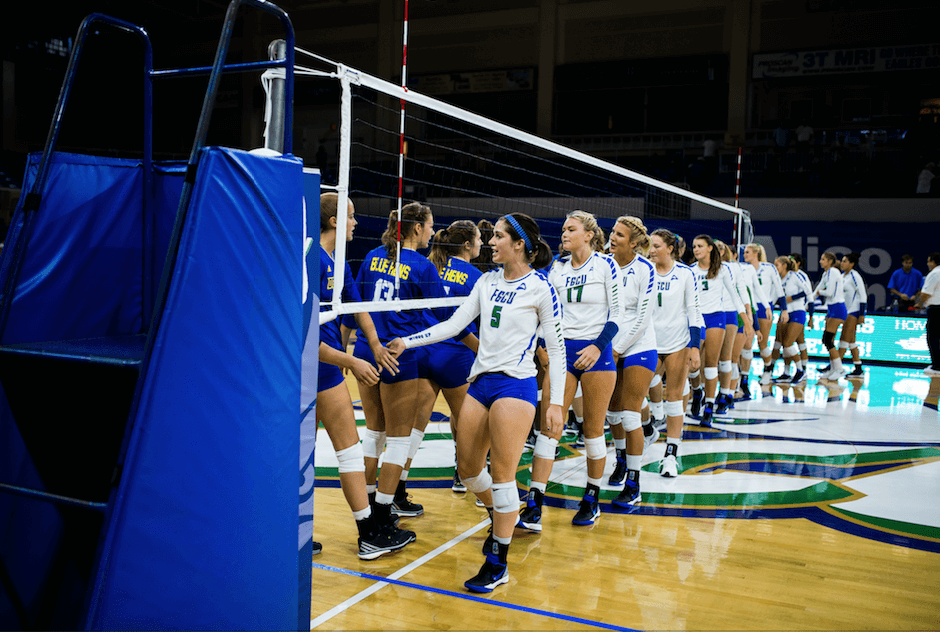 In the first round of ASUN tournament play, the FGCU volleyball team traveled to Nashville, Tennessee, to play #6, Jacksonville. The Eagles came out with a 3-1 victory over the Dolphins after four long sets. This will be the sixth time the Eagles advanced to the ASUN Championships semifinals.

The Eagles got off to a slow start, but responded after the 10-minute intermission with a pair of 25-16 wins in the third and fourth sets to claim the victory.

Highlighting the game was first team all-conference player, Amanda Carroll, who totaled 13 digs and a game-high 27 kills, which tied for the third most kills in a game in program history.

Along with Carroll, Leigh Pudwill also tallied an impressive 13 kills and 11 digs. Additionally, all-freshman team performer, Giovanna Borgiotti, added 11 kills, along with Maggie Rick who assisted on 45 of FGCU’s 62 kills.

Despite the slow start, the Eagles were able to claim the first set, 25-23. With neither team leading by more than two points in the set, Carroll and Serrano stepped up on the net and added tremendous help offensively.

With the score tied 23-23 in the first, Borgiotti came through with back-to-back kills to put the set away.

In the second set, Jacksonville led from start to finish and tied the score, 1-1. The Dolphins jumped out to a quick 10-5 lead, forcing Botsford to take his first timeout in a five-point deficit.

After trailing 16-8 midway through the set, the Eagles won seven of the next nine points, cutting the lead to 18-15. However, FGCU couldn’t stop JU’s momentum, ending the set in their favor, 25-21.

Coming out of the 10-minute break, the Eagles stepped up their game, easily bringing in a pair of 25-26 wins in the final two sets of the game.

FGCU improved its hitting percentage in each set to .289 and .371 in the third and fourth sets to ultimately outplay the Dolphins .253 to .203. Carroll again led the way with seven kills in each of the last two sets.

Pudwill also stepped up, putting down nine of her 13 kills in the last two sets. Additionally, Borgiotti and Serrano helped put the game away with a combined 10 kills.

Defensively, FGCU held Jacksonville’s hitting percentages to .167 and .125 in the third and fourth sets. Rhoades and Stephens led the defensive effort with a combined 42 digs in the game, including a game-high 24 from Rhoades.