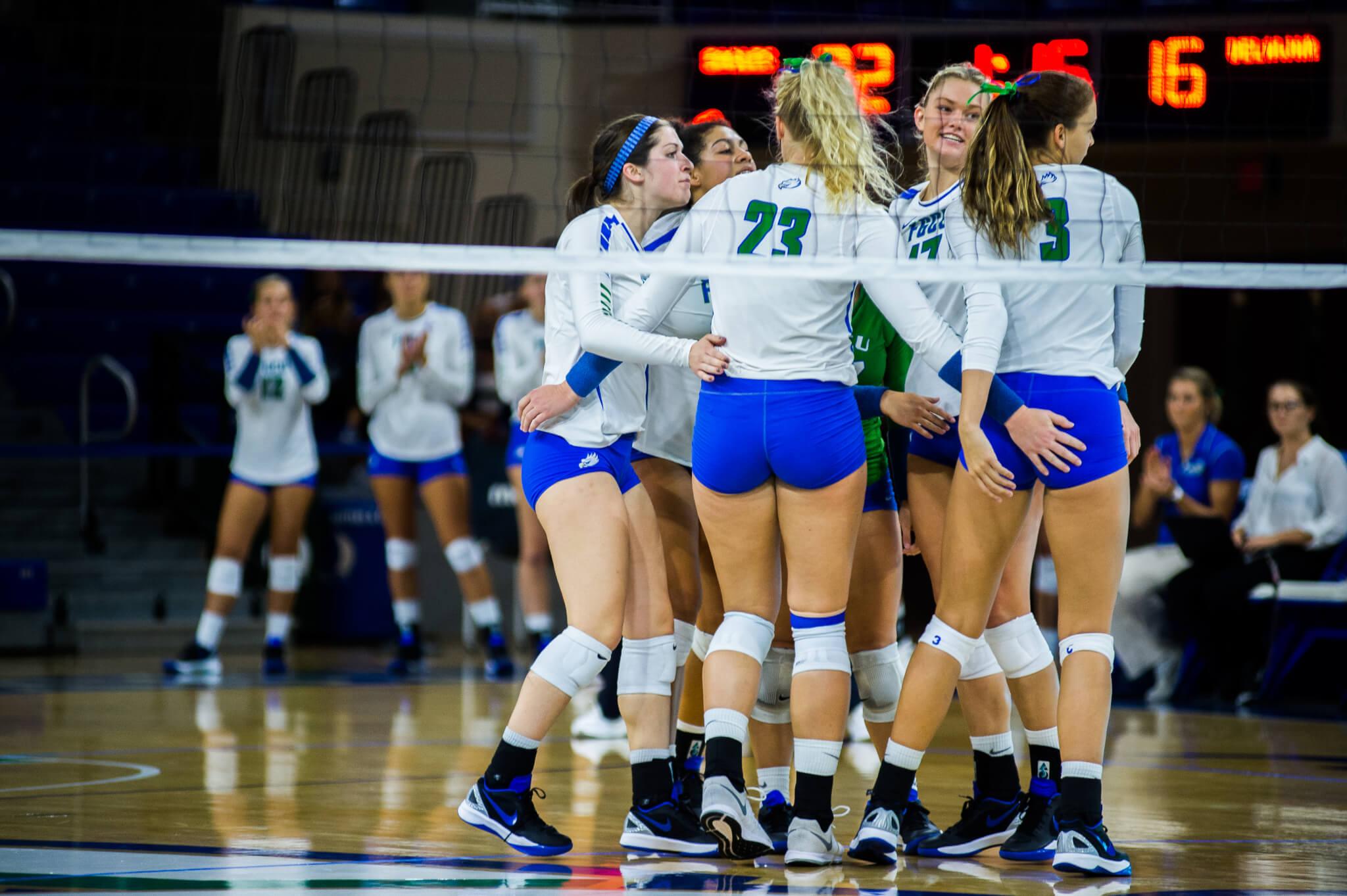 FGCU remained victorious in their third tournament, the FGCU Homewood Suites Classic; adding match wins against Marist and Indiana to increase their winning streak to six on Saturday.

FGCU swept through the match against Marist by winning the first three sets on Saturday morning. Against Marist, FGCU kept its errors down to nine while Marist racked up 15 errors. FGCU again showed up with both offenses and defense running smoothly to attain 43 kills with Amanda Carroll leading with 15 kills compared to Marist’s 30 kills during the match. The Eagles dominated in each set with large score gaps [25-11, 25-20, 25-16].

After winning earlier Saturday morning against Marist (0-9), FGCU took on the infamous big-ten Hoosiers, who were undefeated at the time. The riveting game went all the way to the fifth set when the Eagles came out on top, making history for FGCU by making this the first-ever win over a Power Five Opponent [25-17, 28-26,17-25, 22-25, 15-12].

“We had to really scratch and claw for this one,” head coach Matt Botsford said. “I think any time you get on a winning streak there’s an element of resilience and sometimes good fortune.”

To start off the match, FGCU claimed the first two sets, giving the Eagles the lead advantage by staying relentless on offense, having defense pick up everything thrown at them, and capitalizing off Indiana’s errors. In the first set, FGCU had kills from Carroll, Daniele Serrano, and Marlene Moeller to have a hold onto the lead of 22-14. An error from the Hoosiers sealed the first game to FGCU at 25-17.

The second set was back and forth with FGCU leading right away. Indiana tried to catch up to FGCU the whole game, tying it throughout, but after a three-point consecutive lead towards the end of the set for Indiana, 24-21, FGCU’s Leigh Pudwill and Kaitlan Krivdo added two more kills for the Eagles, bringing them back into the game. Finally, kills from Ciara DeBell and Karissa Rhoades allowed FGCU to claim set two and be up 2-0.

Big Ten powerhouse, Indiana, switched momentum into the third set and won to put pressure on the Eagles. Indiana gained a lead of 9-1 to start the set and the Eagles never scored enough consecutive points to catch up. Carroll’s kill put the Eagles at 17 points, but the Hoosiers took the set at 25-17 with a kill from their side.

The Eagles were only up one set now, 2-1. The fourth set began with an Eagles’ lead, but Indiana met their momentum by gaining the lead of 13-6. This set turned things upside down for the Eagles, as DeBell went down with an injury, but the Eagles battled back with the help of the supportive crowd of 900. However, after being tied 21-all, the Hoosiers added four more points to their score. This set win for Indiana tied the Eagles and Hoosiers, 2-2. The fifth set would seal one team’s fate.

After injury in the fourth set and two consecutive set losses, FGCU had a lot going against them, but they continued to play relentlessly in the fifth set to fifteen. Hoosiers had the lead at 10-7, which forced FGCU to pull it together to make something happen. The Eagles answered by scoring four consecutive points to demolish the score gap. An error from the Hoosiers sealed the deal for the Eagles by defeating the Power House for the first time. It was a nail-biting match that ended with a FGCU victory, 3-2, and an overall season of 7-2.