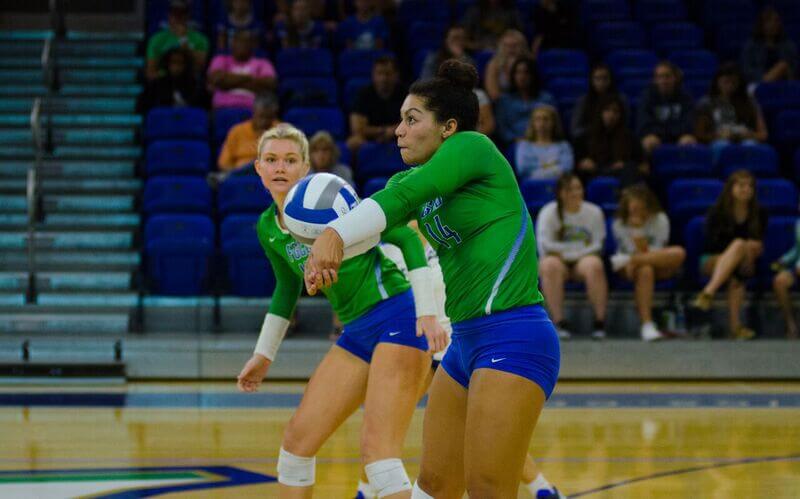 Although the Eagles fell to the Ospreys, FGCU was still able to claim a spot in the ASUN -Championship for their sixth straight year in post-season, because Stetson and NJIT also lost in their previous games.

On Friday evening, FGCU experienced more errors than usual and a lower hitting percentage, with 33 errors and a .060 percent compared to UNF’s 20 errors and .188 percent. UNF showed strong blocking with 15 block kills compared to the Eagles’ five block kills.

In the first match, the teams continued to go point-for-point, and were tied 10 times throughout the set. The Eagles took a four-point lead mid set at 13-9, and forced UNF to take a timeout,. The Ospreys took the lead toward the very end and captured the first set, 25-21.

An immediate Eagle lead opened up the second set with 4-0 on the board. The Eagles achieved an eight-point lead and forced Osprey to take a timeout.

FGCU remained dominate in the second set and pushed to create a large score gap. Leigh Pudwill executed a kill, and the Eagles claimed the second set, 25-13.

In the third, the Eagles continued to limit their errors. FGCU immediately took the lead and held onto it throughout the set.

A kill from Maggie Rick gave the Eagles a six-point lead at 14-8, and the Eagles continued to execute on defense and work to get around UNF’s strong block. The Eagles pulled away and claimed the third set, 25-13, and now had the advantage of 2-1 in the match.

In the start of the fourth set, both teams were back-and-forth again.

FGCU took a timeout at 8-10 to muster up a comeback and claim the set and match, but UNF remained strong on defense with a big block. Errors were more prevalent for the Eagles this match, and that allowed for UNF to get a run of seven to end the fourth set in favor of UNF, 25-13.

“UNF blocked very well and had us out of system throughout the night,” head coach Matt Botsford said. “Our offense was uncharacteristically high-error and inefficient through most of the match.”

After executing several kills and capitalizing off of FGCU’s errors, UNF had taken a nine-point lead in the fifth and final set. FGCU fought hard to come back and take the fifth set, but fell short, and UNF claimed the fifth set, 15-8.