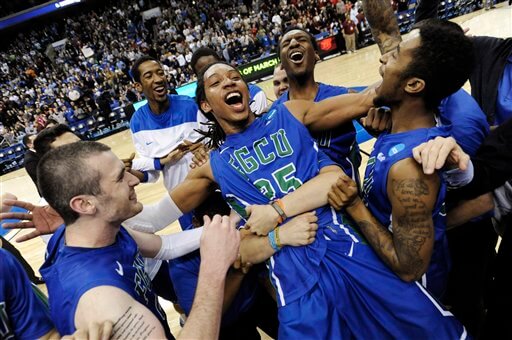 FGCU's Sherwood Brown celebrates with teammates after their 81-71 win over San Diego State in a third-round game in the NCAA college basketball tournament, Sunday, March 24, 2013, in Philadelphia. Florida Gulf Coast became the first No. 15 seed to make the Sweet 16. (AP Photo/Michael Perez)

During the Georgetown game in the second round of the NCAA tournament the moniker went viral. At 8:44 p.m. on March 22, the official FGCU Twitter account tweeted this: “When people ask you where FGCU is, just tell them Dunk City, Florida!”

And the madness began.

T-shirts, Twitter accounts, school ID’s and posters were just the beginning. National outlets started to referring to FGCU not as the Cinderella Story but as Dunk City.

When USC hired Andy Enfield on Monday its official Twitter account sent out this: OFFICIAL: Please welcome Andy Enfield (@CoachEnfield) to the #TrojanFamily as the new head coach of @USC_Hoops. #DunkCityUSC”

“There is only one Dunk City, USA,” Kavanagh said. “It’s inappropriate for USC to (use the term), and I will let USC know that.”

Before the Sweet 16 game against Florida Darren Rovell of ESPN reported that Charlie Pennachio of Fort Myers filed papers with the U.S. Trademark and Patent Office on Monday, just a day after FGCU men’s basketball team defeated San Diego State 81-71 to advance to the Sweet 16.

When that story was reported the school itself has not made a trademarking claim. Tuesday during the press conference, FGCU President Wilson Bradshaw stated the school in the process of getting Dunk City trademarked.

“We’re being very aggressive about it,” Bradshaw said. “Make no mistake; the nation knows where Dunk City is.”

According o the United States Patent and Trademark Office a trademark can take anywhere from six to seven months from filling out an application.

“USC claiming Dunk City, but Enfield didn’t make a play,” sophomore guard Brett Comer said. “He gave us the blueprint for it, but we made every single play. We had the athletes to do it. I made the passes to guys to do it. We are still Dunk City. Nobody can ever take that away from us.”