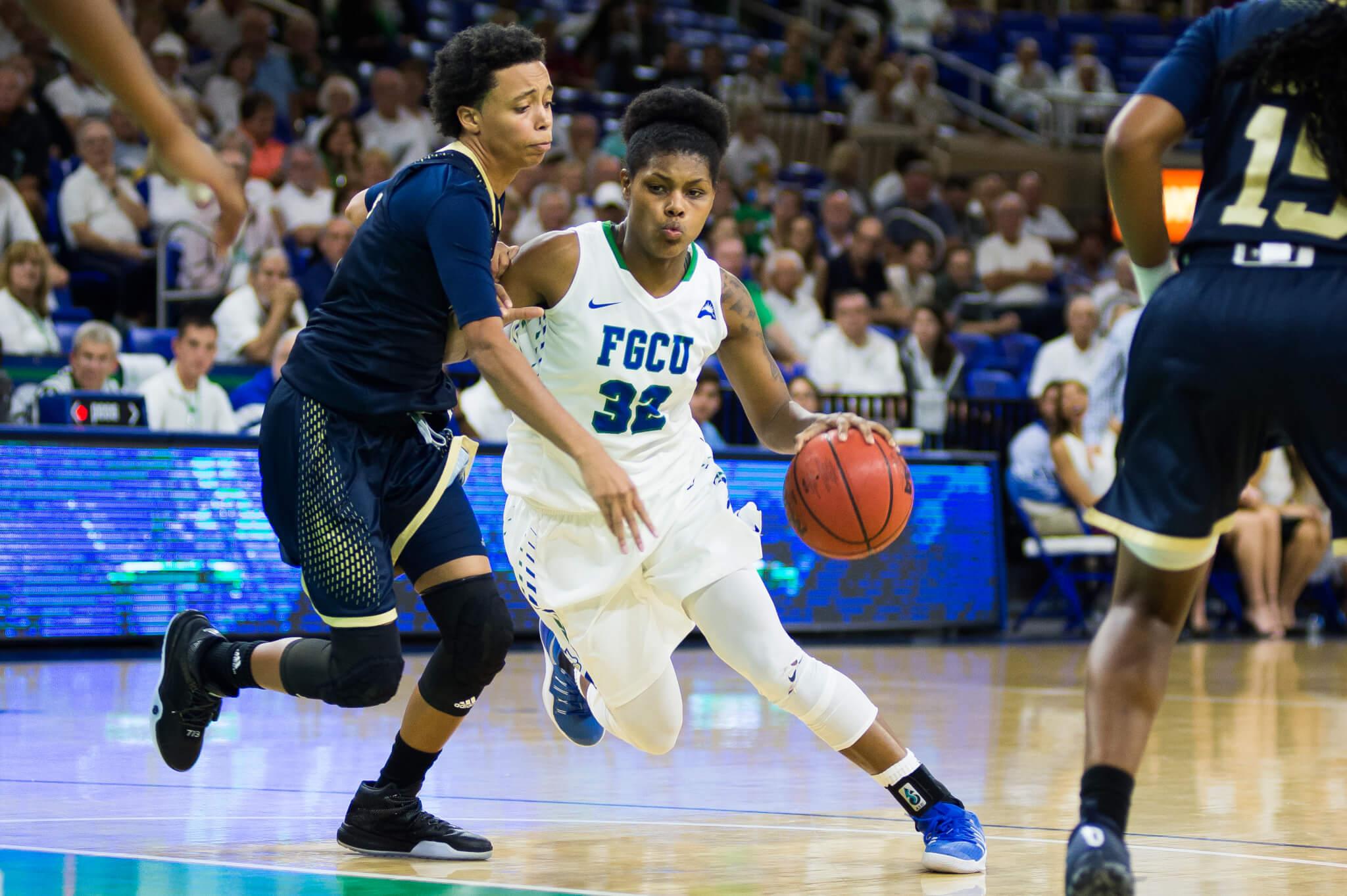 Filmed and edited by Shylah Soares.

Returning home after going 1-1 in its first road trip off the season, the FGCU women’s basketball team defeated FIU 89-42 in their first home game of the season.

Playing in their first game in front of the home fans at Alico Arena, Dow grabbed seven boards and notched three steals to go along with her 14 points; Rosemarie Julien tallied three assists to go along with her 10 points, and Tytiona Adderly grabbed 12 rebounds, with four of the 12 coming off the offensive glass.

“I felt like the kids that put on the uniform for the first time for us had a lot of energy,” FGCU head coach Karl Smesko said. “The only time where I thought we went over board was when I saw Rose on the sideline and they were about to inbound the ball, and she was turned around cheering on the fans when we should be inbounding the ball.”

Nelson’s 21-point performance marked the third straight game she was able to finish the game in double figures after notching 11 points in the Eagles’ loss to Quinnipiac and 15 points in their win over Hartford.

“I, of course, have to adapt to the new system,” Nelson said. “I still need to screen and all that other stuff, but I’m just looking for places to drive and incorporate my game to help the team.”

The Eagles outperformed the Panthers in every column on the stat sheet with probably their most impressive stat of the night being their 45 points off the bench with Dow and Laughter combining for 31 of the 45.

Opening the quarter with somewhat of a slow start, Nelson got the offensive going early, scoring four points on back-to-back shots, while the Eagles knocked down three shots from behind the arc to have a 18-7 lead at the end of the first quarter.

After holding the Panthers without a bucket for the final eight minutes of the first, the Eagles dominated the offensive boards, reaching eight offensive rebounds in the second quarter. FGCU found its rhythm on offense, building a 23-point lead behind nine points from Taylor Gradinjan at the half.

Building on their 42-19 lead they held at the half, the Eagles continued the theme of aggressive play on both ends of the floor, holding the Panthers to zero percent from behind the arc while shooting 55 percent from the field.

While providing a big spark off the bench, Dow caught an elbow to the face with four minutes remaining in the quarter that would require two stitches on her lip.

Coming into the final quarter with a 69-34 lead, Laughter kept the Eagles offense rolling, knocking down her fifth three of the game to push FGCU’s lead to 75-38.

Capping off an eventful debut for Dow, she checked back into the game, showing FGCU fans that she’s capable of grabbing a steal, running the fast break, missing her initial layup, grabbing her miss and laying it back in while drawing the foul to cap off her 14-point performance.

“China, off the bench, gave us a huge spark,” Smesko said. “She played great the last week in practice, and now, it’s translated into the game. That will be a great edition for us if she can continue to play like that.”

Knocking down 14 shots from long range while tallying 18 assists, the Eagles were able to defeat the Panthers 89-42.

After a quick one-game home stand, FGCU will hit the road to face Northern Colorado on Friday, Nov. 18 before returning to Fort Myers for the Gulf Coast Showcase kicking off on Nov. 25.