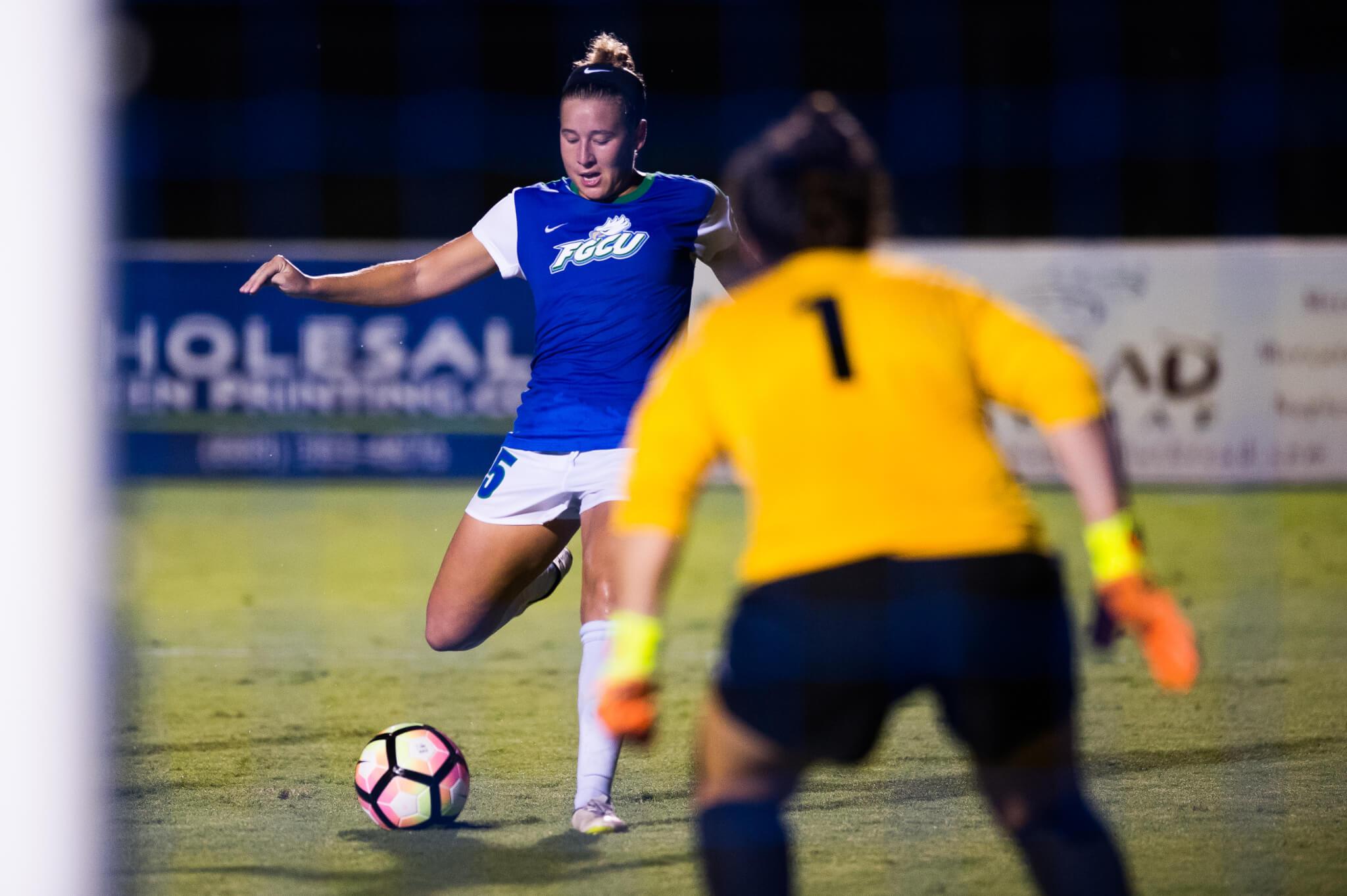 Due to excessive lightning during warmups, the Eagles matchup on Sept. 23 against Stetson was postponed to Oct. 19.

Lightning proved to be a factor once again, causing the game to be called with 5:14 left to play in the second half.

“I liked the way we played and pushed the tempo,” FGCU Head coach Jim Blankenship said. “We had a great start with two early, quality goals. We got the result and the three points and Tabby and Ems (Emilie Olsen) both had two goals each and they picked off right where they left off last game.”

After assisting Emilie Olsen’s opening goal, two-time Atlantic Sun Conference player of the year Tabby Tindell scored two goals in the first 20 minutes of the match, giving her the conference record for career points with 149.

Tindell made history once again finding Olsen for her second goal of the game, tying the FGCU program record for career-assist with 28.

“It’s just an honor, really,” Tabby Tindell said. “I’m fortunate enough to come to school where the team’s great and the coaching staff is great. I’m blessed to be here and I’m so happy I can contribute so much to this program.”

With a 3-0 advantage in the early going, the Eagles dominated the bulk of possession, keeping the Spartans from generating any sort of rhythm on offense.

Outshooting USC Upstate 14-1 in the first half and a holding a 4-0 advantage in corner kicks, FGCU went into the half up 3-0.

The second half proved to be the much of the same, as the Eagles continued to put pressure on the Spartans number one Brooke Bailey while Melissa Weck enjoyed a quiet day in the goal finishing the game with only three saves.

Six minutes into the second half, the Eagles found the back of the net again as Olsen bagged her second goal of the game, off of an assist by Tindell, bending the ball to Bailey’s right hand off of her fingertips into the goal to give the Eagles a 4-0 advantage.

Just one goal away from breaking the A-Sun career-goals scored record, Tindell and her teammates tried to set her up for a historic moment in her career, but they were unable to find the back of the net.

Outshooting the Spartans 25-3 with five minutes remaining the game, the officials called the game due to lightning in the area, giving the Eagles the first three points in conference play.

FGCU will now welcome NJIT to the FGCU Soccer Complex as they take on the Highlanders Sunday at 1:00 p.m. in its second conference game of the campaign.

“It’s always good going into conference and getting three points,” Tindell said. “Jim (Blankenship) says it all the time that we want to stay in front of the pack, you never want to let somebody else do your work for you, so we are going to continue doing that for ourselves and hopefully we have another great conference season.”