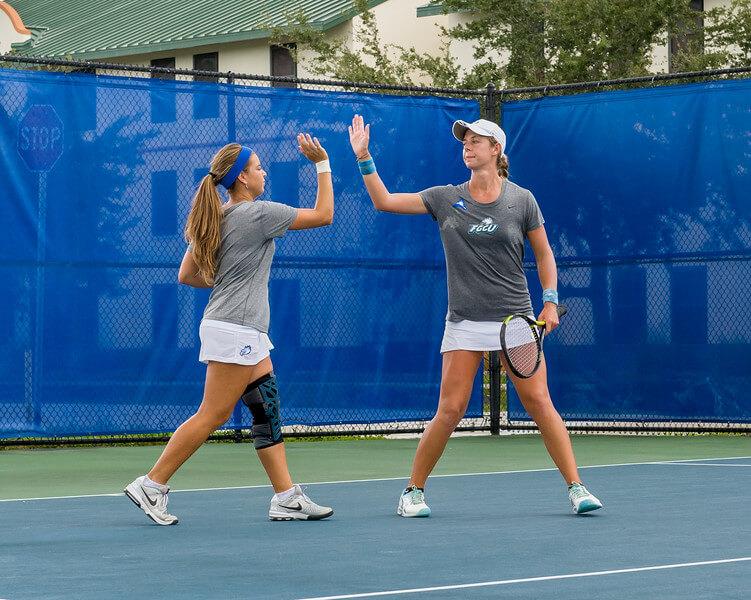 The effects of Hurricane Matthew may have diminished the original field of teams, but the FGCU women’s tennis team remained successful over the weekend. The team hosted a trio of teams including UCF, Minnesota and Stetson at the FGCU Tennis Complex Friday through Sunday.

“The ladies have made some great progress already this fall,” said FGCU head coach, Courtney Vernon. “They are committing to the plan and are learning to trust themselves on the court. I’m excited to see how they grow and what they choose to experience this year.”
For singles play, FGCU posted a 13-3 overall record over the weekend with nine of those wins coming in straight sets. The Eagles went a perfect 4-0 in singles matches vs. UCF, earning the program’s first win against the Knights.

Also, the Eagles went 5-2 in matches against Minnesota and 4-1 against Stetson.

In doubles competition, FGCU was just as successful as they were in singles play, winning 10 of 15 matches throughout the weekend.

The Eagles were led by 2016 ASUN All-Conference dup Julia Ascúa and Julianna Curtis, who went a perfect 5-0 as a pair, with three of those matches being decided by four or more points.

Next, the Eagles travel to Gainesville, Florida, for the ITA Southeast Regional from Thursday, Oct. 20 through Sunday, Oct. 23.