FGCU DII hockey picks up right where they left off 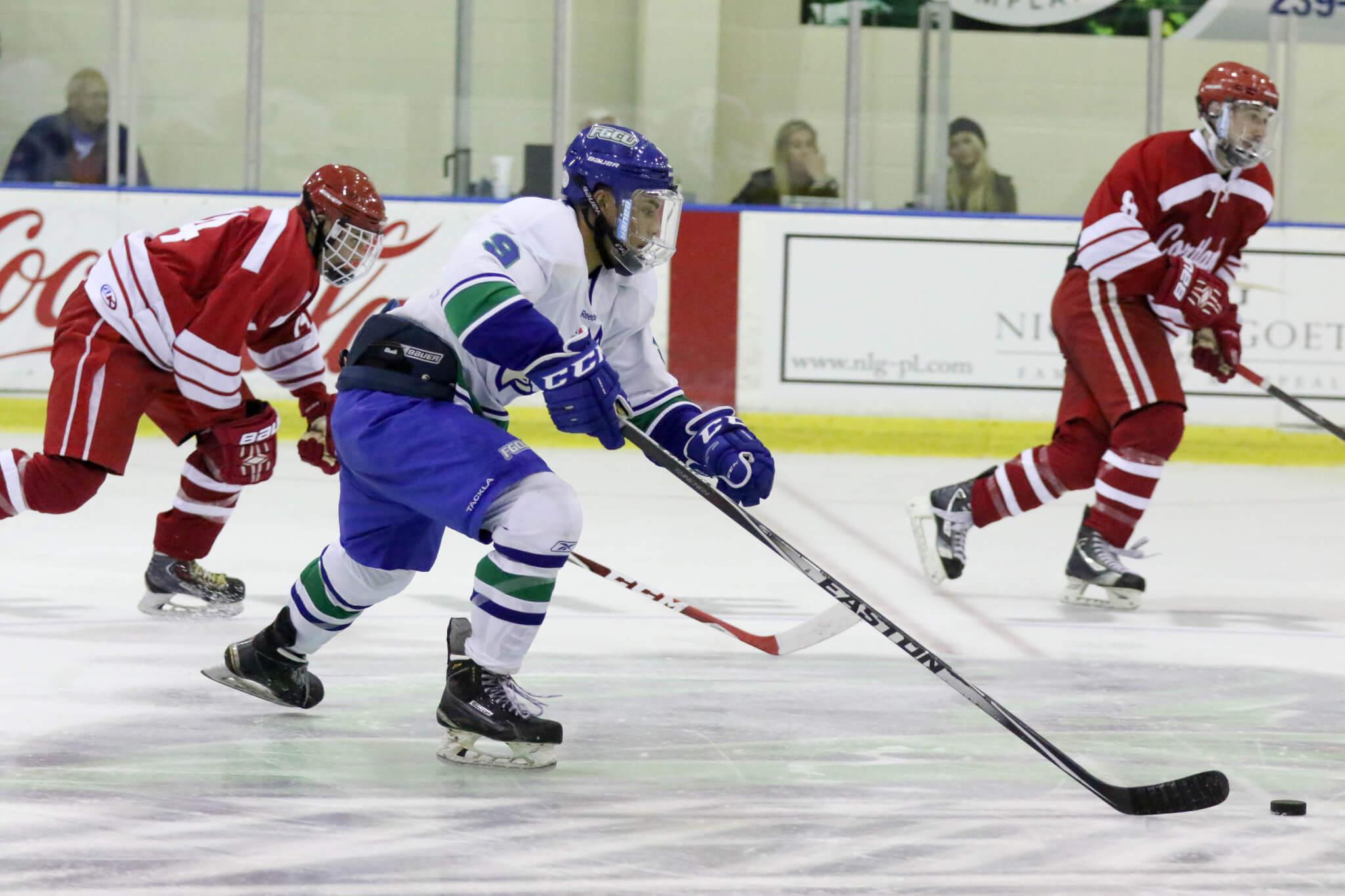 The Eagles started the New Year off the same way they finished 2016, winning.

Coming into the game, the Eagles’ record stood at the top of the ACHA at 13-0-2. The Eagles took their first win of 2017 against the University of Delaware Blue Hens in a 7-0 contest.

Bradley Rambhajan came in as the Eagle’s goalie in both games, boasting an impressive goals against average of 1.57, good for fourth in the ACHA, while Jake Wolff got the nod for the Blue Hens both nights.

As both teams looked to get their feet back under them after a nearly month-long break, early on consisted of a lot of physicality and heavy hitting.

Eagle’s defenseman Matt Salera wasted no time as he racked up four hits within the first ten minutes of play.

The Eagles were able to break the 0-0 tie with 8:04 left in the first period when Michael Chemello was able to get Wolff to bite on a deke and Klotz would burry a loose puck in the paint.

The Eagles would get a penalty with 1:03 left in the period and would take the remainder of it along with the 1-0 lead to the intermission.

The Eagles would kill off the remaining 57 seconds on the penalty kill and get a power play of their own soon after, but were unable to capitalize.

Soon after the power play, the Eagles would take a 2-0 lead when in tic-tac-toe fashion Jake Leonard would send it to Nathan Pelligra and then to David Wong who slipped it by Wolff who never stood a chance.

The next shift, the Blue Hens would get their best chance of the night on a cross-crease play where Rambhajan would flash the glove, leaving the Delaware forward with his stick over his head, looking up in disbelief.

With 2:44 left in the period, Mark Arnone snuck into the slot and fired a shot through Wolff’s fivehole to give the Eagles a 3-0 lead.

The Eagles weren’t done yet, as Arnone would set up Klotz for his second of the night on a back-and-forth passing play, as once again the fivehole of Wolff was the target.

Heading into the second intermission, the Eagles held a commanding four-goal lead over the Blue Hens.

The third period began much like the second period ended, as Klotz would find the back of the net via Wolff’s fivehole at 18:57, giving Klotz the hat trick.

Klotz wasn’t quite done exposing Wolff’s fivehole, as he added to his total again at 13:10 of the third period, extending the Eagles lead to six.

A mere 17 seconds later, Steve Noyes would rip a shot glove side and tickle twine for the Eagles seventh and final goal of the night.

The Eagles would take two penalties late to give the Blue Hens a 5-3 for a little over a minute, but Rambhajan and the Eagles defense stood tall to give Rambhajan his third shutout of the season.

In the second of the back-to-back series, the Eagles faced adversity for the first time at home but still took a 7-4 victory.

Rambahajan and Wolff both got their starts again in net for their respective teams.

The Eagles went down on the scoreboard early when the Blue Hens were able to score off of a deflection early on the power play.

In mocking fashion, the Blue Hens celebrated in a large jumping huddle, something they probably now regret doing.

The Blue Hens would score another off a deflection from a shot taken right in front of Rambhajan where the puck careened off an Eagles defenseman and in.

The Eagles wouldn’t go easily into the intermission, as they had multiple scoring chances fought off by Wolff, but finally at the 1:31 mark Josh Koerner would one time a puck by Wolff while on the power play after a nice cross crease pass by Leonard.

Unable to get on the board a second time, the Eagles went into the intermission trailing for the first time at home.

The Eagles would come out in the second with a fire lit under them, scoring five unanswered goals, four of which came in the first 6:20 of the second period of play.

Early on, at 19:15 Chemello would walk into the Blue Hens zone and rip a shot from the top of the circle on Wolff’s blocker side, and for his tying goal celebration they mimicked the Blue Hens’ over-the-top celebration from earlier in the game.

Three minutes later, Pelligra would find the puck on his stick at the point. While falling, he took a slapshot that found its way through traffic and into the back of the net, giving FGCU the lead.

The Eagles would score again, and in impressive fashion, as Shawn O’Meara in his debut muscled through two Blue Hens, then to the puck through the final defender’s feet and turning him inside out before roofing a shot to put the Eagles up two.

This would cause for the Blue Hens coach to call a timeout to try and get his guys back in the game. It didn’t work.

The Eagles would soon after the timeout score yet again when Klotz jammed a puck sitting in the crease into the back of the net.

The Eagles would add to their score at 3:56 when Brett Yochum fired a shot from the outside of the middle of left circle going blocker side on Wolff, who didn’t even have a chance to raise his blocker.

After an explosive offensive showing in the second, the Eagles carried a 6-2 lead into the intermission.

The Eagles looked to get out to a hot start to the third when Klotz would score on a breakaway, but the goal was taken away after a lengthy discussion amongst the officials who would rule that a hit to the head occurred prior to the goal, thus turning a goal into a penalty in the worst magic trick FGCU fans have seen this season.

Delaware would come within three goals of the Eagles as they scored on the power play they were gifted, making it 6-3.

A slew of penalties would be called in the next ten minutes with the Eagles able to kill them all off.

Wong would add another, then promptly get a penalty right after for unsportsmanlike conduct, which the Eagles would also kill.

The Blue Hens would score again with 57 seconds left but it was too little too late as the Eagles picked up the 7-4 victory, their 15th on the season.