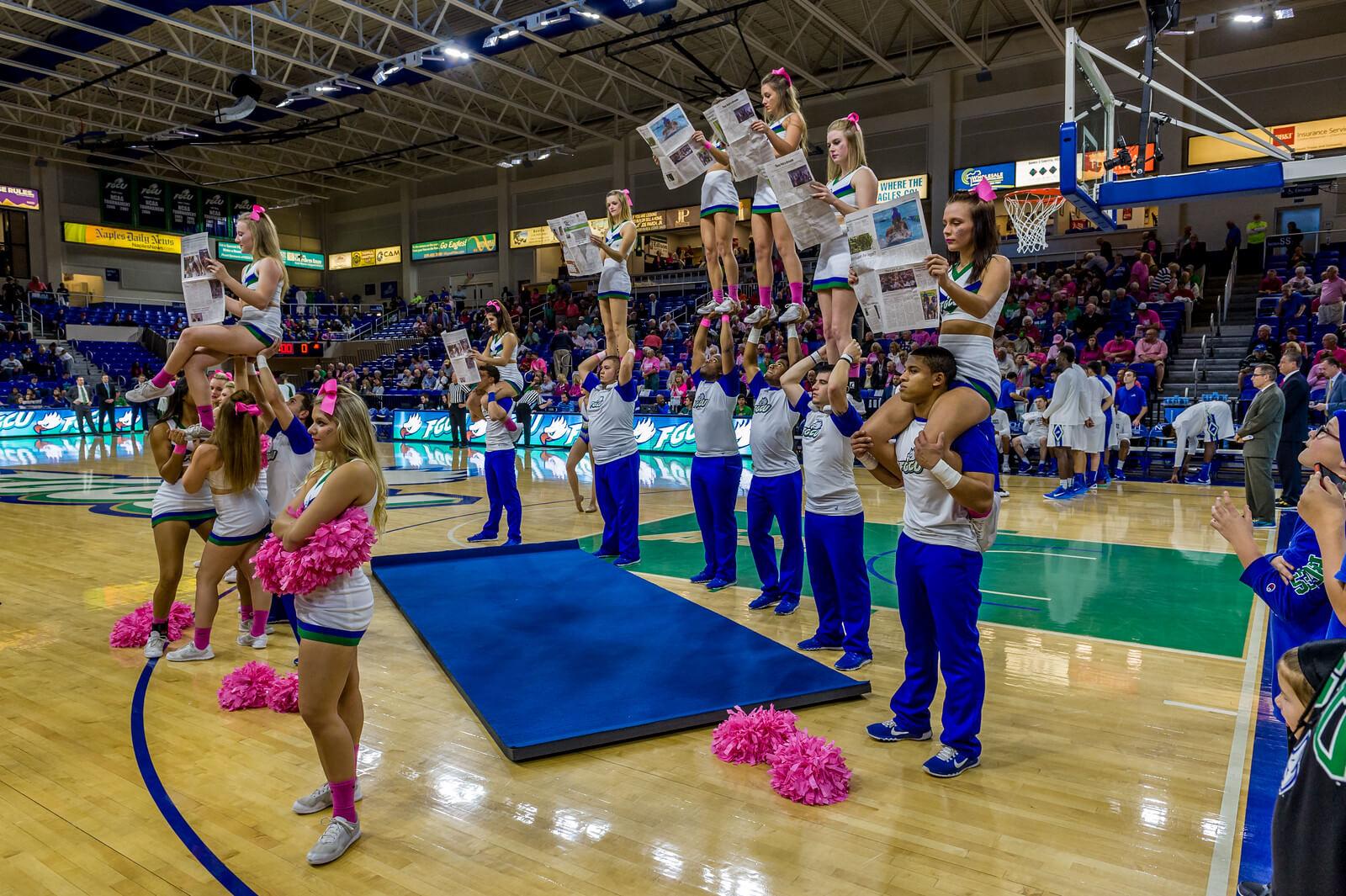 Who said cheerleading was just a girl sport? In the past few years, the number of male cheerleaders on the FGCU cheerleading team has climbed, almost doubling since last year. Caleb Houston has been cheering for the FGCU Eagles for four years now and let us know a little about how the program has grown.

“Being that I started cheering at FGCU the same year as the big Cinderella story, I have seen the program reach dynamics with more talented athletes with higher skill levels and the increase of male cheerleaders,” Houston said.

When it comes to tryouts, the male cheerleaders go through the process together but are asked different requirements. Male cheerleaders are needed and don’t need a lot of experience to try out.

“Normally consisting of a jump, any tumbling and any stunts requirements,” Josue Rodriguez said of the tryout process. “There’s no previous skills needed. You can always tryout. We had a couple guys who were football players and learned a lot from camp.”

More coed stunting and more difficult tricks are just some of the benefits of having a coed team.

“With going from a squad of roughly four males on the team to 10 has been a huge impact on the program,” Houston said. “It allows more crowd appealing stunts.”

When he first began cheering for FGCU, Houston was only one of about four male cheerleaders and has stuck with the program through its growth.

“College game days is what we FGCU cheerleaders focus on and having more guys gives our program opportunities to push our skill levels,” Houston said.

This year, more guys were interested in trying out and more came out to the camps to learn and build up their strength and skills. This helped add to the additional growth the team hoped for this year.

“We are able to showcase more collegiate-style basket tosses and pyramids,” Houston said. While the team as a whole benefits from the added strength more male cheerleaders bring, the actual cheerleaders themselves can also benefit from the scholarships offered.

Last year, a $500 scholarship was given to each male cheerleader.

As the school and team continue to grow, the cheerleaders want to reach out to more males and encourage them to not to be afraid to come out and tryout for the team. They are always looking for new people and new talent to better the team.

“ We hope to always gain more skills and change every game day experience,” Rodriguez said. “This year, we have a lot of double headers, and we try to change our stunts in between the first game and the second game to give our fans a different game day feel.”

Rodriguez and Houston were very hopeful that the team would only grow and achieve more as each season goes by.

You can see the FGCU Cheer Team at the basketball games, cheering on the FGCU Eagles.