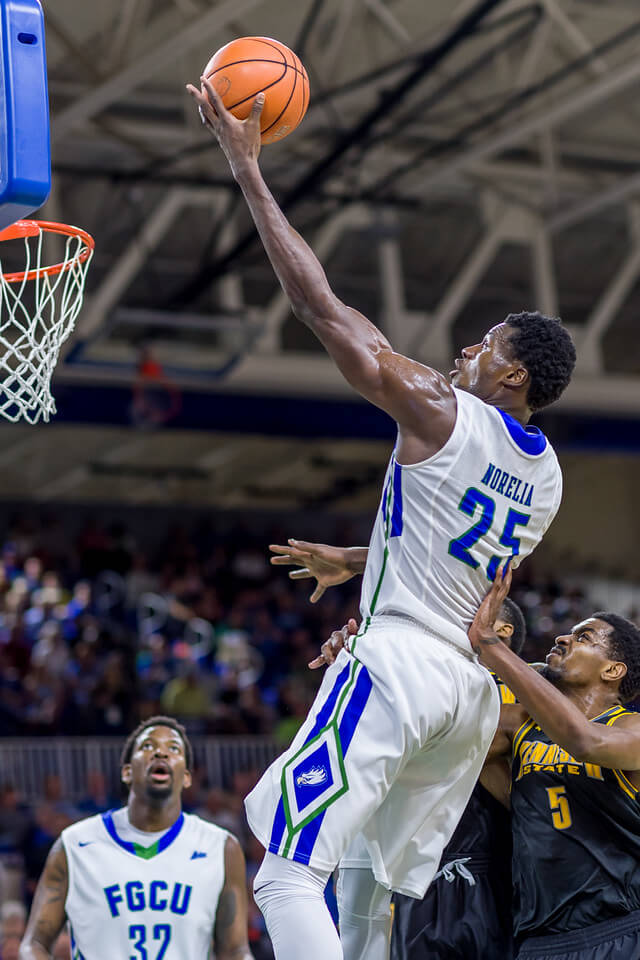 Representing FGCU in the Atlantic Sun All-Conference First Team was double-double machine Marc-Eddy Norelia. His selection marks the fourth consecutive year that the Eagles have had at least one player represented in the first team.

This season, Norelia averaged 17.1 points and nine rebounds per game, while setting a program record for double-doubles in a season with 12, breaking the previous record of nine, held by Robinson Tisme in the 2002-03 season. In conference competition, Norelia averaged 18.5 points and 9.4 rebounds per game, ranking him second in the conference in rebounding. Norelia also earned the A-Sun Player of the Week award three times throughout the regular season.

The second Eagle who received postseason recognition was freshmen Zach Johnson. Johnson was named to the A-Sun Conference All-Freshmen Team after finishing his first season for FGCU averaging 10.7 points and 3.2 assist per game. Johnson went on a tear offensively during the last 17 games of the season, finishing in double figures in the last 14 games. The two-time A-Sun Newcomer of the Week also led the conference in assists with 49 assists in conference play.

“The recognition for Marc-Eddy (Norelia) and Zach (Johnson) is extremely well-deserved,” said FGCU head coach Joe Dooley in a recent press release. “Marc-Eddy (Norelia) has put together one of the best years in program history and has been at the top of his game since the season started. Zach (Johnson) really came on strong as the year went along and accelerated his game during conference season.”

Now, the Eagles will turn their attention to the A-Sun Conference Men’s Basketball Championship, facing off against Kennesaw State in the first round of the tournament at 7 p.m. Mar. 1 at Alico Arena.