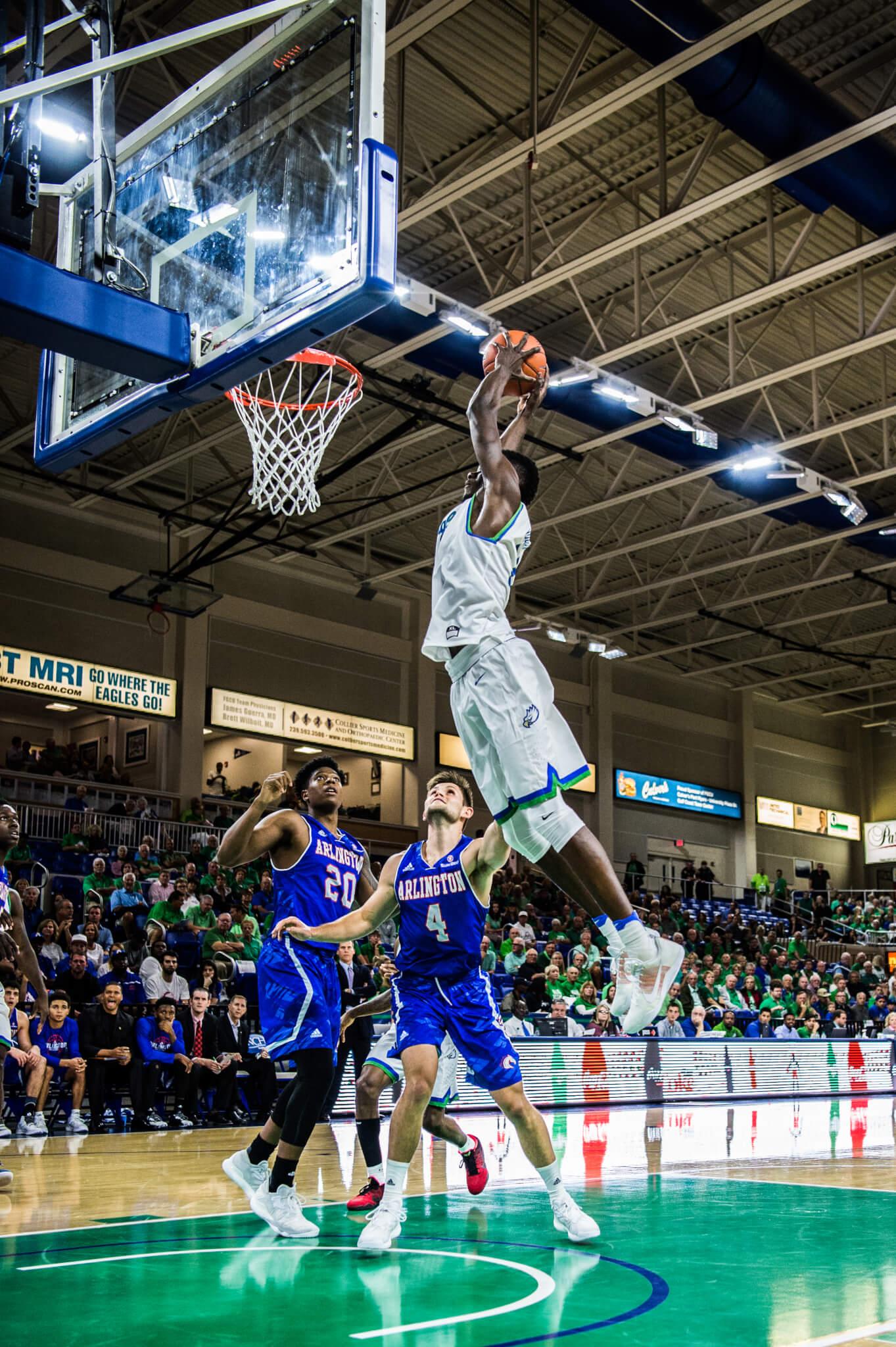 With non-conference play in its rearview mirror, the FGCU men’s basketball team opened up Atlantic Sun Conference play with an 89-88 victory over Stetson in a rematch of last year’s ASUN Championship game.

Determined to avenge their championship loss, the Hatters held an 85-77 lead over the Eagles with 1:21 remaining in the fourth.

Coming out of a Stetson timeout, Christian Terrell knocked down a shot from long-range to bring FGCU within five with 1:06 remaining.

Following the Eagles final timeout Stetson’s Divine Myles knocked down one of his two free throw attempts and on the other end, Demetris Morant snatched an offensive board and was fouled on his ensuing shot.

Morant knocked down both of his shots from the stripe and Terrell intercepted the Hatters’ inbounds pass and passed the ball to Goodwin who was fouled.

Trimming the deficit to 89-84 after Goodwin knocked down both of his free throw attempts with 36 seconds remaining, Terrell stole the Hatters inbound again setting up Goodwin to split between two defenders and knock down and uncontested layup.

Deadlocked at 86 apiece with 9 seconds left, Stetson quickly knocked down a layup leaving 3.6 seconds on the clock.

3.6 seconds was more than enough time for Goodwin to propel the Eagles past their opponent in game-winning fashion for the second time this season, as he received the inbound, ran up to just outside the arc, pump-faked, leaving a Stetson player airborne, and drew contact sending him to the stripe for three shots with .6 seconds left.

Goodwin sucked the air out of Edmund’s Center, knocking down all three free throws capping off the Eagles’ 7- second eight-point comeback to give them their first victory in ASUN play.

Scoring 20 or more points for the fifth time this season, Goodwin led a quintet of double-figure scorers, finishing with 20 points while dishing out seven assists.

Just shy of Goodwin’s 20 points, Rayjon Tucker scored 19 points on 8-12 shooting in his third career start, followed by 13 points from Antravious Simmons, 16 points from Morant and 16 points from Terrell.

“We got off to a good start, but Stetson countered and got us back on our heels in the 2nd half,” FGCU head coach Joe Dooley said to FGCU Athletics. “We really made some plays at the end. Guys stepped up, and it wasn’t just by making free throws. It was a very competitive game.”

Despite blowing an eight-point lead with 1:21 remaining, the Hatters enjoyed a hot night from the field, shooting 55.6 percent while shooting 39.1 percent from long-range.

A close game through the full 40 minutes that saw the score tied five times and seven lead changes, the Eagles took advantage of a 50-36 advantage in the paint, and 21 second-chance points to earn their first conference win of the season.

FGCU will now head to Kennesaw, Georgia, for game two of their three-game road trip, as they face Kennesaw State on Thursday, Jan. 12 at 7 p.m.