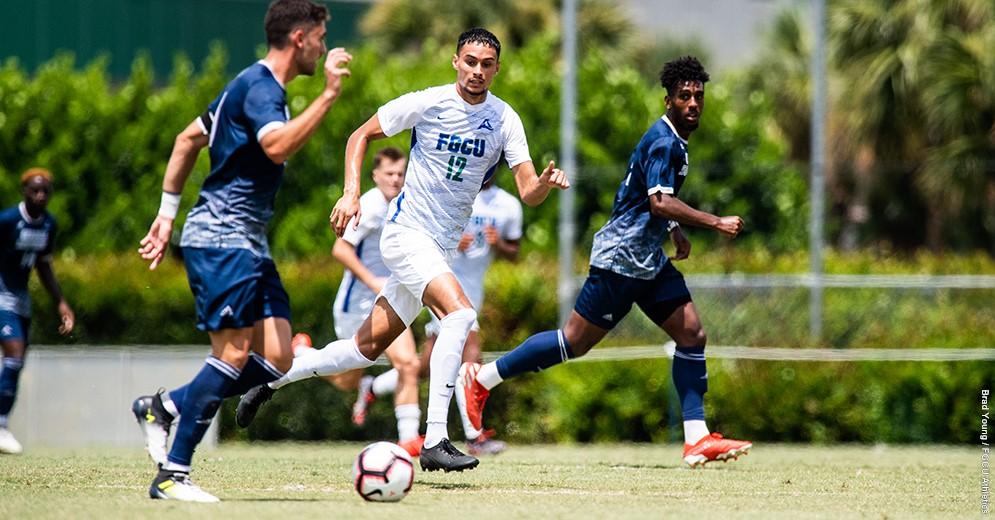 Photo Provided by FGCU Athletics // Ryan Medilah provided the offense for the Eagles, tallying the most shots in the losing effort to Cal St. Fullerton.

The FGCU men’s soccer team (3-2-1) lost their second-straight game, this time dropping a contest to No. 23 Cal State Fullerton Sunday night by a score of 2-0.

Throughout the first twenty minutes of play, both teams slowly tried to build themselves into the game and both had scoring opportunities.

FGCU was caught offside three times within the first eight minutes by the referee, and then CSU countered with a brief spell of quality possession where they attempted two shots at the FGCU goal.

CSU caught momentum after converting a penalty given from a foul by senior Ernest Mitchell inside the six-yard box in the 23rd minute. Mitchell was shown a red card by the referee, and FGCU had to play with 10 players for the rest of the match.

FGCU’s offense tried to keep them in the game but was caught offside two more times by the referee.

The best scoring opportunity for FGCU was by senior Ryan Medilah in the 31st minute. The shot went wide, and the team was not able to capitalize on it.

The second half saw the Eagles set up plenty of dangerous opportunities to score, but FGCU was not able to capitalize on them.

Cal State Fullerton was able to put the game to bed with a goal in the 72nd minute.

Following their road trip, the Eagles return home with a chance to stop their two-game losing streak with a matchup against No. 16 UCF on Wednesday, Sept. 18, at 7 p.m.