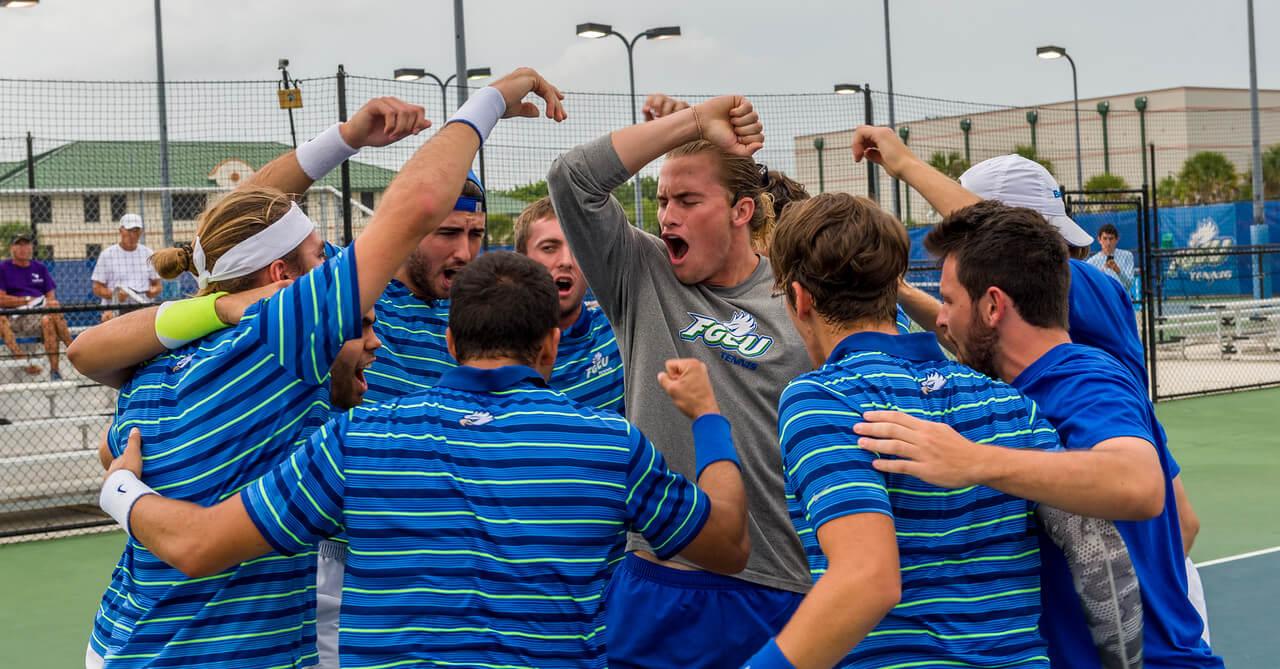 If reaching the mountaintop is considered tough, then staying at the top (with an enormous target on your back, no less) takes the cake. The FGCU men’s tennis team had its cake and ate it too, after defeating Stetson this past Saturday to clinch back-to-back Atlantic Sun regular season championships.

Led by seniors Lucas Vaz, Ricky Ventura and Eduardo Alfonzo, the Eagles handed the Hatters their first conference loss of the season while defending home court to finish a perfect 9-0 for the season right here in Fort Myers, a first since joining the A-Sun in 2007.

Vaz and Ventura took home the first doubles game in a 6-2 win, followed by a doubles win from Alfonzo and freshman Javier Fernandez to put the Eagles up 2-0 overall. A singles win by Ventura put the team on the brink of gold, and the celebration ensued when Andres Alfonzo, Eduardo’s younger brother, won his own singles contest to take home the fourth and final win needed to defeat Stetson.

With both teams entering Saturday undefeated in conference play, this was essentially the de facto conference championship match. And, the Eagles brought their A-game, securing the title before all the games had finished.

The seniors, who were commemorated prior to first serve for Senior Night, will go out leaving a winning legacy here at FGCU. Repeating as champions is no small feat, and the underclassmen, including upcoming seniors Andres Alfonzo and Chris Perrigan, will lead the charge for an unprecedented 3-peat next season. This is especially unprecedented when considering how far the program has come since head coach CJ Weber arrived in 2011, inheriting a struggling team that had just finished dead last in the A-Sun at 3-18. Within three years, Weber had recruited internationally and built a conference contender. After last season’s historic championship, the team made their first NCAA tournament appearance, reaching the round of 32. Now, just five years after taking the reins, Weber is setting the stage for, dare I say, a dynasty.

A label like that would be more than deserved if the Eagles could pull off the hat trick next spring. As for now, the men’s tennis team will enjoy this triumph before heading to Spartanburg, South Carolina for the A-Sun Conference tournament, with an automatic berth in the NCAA Tournament hanging in the balance. As a result of winning the regular season title, the Eagles will hold the No. 1 seed and play in the semifinals on Saturday, April 23. Two more wins could not only send the boys back to the tourney, it would also set a Division I program record with an 18-win season — as if this team hadn’t already broken enough records.

This is the "wpengine" admin user that our staff uses to gain access to your admin area to provide support and troubleshooting. It can only be accessed by a button in our secure log that auto generates a password and dumps that password after the staff member has logged in. We have taken extreme measures to ensure that our own user is not going to be misused to harm any of our clients sites.