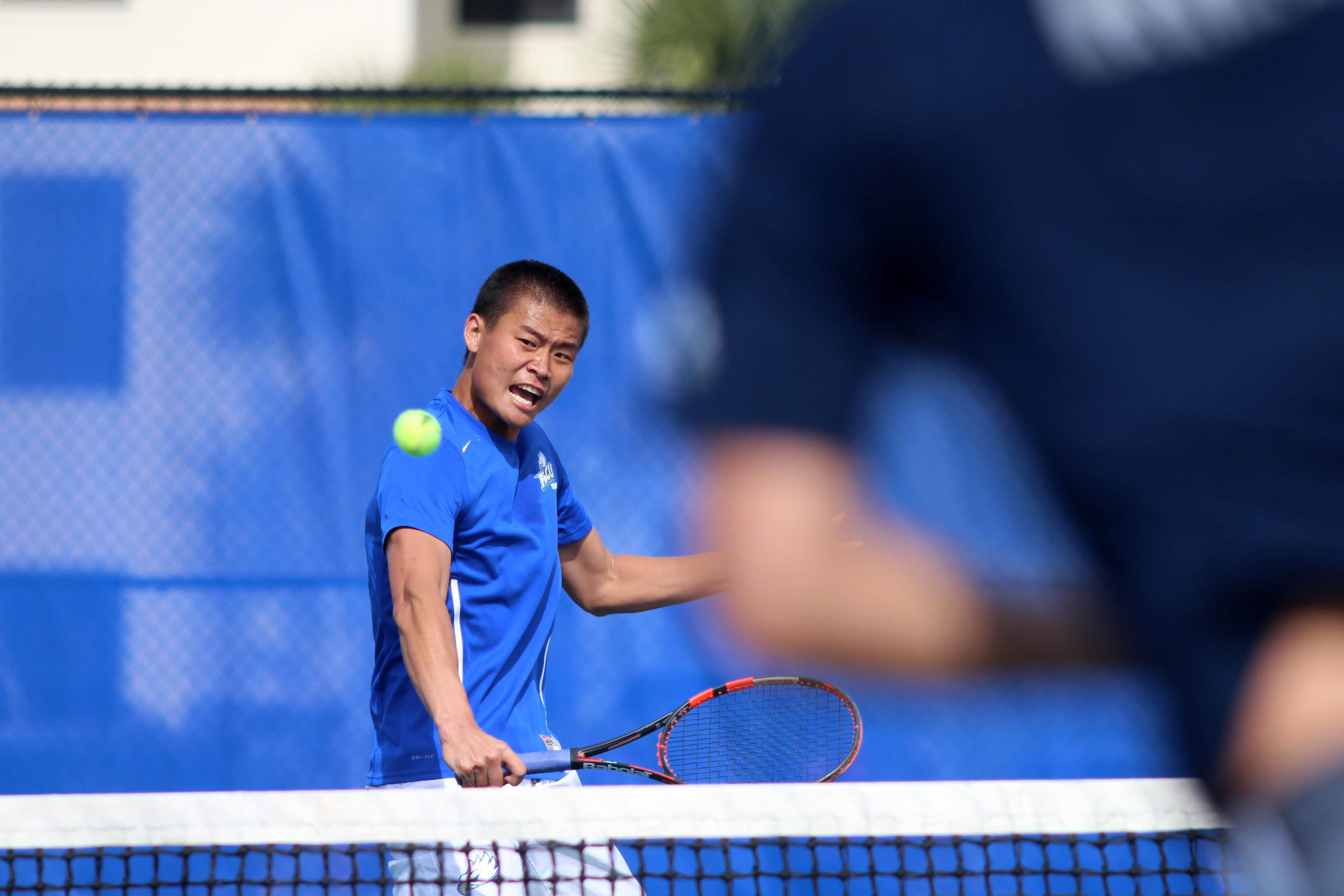 The Florida Gulf Coast University men’s tennis team (1-1) has its first home dual match of the spring season against Florida Atlantic University (1-2) on Jan. 30. The team is coming off a mixed weekend with one loss and one win.

“The guys have learned a lot about themselves in the first week and a half, which is a great advantage to challenging the guys as much as I have in the beginning,” coach CJ Weber said. “You learn everything about the guys in a match where you are really pushed.”

On Saturday, the team lost 4-0 to No. 35 Florida State University (5-0). The Eagles started the match by losing the doubles point and were not able to convert in singles play.

“We were ready but we got their best,” Michael Beiler said. “We knew we were a good enough team to beat them but it didn’t go our way.”

Despite not having any wins in singles, the team had close matches. Sophomore Andres Alfonzo came close in his match against FSU’s Marco Nunez. He lost the first set 5-7, won the second set 6-2, but the match was unfinished at 3-1 in the third set.

“We definitely didn’t show up for doubles,” Weber said. “We got waxed in doubles and we certainly didn’t expect that. Our mental preparation wasn’t on, but we responded well in singles. Throughout the course of the match it really felt like it was just small things that needed to happen to turn the match around.”

“I have seen our program grow in the last four years,” Beiler said. “This is the best team I have been on and we are probably the most improved team in the nation. The success we have had over the last couple of years against really good teams has helped us a lot.”

After the match against FSU, the team defeated Florida A&M University 7-0 on Sunday. The team started the match off on a positive note by winning the doubles point.

“I was impressed with how much energy and intensity they put into that match after the disappointing loss,” Weber said. “We were really down after the match against FSU and playing a match the very next day can be a little tricky, but the guys were motivated to do what they were going to do that day. We swept them and that always feels good regardless.”

Bao and senior Jordi Vives won their doubles match 6-3. Juniors Ricky Ventura and Lucas Vaz secured the doubles point with a 6-4 win over their FAMU competitors.

“We came into the match hungry to get a win,” Perrigan said. “We kind of went into the match trying to go for it all and not letting them get any leads. We basically tried to take it all from them and not give anything up.”

In both matches, the team was able to fuel off of the support from their teammates who were not competing that day.

“It is always cool to cheer the guys on,” Beiler said. “It just creates a really cool atmosphere. It takes every guy on the team to get a win… Support from the team can really be a game changer.”

With two weeks to prepare for the match against FAU, the team is using the time to recover and focus on the rest of the season.

“We need to just keep staying focused and being a team.” Perrigan said. “When we are together and know each other’s thoughts and goals, we perform our best. If we just relax and stay focused and practice hard for the next couple weeks before our first home match against FAU, we should be ready for it and take it to them.”