Moving on: FGCU women advance in WNIT with win over Bethune-Cookman 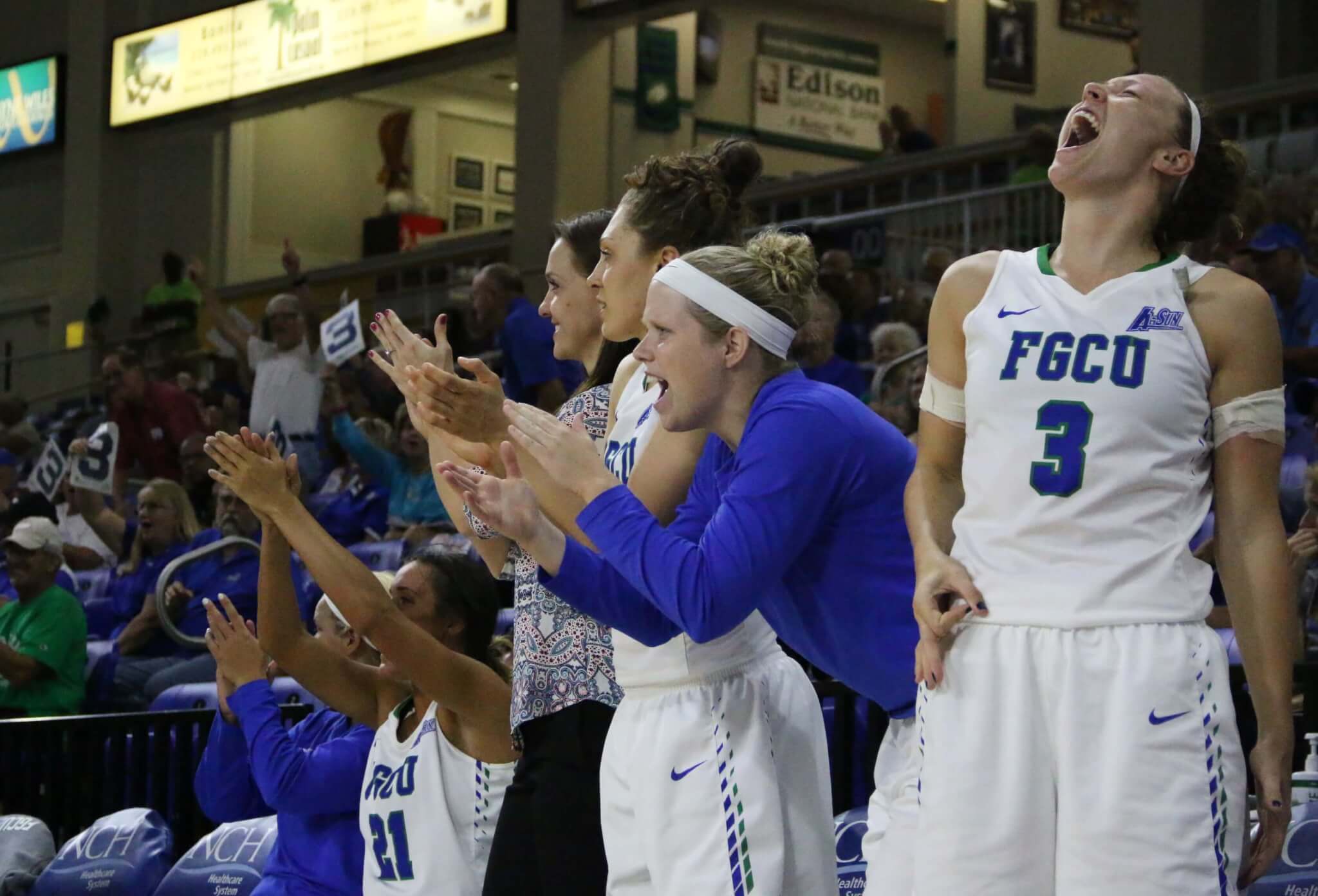 The FGCU women’s basketball team cruised into the second round of the Women’s National Invitational Tournament with a 78-51 win over Bethune-Cookman in the Eagles’ first round matchup at Alico Arena Friday night.

FGCU’s raining threes mentality helped it establish its game offensively against Bethune-Cookman, as it sparked multiple runs around back-to-back shots from long range on various occasions throughout the contest. Every time the Wildcats would get some points on the board, the Eagles would respond with a three to settle back into rhythm.

With a career-high 12 assists in the contest against the Wildcats, Atlantic Sun Defensive Player of the Year DyTiesha Dunson became the FGCU women’s basketball team all-time assist leader with 425 assists, surpassing the previous leader, Shannon Murphy, who was in the stands.

“It’s cool,” Dunson said about becoming the all-time leader. “After every game, my mom would tell me how close I was to breaking the record, so it was cool.”

Propelling the Eagles in their victory over the Wildcats was two-time A-Sun Conference Player of the Year Whitney Knight, who finished with 21 points, 16 rebounds and four assists. Knight’s double-double against Bethune-Cookman marked her sixth double-double of the season.

“I thought this was one of Whit’s (Knight) best games of the season,” Smesko said. “She had great energy right from the very beginning, her court vision was outstanding, and she just played an all-around outstanding game.”

Joining Knight and two other Eagles in double figures was Katie Meador, scoring 17 points on 6-9 shooting. Meador also grabbed five rebounds and shot a perfect 4-4 from the free-throw line.

Haley Laughter also played a key role for FGCU, providing scoring off the bench in the second half by knocking down four threes to end the night with 12 points on 4-5 shooting from behind the arc.

Taylor Gradinjan also provided some momentum building offense throughout the game, knocking down three shots from long range to end the night with 10 points and grabbing four rebounds.

In the first minute of action, Bethune-Cookman scored four points to gain its only lead of the night. Knight would hit a three moments after to spark the Eagles’ first quarter run. Meador played a major part in FGCU getting ahead early on, coming off the bench scoring 10 points with 4-6 shooting from the field.

“I like to think of myself as a super energetic person,” Meador said. “So, when I go in, I like to bring that energy with me, so if I can get my team on board, we play like we did tonight. And, we play with a lot of energy.”

At the end of the first quarter, FGCU led Bethune-Cookman 22-10.

The second quarter was a completely different story for both teams. It seemed like Azul’s end-of-quarter festivities put a lid on both baskets because neither side could find a way to score. The teams combined for just 20 points in the quarter, shooting a combined four for 24 from the field to close out the half. After the Eagles broke their scoring drought with five minutes remaining in the second half, the Wildcats went on a little run and cut FGCU’s lead to six, going into the half down 29-23.

During the offensively mediocre second quarter, Kaneisha Atwater checked out of the game with 7:24 left to go and didn’t return due to a knee injury.

“We won’t know the severity of her knee injury until we can get a closer look at it,” Smesko said.

The third quarter was all Knight, as she dominated offensively to push the Eagles’ lead further and further from the Wildcats. Knight started off the quarter with four consecutive makes on the offensive end, and she ended the quarter with 15 points and four rebounds.

“My teammates were getting me the ball,” Knight said. “When I was open, I was able to attack them and get some easy buckets, and I just started getting in a rhythm.”

At the end of three periods, FGCU led Bethune-Cookman 56-41.

The Eagles wouldn’t let their foot off the gas in the fourth quarter, with Laughter knocking down a three, and on the ensuing Eagles’ possession, Haas knocked down one of her own to really begin to put the game out of reach. Laughter knocked down two more shots from behind the arc in the quarter, as the Wildcats just couldn’t keep up with the Eagles offensively, eventually falling to FGCU 78-51.

With the, FGCU moves to 5-0 all-time against Bethune-Cookman. FGCU will host Wake Forest in the second round of the WNIT at 7 p.m. Monday, March 21 at Alico Arena.

“I’m generally excited about being in this tournament,” Smesko said. “We would like to see how far we can keep this thing going, and we our hoping to continue to extend the season for our seniors.”