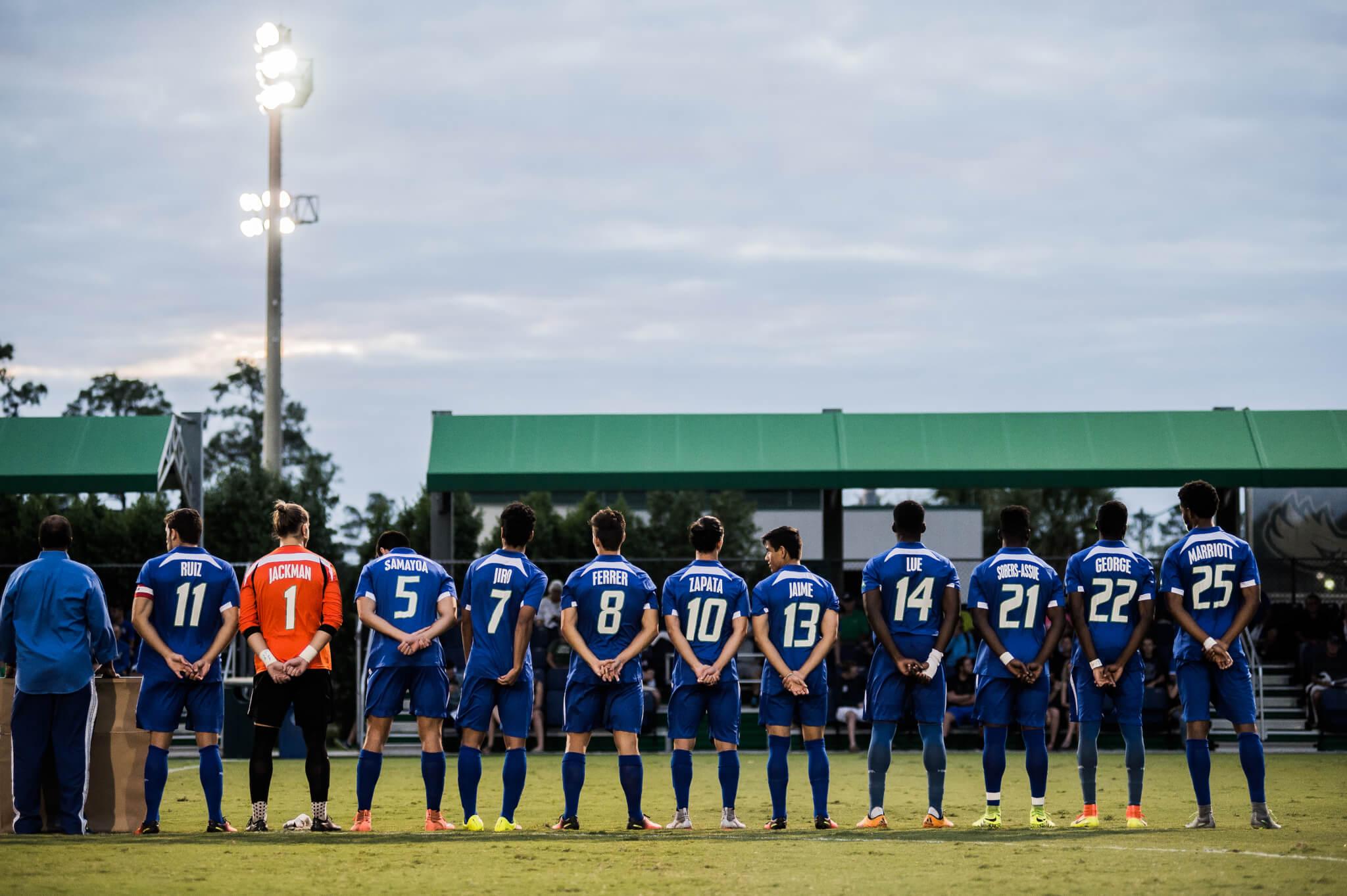 Moving up to No. 11 in the National Soccer Coaches Association of America national top-25 prior to the match, the FGCU men’s soccer team lost its 11 game win-streak, falling to UNF 3-2 on Tuesday night losing their first ASUN conference home regular season game since 2008.

“A lot of lessons were learned tonight,” FGCU head coach Bob Butehorn said. “Hats off to North Florida. They came out. They played really well, and they responded from two goals down.”

With both sides coming into the matchup 2-0 in conference play, the Eagles grabbed a two-goal lead in the first 12 minutes of the match. Despite being down 2-0, the Ospreys rode two goals from Adrian Nunez en route to completing a 3-2 comeback.

Coming into the match tied with Temple’s Gomez Sanchez for the national lead in goals scored, Ruiz regained the lead striking a volley from 20 yards out in the first 18 seconds of the match before burying the ball in the top shelf of the net with his left foot to put the Eagles up 2-0 with his 13th and 14th goals of the season.

GOOOAAALLL @FGCU_MSoccer !!! @AlbertRuiz95 with his 2nd of the night, 14th of the year as @Asobe12 lays it off, Ruiz left foot to top corner pic.twitter.com/UJcHhrnEdf

With two early goals to show for it, the Eagles dominated possession in the first 25 minutes of the match before Adrian Nunez scored a rebound goal off of the initial save by Sawyer Jackman to bring the Ospreys within one.

GOOOAAALLL @OspreyMSOC !!! @AdrianNunez96 scores a crucial goal for UNF to cut the deficit to 2-1 at FGCU. Begley had initial shot saved pic.twitter.com/C7tYThG3Pv

Nunez’s goal sparked a flame under UNF as they consistently threatened the Eagles backline as they searched for the equalizer going into the half down 2-1.

Coming out of the half with the same offensive pressure they applied in much of the first half, Nunez secured his brace in the 58th minute to bring the Ospreys level.

Seven minutes later, Joshua Castellanos completed the comeback for UNF, sparking the first of many scuffles in the remaining 26 minutes of the match.

With blood boiling and emotions running high for an Eagles side that had their 11-game win streak on the line, FGCU failed to bury one in the back of the net, despite a barrage of chances, unable to unnerve the UNF backline and second half substitute goalkeeper Tord Pederson.

With a possible equalizing goal in the last five minutes of the half from the penalty spot when Pederson brought down Ruiz, the match official opted to not blow the whistle leading the nation’s highest scoring offense to defeat.

Now 2-0-1 in conference play behind NJIT and UNF, the Eagles welcome USC Upstate on Saturday, Oct.18 in their final home game of the regular-season.

“A streak is a streak,” Butehorn said. “I look at just trying to win games and be on top when it matters. It’s not like we are going to go to a funeral. We still have a very good team. I guarantee that the next game will be something that I would not want to be the opposition against because they are pretty hungry now.”