No. 16 FGCU takes heartbreaking loss to No. 1 UNC 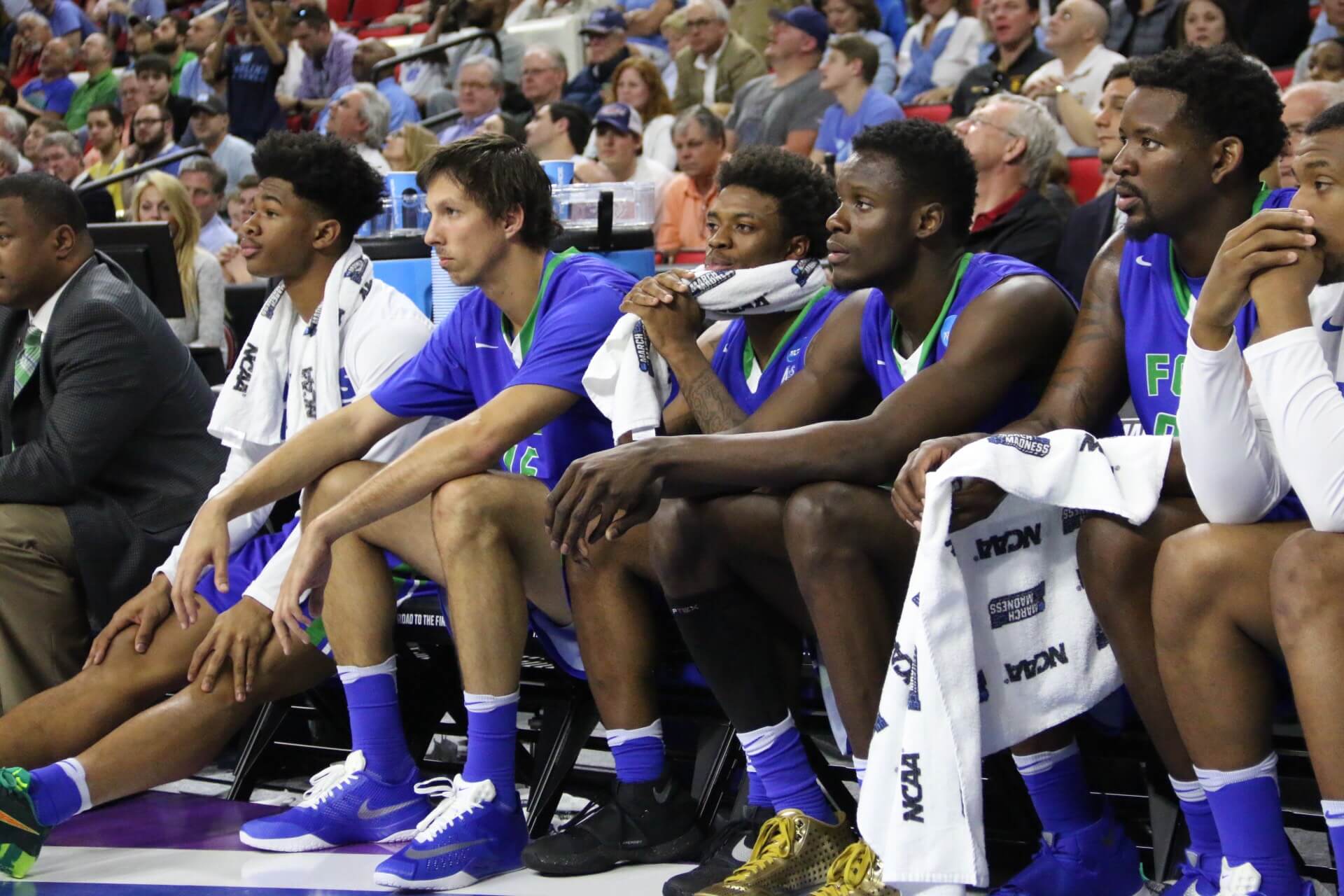 RALEIGH — The No. 16-seeded FGCU men’s basketball team’s season came to a close Thursday night after falling to No. 1 UNC in Raleigh, North Carolina.

A final score of 83-67 may have shown the winner of the game but did not reflect the competitiveness of the battle. The game resembled nothing of a First Round No. 1-seed vs. 16-seed match-up. The teams battled within single-digits for a majority of the night.

UNC, a school located about 20 miles away from Thursday’s venue, was basically at home in the Raleigh arena, flooded with neighboring fans repping Carolina blue. Across from FGCU’s bench, you could see one section of FGCU blue and green, a section filled with students and fans that made the 15-hour drive to watch their team face the Tar Heels.

The game opened with a three-point shot from FGCU — a shot answered by a dunk from UNC on the other end. This back-and-forth play continued through the half. The teams seemed evenly matched with occasional leads by UNC of six or eight points.

“We played hard,” said FGCU head coach Joe Dooley. “The guys competed and played as hard as they could, but we lost to a better team.”

Christian Terrell led FGCU through the night, ending with a team-high 15 points. He handled the ball up the court, around and through UNC defenders. Terrell scored in double-digits for the 25th time in the team’s 35th contest this season.

The Eagles took care of business on the defensive end as well. FGCU pulled down 28 defensive rebounds. For a team with less height, this meant boxing out and proper positioning as well as being there to challenge the shot.

When America finds out that #DunkCity can play defense too.

“We had our defense going,” senior guard Julian Debose said. “We were getting rebounds, sharing the ball (and) sharing in multiple ways. It was all you could ask for coming out against a one seed.”

At the half, FGCU trailed UNC by one point and was shooting 60 percent from the field. Of FGCU’s 40 points at the half, 22 came from the paint, despite UNC’s height advantage.

60% for #FGCU is the highest any opponent has shot in a half against UNC in the NCAA Tournament in 59 games. #MarchMadness

In the second half, UNC came out with a more determined approach.

“We weren’t nervous at half,” UNC senior guard Marcus Paige said. “But, we were playing a little bit tight the first half as a one seed. We were kind of tiptoeing into the game; they were the aggressor. They were taking out us instead of us taking out them. I think that was the biggest difference from the first half to the second half. We started playing our brand of basketball.”

After two jumpers, one from behind the arc, UNC found a six-point lead to open the second half — a lead that would only continue to grow.
“They just stepped it up another level,” Debose said. “They rebounded a lot better, and they just stayed persistent.”

On the defensive end, UNC began to rebound the ball and close out on players, tightening the seams. UNC guard Theo Pinson said that it seemed like his teammates had jitters the first half.

“We knew what we had to do defensively,” Pinson said. “It really looked like it was just jitters for everyone, but once we got over them, everyone came out of the locker room and was really upbeat. Everyone looked comfortable, and it showed in the second half.”

UNC had five players score at least 10 points. Its second half performance capitalized on FGCU’s deteriorating rebounding and energy as the game went on.

FGCU redshirt sophomore Kevin Mickle had a huge game. His six points and two rebounds in addition to solid defense was vital to FGCU’s successful play.

UNC finished the game with a 16-point win, a margin not reflective of the first half that was played Thursday night in the PNC Arena.

Florida Gulf Coast was trending on Twitter and viewers everywhere thought they were going to watch history happen — that a No. 16 seed would beat a No. 1 seed for the first time in NCAA history.

For many FGCU fans, this game means Eagles basketball is alive and well, even if they aren’t the Dunk City team the world saw in 2013.

FGCU moves to a 3-2 record in program NCAA play. The Eagles will lose two seniors this year: Debose and Filip Cvjeticanin.

“We got a lot of young guys,” Dooley said. “Hopefully, this is a learning experience for them.”

FGCU is returning 14 players next season, including Antravious Simmons, Mickle and Terrell.

Simmons feels that the team’s age puts the Eagles in a better position for success in years to come.

UNC will play the winner of the No. 8 USC and No. 9 Providence game on Saturday in Raleigh.