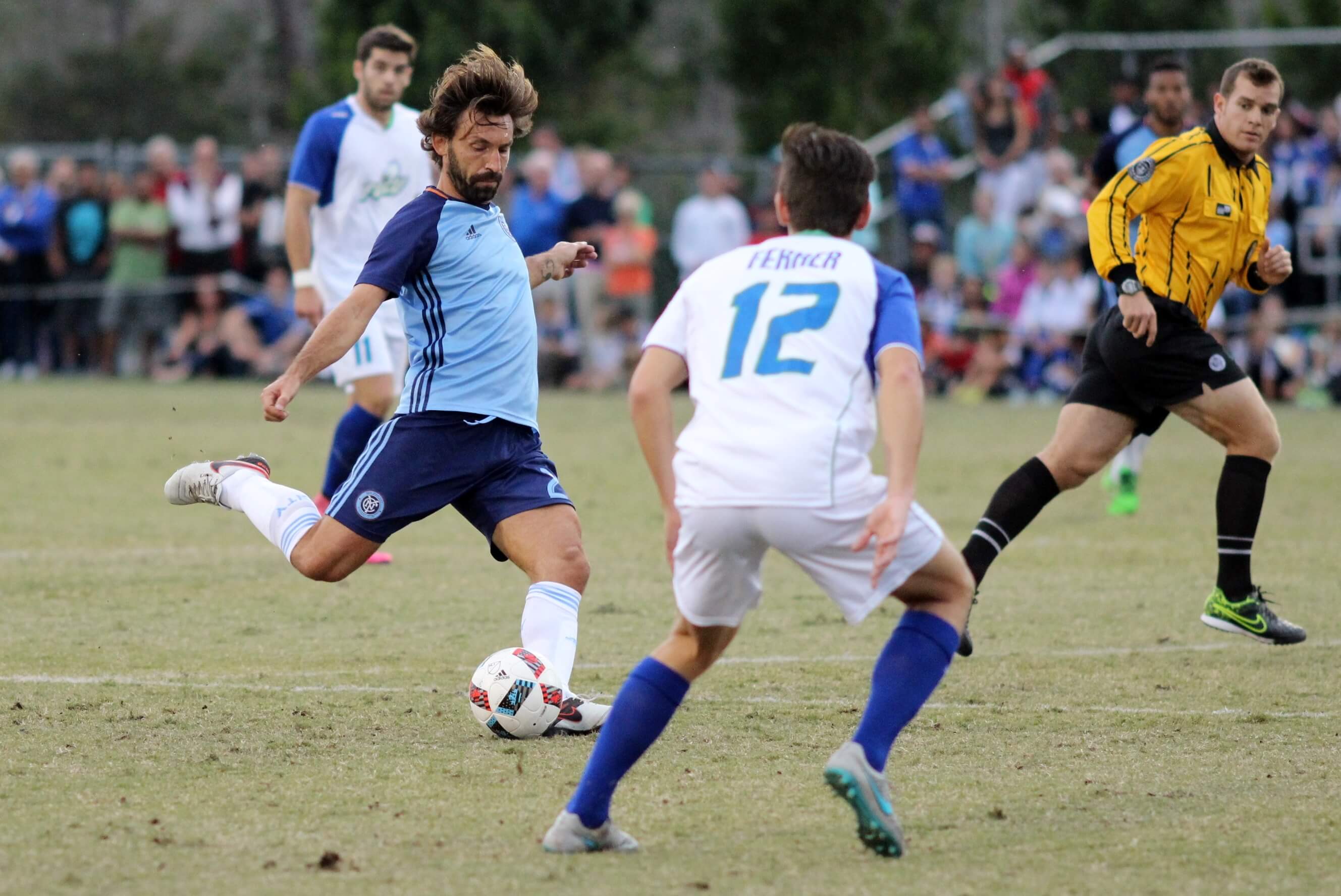 In front of an FGCU Soccer Complex record 3,042 fans, New York City FC faced off against FGCU for its first game of the preseason. After spending 11 days kicking off its preseason training at FGCU, NYCFC came out on top in its first game under new coach Patrick Vieira with a 1-0 win against the Eagles.

All 3,042 fans young and old witnessed an entertaining contest between FGCU and NYCFC, highlighted by three of the most decorated soccer players in the world David Villa, Andrea Pirlo and Frank Lampard, who have won a combined 47 trophies playing in Europe.

It was a fast-paced, back-and-forth affair in the opening 40 minutes of the contest.

In the 19 minute, NYCFC captain Villa found himself one on one with Sawyer Jackman, but Jackman met Villa’s volley to make the save and keep the match scoreless. Five minutes later, Villa had another attempt to put his team on top, but his shot was once again met by the hands of Jackman. Jackman punched the ball out where the ball was met by Kwadwo Poku who had a shot at goal denied by the post sending the ball out of bounds and keeping the match scoreless.

Both teams would exchange looks at goal. At the end of the first half, the score remained deadlocked at 0-0.

“He (Jackman) was phenomenal tonight,” said Nicolas Samayoa, regarding his goalkeeper’s performance. “It was great for him to play against them and save a couple of goals.”

In a second half that featured no Pirlo, Lampard, Villa and a lot of substitutes from both teams, the game was still close besides the new faces on the pitch for both sides.

Eight minutes into the second half, Albert Ruiz charged into the NYCFC box and fired a shot on goal, but his strike was met by the post and sent out of bounds.

In the 55 minute of the second half, NYCFC trial player Ernest Agyiri struck a ball that was played in by a teammate with a one touch volley, but his shot hit the ground later meeting the top of the crossbar and keeping the score 0-0.

Seven minutes later, Agyiri fired another volley at the FGCU goal, but his shot was met by Jackman. In the 66 minute, NYCFC would find the back of the net when Tony Taylor crossed a ball over the head of Jackman and met the left foot of Patrick Mullins putting NYCFC up 1-0.

NYCFC would control most of the tempo in last 14 minutes of the match, having two more efforts at goal met by Jackman. At the end of the exciting 80 minutes, NYCFC defeated FGCU 1-0.

“It was a great game, and it was exactly what I wanted,” NYCFC coach Patrick Vieira said. “The intensity was high, and we maintained our intensity from the beginning of preseason to this game. We played against a team that deserves a lot of credit because they played well. They played very aggressive they played the game to win, and they put us under pressure, and we had to deal with it.

After raining heavily during much of their stay, the FGCU grounds crew did a great job keeping the field prepared for NYCFC to train and prepare for its game against Eagles and its upcoming MLS season.

We enjoyed our stay, the pitch and the facilities here were fantastic for us, and we would definitely like to return.” Vieira said.

The 3,042 spectators that sold out the FGCU soccer complex are the most fans to attend an event at the soccer complex in the history of FGCU. The last time FGCU saw a crowd almost the same size of this weekend’s was when women’s soccer team hosted Auburn in the NCAA tournament in 2014.

“The fan support was awesome,” FGCU coach Bob Butehornsaid. “For me to look around and see the complex packed, it was incredible. We had to start turning away people because we didn’t have room and to me that incredible and hopefully it helps continue to build our fan base. Hopefully we can have them back next year.

FGCU men’s soccer team will play its first home game of the 2016 season on Aug.29 when it hosts Michigan.

“I’m really proud of the composure of the guys,” Butehorn said. ”They came out and they put it together.I didn’t even talk tactics to the boys before the game I just told them to stick to our style of play and we stayed true to our style of play didn’t change to their game and we were able to create some chances.”