For a second consecutive week, the ASUN Player of the Week was awarded to Felipe Ramirez following Felipe Escobar’s selection last week. 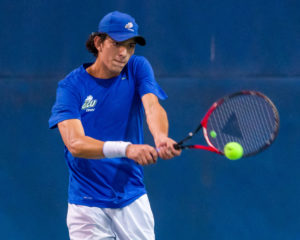 This is the first time Ramirez has been selected to this award, but was a part of the ASUN All Conference Team last season. He currently plays No. 1 singles and doubles for the Eagles.

He dropped his first singles and doubles match against Florida State, but followed that up with a 6-4 win in doubles with his partner Oliver Landert.

He then won a three set match 6-4, 0-6, 6-2 to bring FGCU level at two apiece with ETSU. His win came against ETSU’s top player, Robert Herrera, who had only lost one match at No. 1 singles last season.

Despite the team’s losses in its first four dual matches of the season, Ramirez continues his strong play from last season where he picked up 11 wins as a freshman.

So far through the fall season of 2017 and the start of 2018, Ramirez leads FGCU with eight total victories.

The reigning ASUN tournament champions will make its home debut on Feb. 3 against Georgia Southern as FGCU looks to pick up its first win of the season.