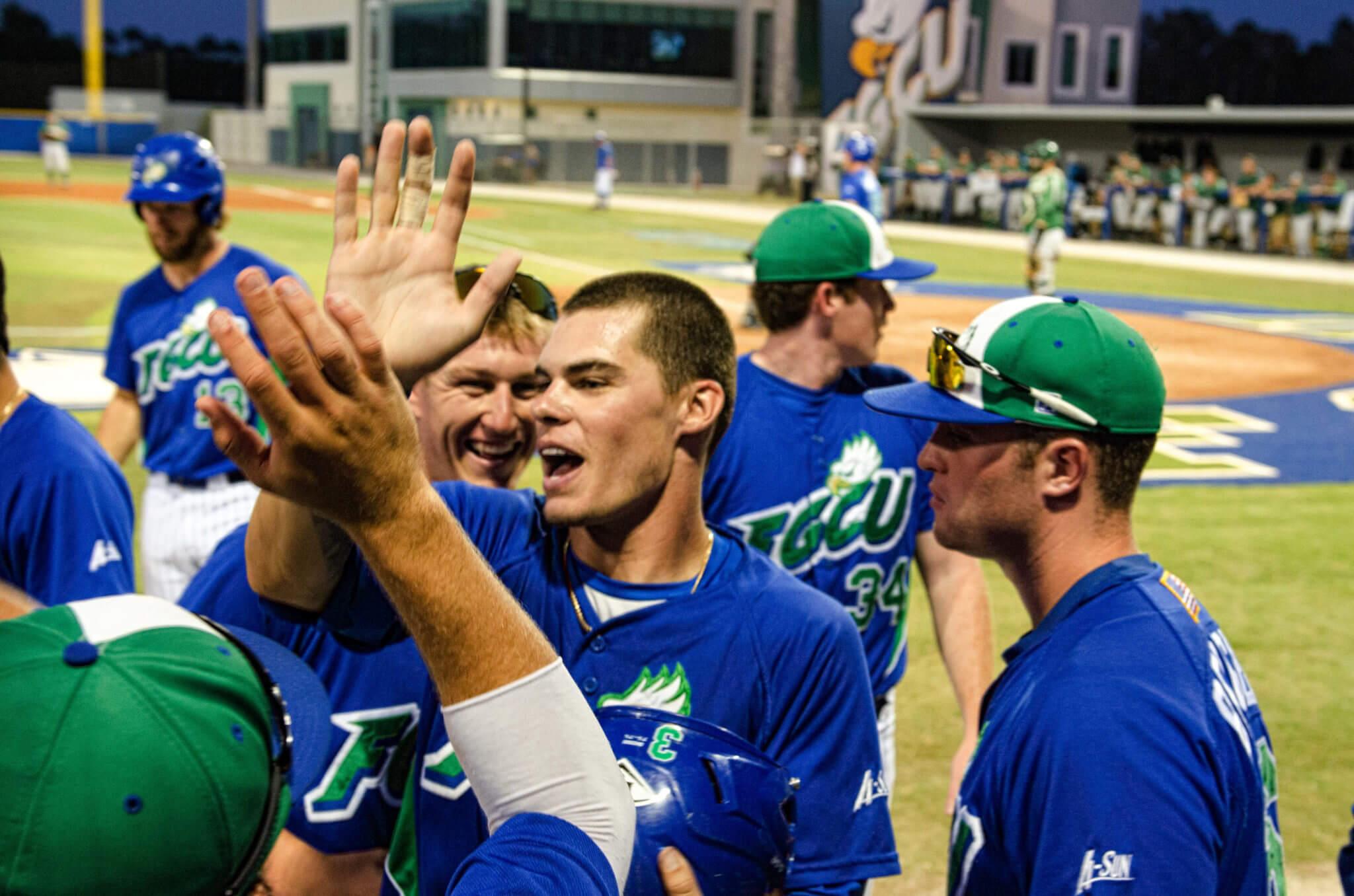 Jack English pitches during the Eagles’ elimination game against Jacksonville. English pitched a complete, nearly perfect game for FGCU to give the Eagles a 3-0 win. Tessa Mortensen / Eagle News.

The Eagles will face Lipscomb on Saturday May 24 at 1:15 p.m. The biggest story of the evening was the magnificent play by FGCU pitcher Jack English with his complete-game shutout.

“Jack English’s performance was one of the best we’ve had when we needed to have it,” said head coach Dave Tollett. “He earned a complete-game shutout. Because we’re in the loser bracket, we couldn’t have drawn it up any better for us. It was an outstanding performance in a time when this team needed that. We didn’t need to use four or five guys having to play a double-header tomorrow.”

English didn’t allow a hit until the seventh inning. He pitched himself into and out of tight situations throughout the game. His only two hits allowed during the evening both careened off FGCU defenders. He did run into some trouble with a walk and two hit batters during the first two innings. Then again in the fourth with two consecutive walks. But after 136 pitches, including 85 strikes, English finished his first career complete game with the shutout.

“We have all of our bullpen. We didn’t use any of our guys today,” English said. “Everyone has to come back ready to win, and we’re ready to do that. We have to stay relaxed, and keep doing what we’ve been doing. We need to stay focused, and be mentally prepared to play a double-header.”

Michael Suchy came into a sticky situation during the first inning with two outs already on the board. He sent a single up the middle, and Rivera finished the play driving Suchy home off a 0-1 offering up the right-center gap. FGCU took the lead 1-0. The Eagles played smart defensively throughout the game with the next opportunity coming during the fifth inning.

A-Sun Freshman of the Year Jake Noll was on deck when Alex Diaz was walked. Noll came to the plate and doubled earning himself a RBI as Diaz crossed the plate for the second run of the game.

During the sixth, Gage Morey knocked a long single into the middle. Zack Tillery stalled coming around third base, but the throw was up the line, giving Tillery the chance to tally the third run.

“We need to come out tomorrow and play consistent. I think the pressure is off of us right now,” Tollett said. “I don’t think Lipscomb wants to go into the loser bracket and have to play a must-win. We got our must-win game out of the way here. If we win game one, we have to turn around and do it again in five hours. I know that tonight we were pretty hung over. We were still feeling sorry for ourselves. We’re just playing one game at a time and trying to get to Sunday. I’ve got a lot of respect for those guys in the clubhouse.”

Saturday’s game against Lipscomb can lead to a double-header. If FGCU defeats Lipscomb they will meet again at either 5 p.m. or 8:15 p.m. Kennesaw State will face Stetson at 10 a.m., and a win from KSU will result in a 5 p.m. game for FGCU. However, with a win from Stetson, the Hatters will play KSU again pushing the Eagles’ game back to 8:15 p.m.