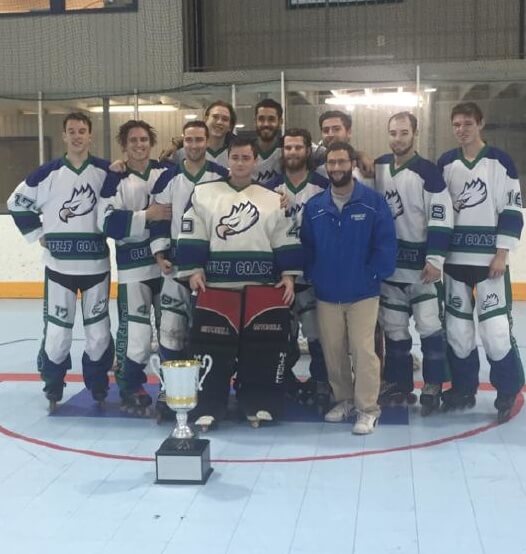 This hope comes at around a $20,000 cost. With a budget to pay for traveling, practice time and league fees, the club has to look beyond the school in order to have sufficient funds.

The previous treasurer of the club and now president, senior Danny Hill, says the team costs add up quickly.

“We do a lot of fundraising in order to afford to pay for practice time twice a week at the Skatium in downtown Fort Myers,” Hill said. “Our two main fundraisers are selling t-shirts and selling tickets to Everblades games and having a portion of the proceeds go back to the club.”

In order to come out on top, both teams, Division I and III, have put in year-round practice time to stay in the best possible shape come season time.
Both put in that extra work, whether that’s joining local recreational leagues or even just getting together to play in a few tournaments throughout the year.

“Both D1 and D3 teams play year-round but not as much over the summer, just to keep from getting rusty,” Hill said. “All of our players have played before college, yet D1 players usually have played longer than D3 players.”

Besides having to worry about funding the trip to nationals, the club has also had to put in a lot of work in the rink throughout the entire season.
Since nationals takes the best team from each region, the club is going to College Nationals in Cedar Rapids, Iowa, to play teams it’s never seen before. The teams qualified for nationals after earning first place in the regional tournament in Atlanta.

“The United States is separated into different divisions, we play in the southeast region,” Hill said. “D1 has four teams, FGCU, UCF, Kennesaw State University, and Virginia Tech, while D3 has three, FGCU, UCF, and Virginia Tech. But, our biggest rival is UCF; we play them so much because they are so close, and it gets heated sometimes.”

Once getting to Cedar Rapids Ice Arena, the best teams from each region play to determine which is the best team in the nation.

The nerves of nationals does not faze the team, as both the D1 and D3 teams have gone to nationals for the past three years. The club has been active for five years and usually finishes in at least the top 10 of the teams.

Obviously not a stranger to the national championship, the 25 men in the roller hockey club are going into the weeklong tournament looking strong, in hopes of stealing the title this year. Yet, this road to nationals has not come at a small price and will continue until at least April 10.