FGCU debuts beer garden for students at event, sells out in one hour 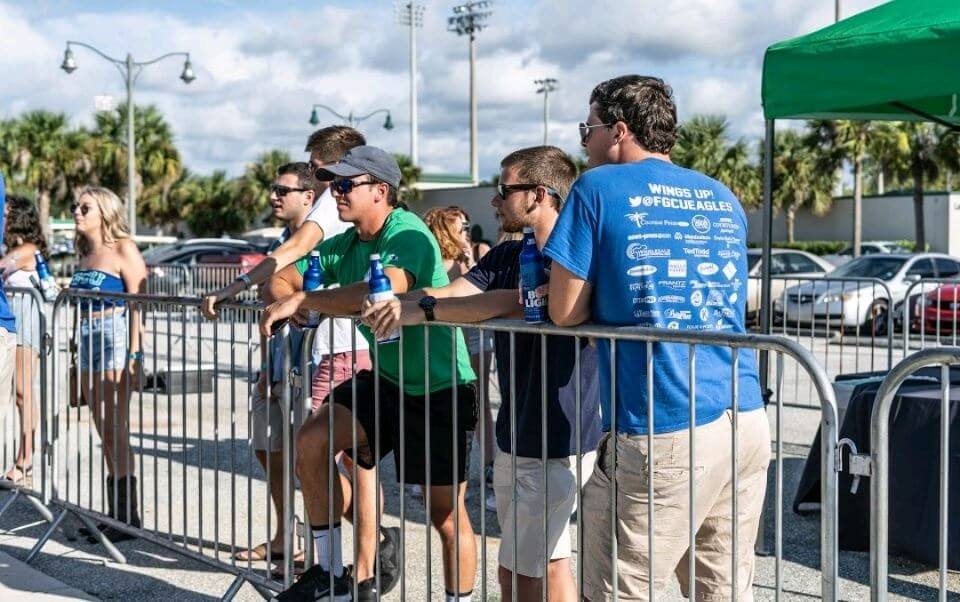 EN Photo by Bret Munson // Students and alumni had an opportunity to tailgate and mingle before the game.

FGCU’s first rally of the season, Rally at the ROC, “rocked” the university, and sold out of alcohol in just one hour, according to Student Body President Jalisa White.

For the first time in FGCU history, students could purchase alcohol at a university event, sparking excitement—and strong words of approval—among students.

Although confined to the limits of the guard rails surrounding the garden, students of legal age, with a valid ID card, could purchase beer and wine provided by Chartwells.

Alcohol has been sold in the past for alumni associations, but the selling of alcohol to students is unprecedented, according to Student Government Director of Student Relations Kayla Reiter.

Rally at the ROC, an event hosted by Student Government in conjunction with FGCU Campus Dining, the Student Alumni Association, the FGCU Bookstore and FGCU Dirty birds, FGCU Athletics and other departments, aimed to bring students together and celebrate before the men’s soccer against the University of South Florida.

Here’s a look at what students were saying:

“I like it. I wish they did this more often, but I feel kind of like, almost imprisoned with these [guard rails] maybe if they like, put the rails around the entire event instead. I feel like we’re kind of stuck here. Other than that, it’s actually pretty nice.”

“I think it’s a great idea. I think they’re doing it for the first time pretty well. It’s only up from here so, can’t complain.”

“Like, they can serve beer at a college event, a tailgate. It looks like a fun event. There’s a huge turnout that I haven’t seen in any sports event in a long time.”

“We think it’s super exciting. It’s been five years and we’re finally allowed to have a beer on campus. It seems like something that should’ve happened a while ago, but now that we’re 22, now that we can drink and stuff, it’s just exciting and it seems like everybody is having a good time.”

“I think it’s cool because I think a lot of the reasons that some people might not come here is because it’s a dry campus, but, since it’s not anymore, it caters to a lot of people, especially older people (21 and older) who might want to come here and have a little bit more fun. So, I think it’s cool that we can be on campus and be safe and still be drinking.”

“It’s amazing. I’m happy you’re interviewing me because I waited a long time to do this. I feel like everyone should be able to drink beer like a normal college as long as people don’t abuse the privilege. It just kind of sucks that we’re confined to an area and we can’t roam freely throughout the campus, but baby steps. It’s a step in the right direction.”