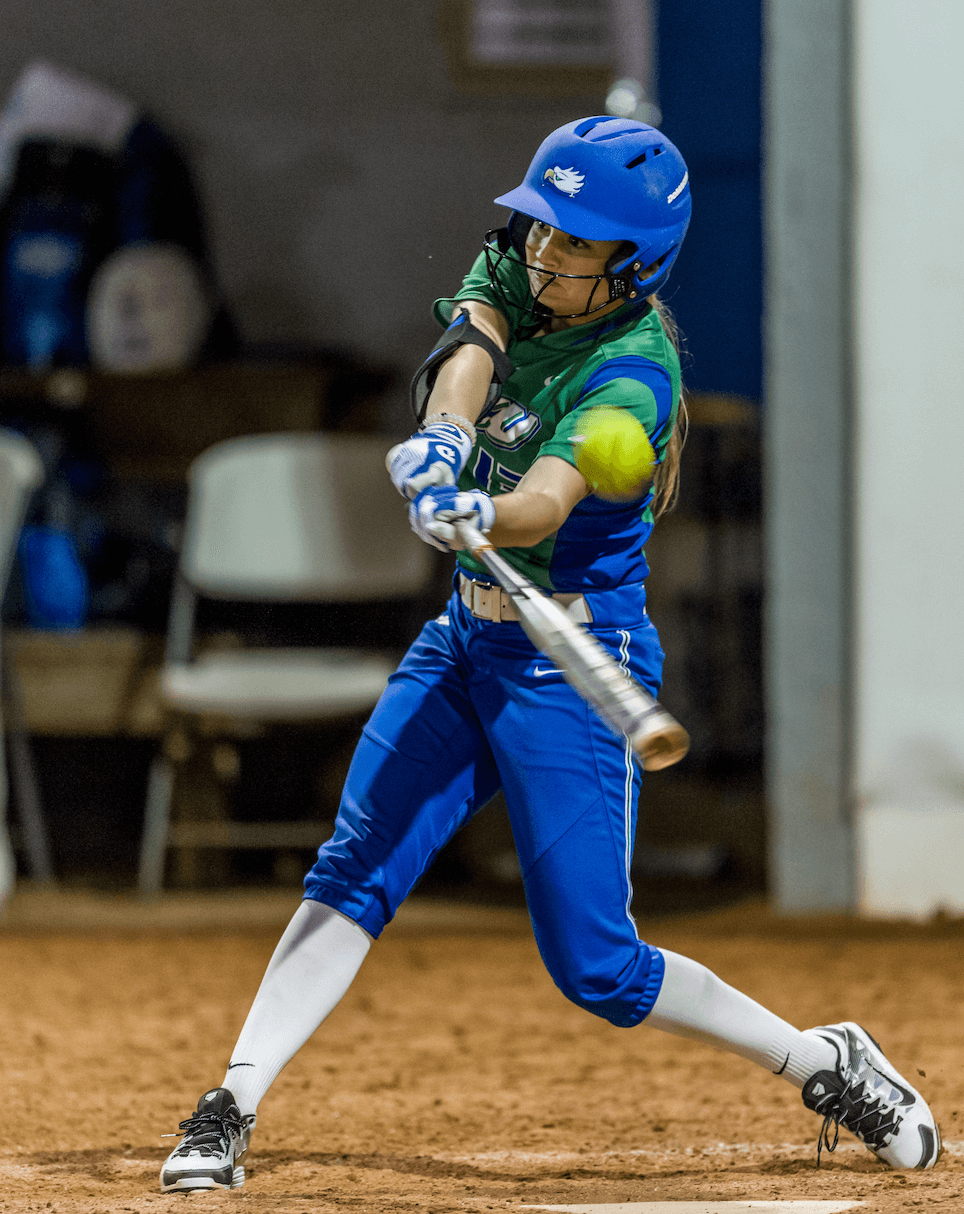 Racquel Fournet at bat in a 2016 home game against Hofstra. (Photo by Linwood Ferguson)

The 2012 Tyga hit “Rack City” blares through the speakers as the next batter steps into the batter’s box. The pitcher winds up and releases the ball, sending it over the plate. The batter connects, sending it back, way back. It’s a homerun.

Racquel Fournet, a freshman out of Windermere, Florida, is a first baseman and outfielder for the FGCU softball team, and she’s leaving her mark in the clay.

Fournet, who is one of three freshmen on a 21-player roster, is the only freshman to earn a homerun and leads the team with six of her own. She holds a .375 batting average, with 42 total hits and 35 RBIs.

FGCU head coach David Derios said he has been impressed with Fournet’s performance this season.

“Every freshman we bring in, we bring in with the same idea that they are going to go in and compete for a starting job,” Derios said. “What Racquel has been able to do is really adjust well what she has from pitchers and being able to be put in pressure situations and perform at a high level. I think she is mature beyond her years. That’s why she is really calm in those situations. There’s not a lot of hesitation.”

Fournet credits her early success to the atmosphere of the team.

“Coming in, I felt really welcome by the teammates and the coaches,” Fournet said. “I think with the good environment, it helped me to perform very well. We feel very comfortable with each other, and that’s why I think we’ve been doing so well early on.”

Her coaches and teammates think highly of Fournet, as she’s adjusted to the life of a student athlete.

Racquel Fournet officially declares that she will be attending FGCU to play collegiate softball. (Photo special to Eagle News)

“Raq is a fun, hardworking teammate,” McAvoy said. “She is quiet at times, but I think it’s because she is a freshman and hasn’t broken out of her shell yet. She works hard for herself as well as for her team, and she puts her teammates before anything else.”

McAvoy’s faith in Fournet extends off the field. McAvoy says that Fournet’s leadership has been something the team can follow and trust.

“What makes her so effective at the plate is her ability to adjust to the pitchers we face,” McAvoy said. “If she is struggling, she listens to what coach says, what her teammates say and what she sees herself to overcome the difficult games. She is the kind of player that doesn’t want to let her team down, and this is what makes her so effective up to bat. She is only a freshman, so she has a bright future here at FGCU.”

Fournet is not new to dominating the field.

Senior shortstop Louie Ross has been a stand out on the team since her freshman year, earning a cumulative .301 batting average.

“Raq is definitely a team player,” Ross said. “She is always there to pick you up when you are down and is worried about everyone and not just herself. She is a big part of this team and is an all-around good person. Raq not only puts in hard work every day at practice but stays humble as a person and a player.”

Fournet’s success did not come easy, and those around her appreciate her hard work.

“I believe (her hard work) has paid off greatly for her by keeping a level head and knowing what her job is on this team and accomplishing any goals she may have,” Ross said. “Not to mention, she is a stellar hitter with consistency. Even when she does get down, she picks herself back up and gets at it the next at bat.”

On an academic level, Fournet balances her homeruns with her biology books, hoping to continue her education and enroll in a nearby medical institution.

The Eagles are 19-19 this season and have six series left until A-Sun Championship play beings in May.