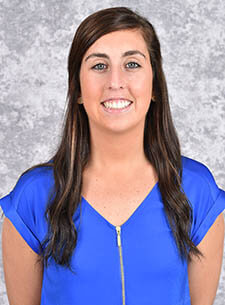 After finishing her four-year career as a player with the Eagles, Stephanie Haas took a position as video coordinator with the FGCU women’s basketball team for the 2016-17 season.

“After playing here for four years and learning and playing for coach Smesko, I was so excited to be able to be on the other side of it and learn more from him every single day,” Haas said.

As video coordinator, Haas oversees all aspects of film breakdown and video needs. She is also responsible for supplying the coaching staff with appropriate film for analysis and opponent scouting.

“I film all the practices and then we go and watch it and break it down in time to learn the system and mesh together as a team,” Haas said. “There’s definitely a lot of potential, there’s a lot of good players so I’m excited to see what they can do.”

Fresh out of school, Haas can also provide support and leadership to the young team as she was an impactful player on and off the court during her four-year stint with the Eagles.

As a senior in 2015-16, Haas earned a position on the DI-AAA Scholar Athlete Team for the second straight year and was awarded one of two postgraduate scholarships.

Haas was also named ASUN Scholar Athlete of the Year for the second consecutive year for her achievements in the classroom.

“I think the biggest thing they should know is that it’s not always going to be easy. From my stand point, I was a walk-on, then I earned a scholarship, so even for the young players who aren’t where they want to be, who aren’t going to play as much as they want at the very beginning, to keep working and their hard work will pay off,” Haas said.