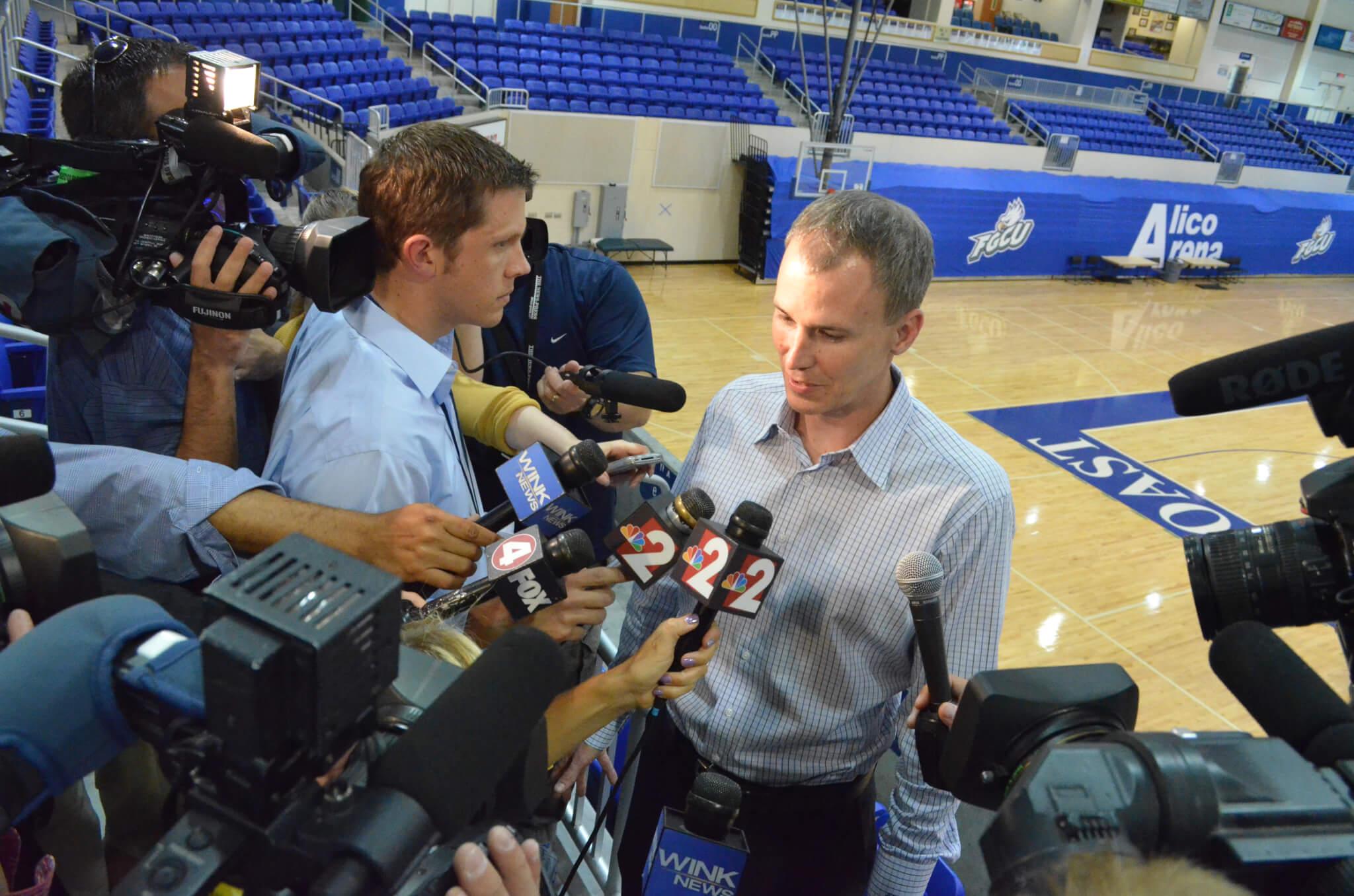 Andy Enfield keeps his eyes low as a bouquet of news cameras and microphones surround him.

His obvious exhaustion is both physical and mental.

He has just made one of the most difficult decisions of his life.

On Monday evening, University of Southern California tweeted that Enfield would be leaving Florida Gulf Coast University to become the head coach of the Trojan’s men’s basketball team.

The announcement came three days after FGCU lost to the University of Florida in the NCAA tournament.

“It’s bittersweet for me because what we did at FGCU is so special for the University and for the community,” Enfield said. “It’s extremely sad for me to leave these players.”

“We wish him and his family the best,” Bradshaw said.

Kavanagh said his phone began ringing off the hook only one minute after the tweet from USC.

While Kavanagh said he had hoped he would not be in the position to hire a new coach, he explained the overwhelming response is not a bad problem to have.

At the conference, Bradshaw and Kavanagh announced that assistant coach Marty Richter would become the interim head coach at FGCU until a permanent replacement is chosen. Director of Basketball Operations Joey Cantons will take over Richter’s position as assistant coach, leaving no staff position unattended.

Both Bradshaw and Kavanagh maintain that the history-making achievements this season were not luck. This is a program that has been built up over time.

“A head coach is only as good as his assistant coaches,” Enfield said. “They’ve done an unbelievable job, I can’t speak highly enough of them. I have a few guys on my staff who are ready to be head coaches.”

Despite the praise, Enfield will not be taking his staff to California.

While some speculate that Enfield made his decision to leave FGCU due to the reported million-dollar salary USC has offered, the coach maintains that was not the winning factor.

“I didn’t take this job just because of the money. USC is one of the greatest places in the United States to go to school,” Enfield said. “It has an unbelievable campus and atmosphere. The athletics program is as good as it gets. It’s an opportunity, not about money.”

Enfield describes the head coaching positions at both FGCU and USC as a “dream job.”

“My idea of a dream job is where you can be happy and want to show up everyday and work and make it a better place than it was the day before,” Enfield said.

The only damper to Enfield’s California dream is leaving his players behind. In a private locker room meeting late Monday night, Enfield broke the news to the men’s basketball team.

“(I told my players) that I love them and that this one of the most difficult decisions I’ve ever made,” Enfield said. “My family, my wife…it’s just heartbreaking, but they understand that the opportunity it there, and they’re all supportive.”

Despite leaving, Enfield said he hopes the men on the team will stay with Dunk City. He said he believes in their chemistry and their potential to win 20 games next year, whether he is with the school or not.

Enfield remains supportive of the Eagles and the “special group of young men” he helped to cultivate.

“Personally, I’m very happy for him,” Brown said. “You’re not going to find too many coaches like coach Enfield. He’s a very special coach, and that’s why USC wanted him.”

As details of Enfield’s deal with USC are revealed, the location and time of Enfield’s meeting with USC athletic director Pat Haden has remained a mystery.

He explained that he waited until after FGCU’s season was over to begin talking to new schools.

“I was very focused on our team and what we were doing,” Enfield said, “I thought we would go to the Final Four, we came up a little bit short and then after that we started fielding calls.”

In spite of the “overwhelming” media frenzy following Enfield, his top concern is with his school, both present and future.

As the news cameras disperse, Enfield is whisked away.

He headed back to California on Tuesday evening to begin the next chapter of his coaching career.

As for his legacy at FGCU: the school will never forget what Andy Enfield did.