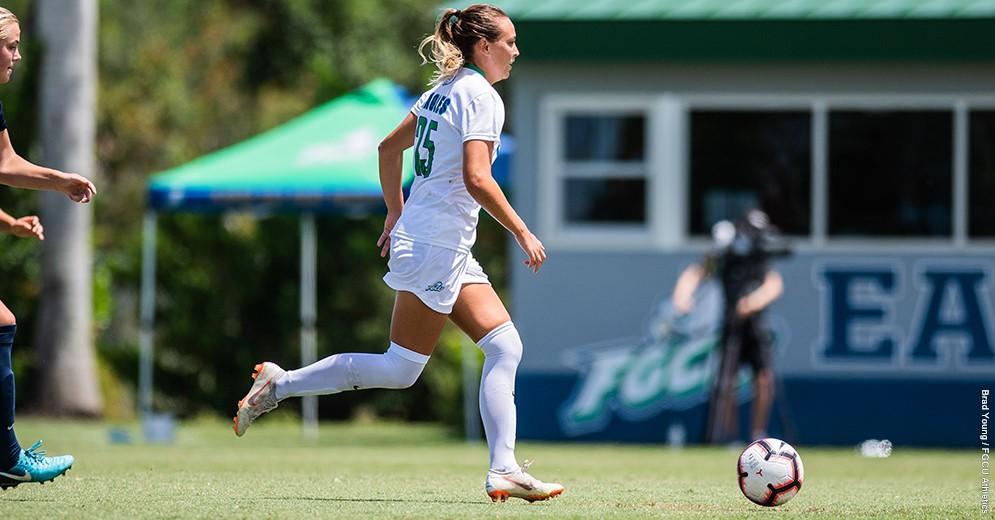 Photo Provided by FGCU Athletics // Marjorie Boilesen gave the Eagles their lone score as they tied 1-1 with Lipscomb on the road.

FGCU looked dangerous from the start with redshirt junior Megan Young tallying the first shot on goal in the third minute. The shot ultimately ended up going wide of the Lipscomb goalkeeper.

Senior forward Majorie Boilesen also put a shot up against Lipscomb in the eighth minute which was saved by Lipscomb’s keeper.

When the game started to teeter back and forth between both teams, Boilesen was able to convert a goal-scoring opportunity to give FGCU the lead in the 16th minute. This goal, which was assisted by Young, is Boilesen’s fifth goal so far this season.

The next twenty minutes of the half saw both teams having difficulty trying to create opportunities, with one more shot put up by each team.

Lipscomb scored an equalizing goal off of the back of a cross where the ball landed right at the feet of the awaiting Bisons player.

The half ended at 1-1 with only one more shot put up by the Eagles.

FGCU was able to register 11 shots in the second half compared to Lipscomb’s six shots, but none of the shots were able to find the back of the net.

In the two overtime periods, the Eagles teams were outshot by the Bisons 5-2.

This match ends the current road trip women’s soccer has been on, as the team returns home to play Jacksonville, Sunday, Oct. 6, at 1 p.m.