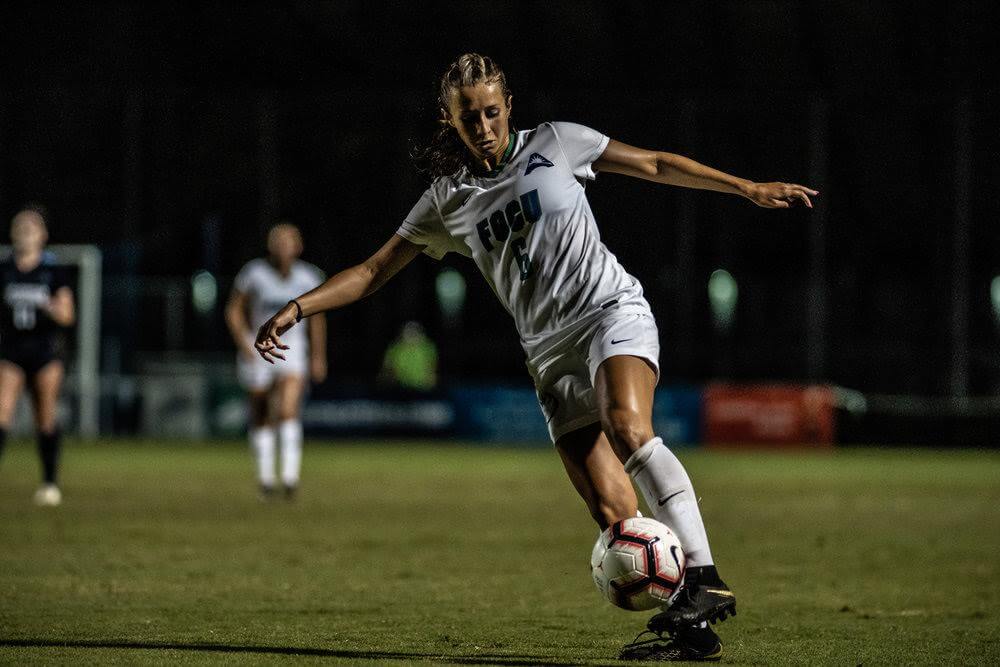 EN File Photo // Sophomore Cassidy Morgan kicks the ball during a game against Georgia Southern earlier in the season.

FGCU’s women’s soccer team beat their third Power 5 school of the 2018 season in a big win against Ohio State University last night, marking the first 5-0-0 start to a season in program history.

The only goal of the game was scored by Eagles’ junior Evdokia Popadinova in the 12th minute, who found the bottom right corner of the net off an assist from senior Holly Fritz, marking Popadinova’s fifth straight game scoring a goal. Only eight Eagles have achieved this feat.

The game itself was extremely low-scoring, with Popadinova being the only player on either team to find the net. The six saves by junior goalkeeper Melissa Weck certainly helped keep the Buckeyes off the board, despite FGCU being outshot 9-3 by OSU at the half.

At the beginning of the second half, the Buckeyes pushed offense and found two additional shots on goal, Weck saving both shots.

The Eagles found another shot at the net 15 minutes into the second half when Fritz made a run at the net, but a save by OSU goalkeeper Devon Kerr kept the score 1-0.

The remainder of the game was fairly defense heavy on FGCU’s part in their attempt to keep OSU off the scoreboard. The Buckeyes mainly held position but lacked the ability to get the ball further than the Eagles’ defensive line.

Statistically, the game favored the Buckeyes. OSU had 16 shots as opposed to just 6 by FGCU, six of those being shots on goal for the Buckeyes and only two for the Eagles. Ohio State was also award 10 corner kicks, eight more than FGCU’s two corner kicks.

“I am just so impressed with all of our kids,” head coach Jim Blankenship said.  “At the half we went with a ‘bend don’t break’ mentality, switching to more of a 4-5-1 and we did a great job of adjusting and sticking with the plan.  Weck and the back end were phenomenal as usual. It was great to just continue building on what we have done so far. We have continued to get better every week.”

Next up, FGCU will travel to Dayton, Ohio to face off the Dayton University Flyers on Sunday, September 9 at at 1 pm.