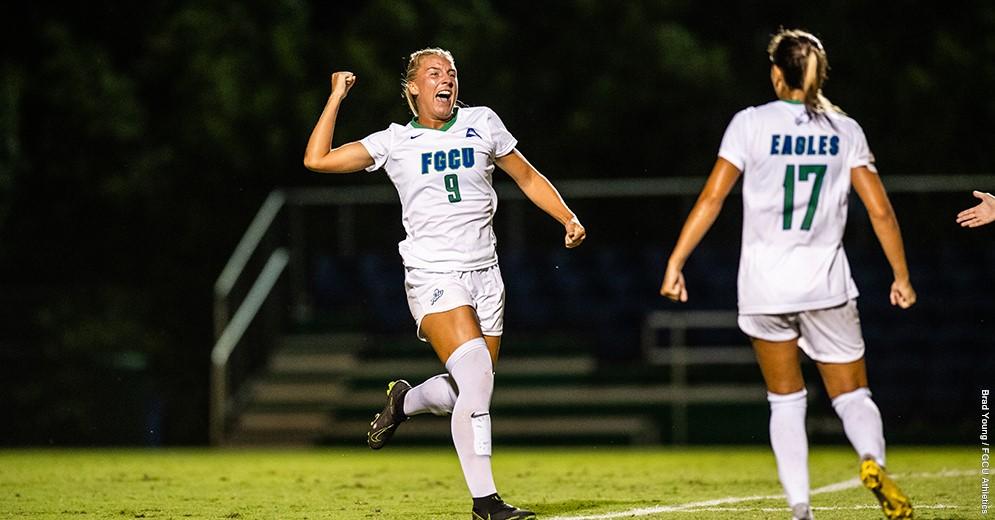 Photo Provided by FGCU Athletics // Women's soccer defeated North Alabama 3-1 on the road to open up their slate of ASUN conference play.

The FGCU women’s soccer team (6-3) beat the University of North Alabama Thursday night by a score of 3-1 to secure its first Atlantic Sun Conference win of the season.

The game got off to a cracking start with FGCU having the first goal-scoring opportunity off of a chance from senior forward Evdokia Popadinova that skipped right into the hands of the awaiting UNA goalkeeper in the 4th minute.

The Eagles peppered the UNA defense for the rest of the first half, putting up five more shots that ultimately didn’t find the back of the net.

UNA recorded three shots of their own in the first half, all of which ended going wide of the FGCU goal.

Even with the combined eight shots by both teams, the score remained level at 0-0 at halftime.

Redshirt junior Megan Young put up FGCU’s first shot of the second half but was not able to beat the Lions goalkeeper.

The stalemate was finally broken with a goal for FGCU from freshman forward Louise Lillback in the 52nd minute off of a cross from Young.

Popadinova then was able to capitalize off of loose defense by UNA and let a shot rip from long distance, which found the top corner of the net just two minutes later in the 54th minute, scoring her fifth goal of the season and pushing the Eagles lead to 2-0.

North Alabama was able to pull one back off of a goal from Shelby Wall, which increased her goal tally to 10 for the season.

Lillback scored her second goal of the night where she slotted her shot past the keeper in a one-on-one situation to seal off the game in the 66th minute.

Women’s soccer continues their road trip with a face-off against Lipscomb University, for first place in the ASUN Conference, on Sunday at 2 p.m.