James Franco and Kalup Linzy’s art exhibit might make you question your sanity, but in a cool way

James Franco and Kalup Linzy are either totally creative or totally crazy — maybe both. Either way, their art exhibition at Florida Southwestern College in Fort Myers was as entertaining as it was confusing.

The exhibit, which opened in the Rauschenberg Gallery on Friday, April 7, featured bright orange walls covered in screens with big puffy black headphones hanging next to them.

Upon first glance, you notice the huge compilation of thick black lines and photos climbing up the wall to form a family tree.

I’d love to tell you what this represents, however it was only the beginning of an artistic experience that was mostly soaring beautifully over my head. 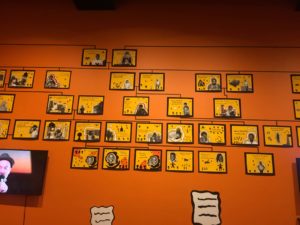 Each TV in the gallery played a different mini-movie starring either Franco or Linzy, recorded on what appeared to be a camera one of them found in their great grandma’s basement.

The horrible video quality, which I’m assuming was intentional, is only overshadowed by the strange acting and plots which were hard to follow at best and utterly absurd at… also best.

My friend and I circled the room, pretending to be art aficionados while feeling like we just stepped onto an artsy alien planet.

After watching some of the strange videos, we walked past the black curtain, fascinated and slightly afraid of what we’d find.

Set up inside was a viewing room theatre with a short film Linzy and Franco made playing on a loop.

I’m still not sure if this was the product of some weird fever dream or what we actually experience that day, but this is basically what the movie consisted of.

Franco and Linzy played two women desperate for fame and stardom, trying not to let their past lovers get in the way of them “crossing over” into the realm of real artists and actors.

Most of the film, which was split into 10 parts, took place on a couch, with a big blue and yellow painting in the background that I can only imagine either cost thousands of dollars or was purchased at a consignment store where the outfits and wigs were likely picked up as well.

Franco wore a blonde flippy wig and red lipstick that really brought out his moustache and Linzy wore a sleek red wig, with each of their big hands adorned with long acrylic nails.

Franco also took on the role of another character, Linzy’s character’s boyfriend, in which he wasn’t dressed in drag.

This role featured him mouthing the lines with a deep, strange-sounding voice talking over them, an artistic move that I’m sure symbolized something.

When he breaks Linzy’s character’s heart, it causes her to really breathe life into her monologues, which Franco’s character is turning into a film, later to be screened at an art gallery, unbeknownst to Linzy’s character.

Though the film must have been out of reach for the non-artistic brain, what I gathered from my viewing was that Franco and Linzy were making a statement about reaching past emotional boundaries for the sake of creating art that is more legitimate, something that both the characters and the actors themselves were doing by partaking in their projects.

If you want to see what happens when a handsome Hollywood star and a talented New York performance artist meet up to dress in drag and shout monologues into a low-budget camera — and be honest with yourself, you know that you do — head over to FSW for an artistic experience you’ll never forget and wonder if you really just watched.