A new way to hang on campus 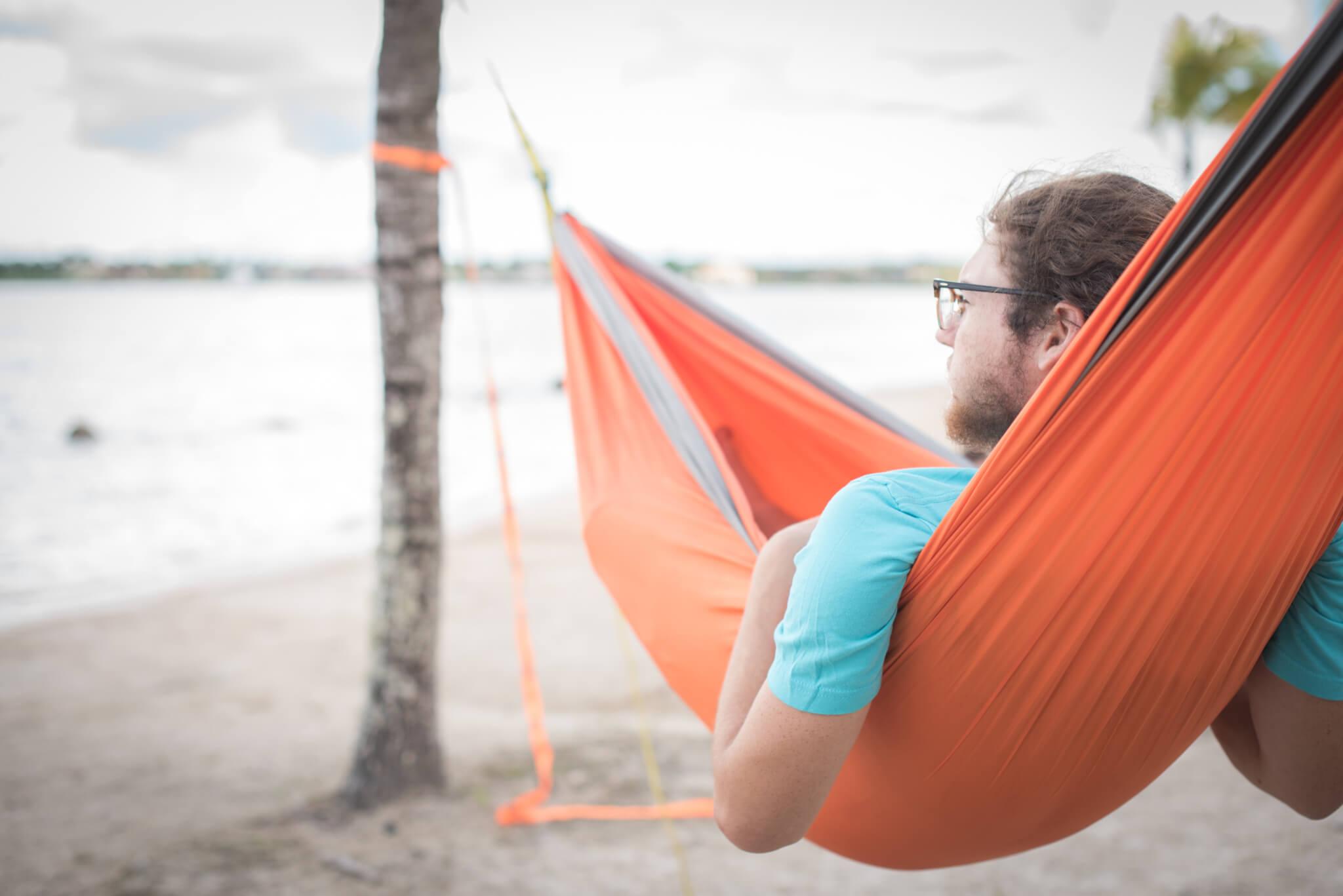 When you think of a hammock, you probably think of hanging under the shade of some palms at the beach with views of a crystal-clear ocean – the ultimate form of rest and relaxation.

Thanks to travel hammocks, that kind of rest and relaxation doesn’t have to be limited to the beach – it can happen anywhere.

On FGCU’s campus, The Hammock Club’s mission is to create an inclusive community of people who want to do just that: rest and relax, hang out – literally – and have an outlet to de-stress and meet people. FGCU’s administration hasn’t made it particularly easy this semester, though.

Cameron Kaseman, a sophomore double-majoring in accounting and finance, started the hammock club in February, 2016.

“My first semester of freshman year, I started to feel a lot of stress,” Kaseman said. “And I thought, ‘I wish I could just chill and relax in my hammock for a bit,’ and then I realized that I could.”

The Hammock Club had been hanging their hammocks around campus and would sometimes run into a situation where somebody had reserved the area where they were set up and they would have to move.

While they didn’t mind moving, Kaseman called campus reservations this semester to set up an official reservation for a meeting and it seems that’s where the problem began.

“I think we have a problem at the institution right now,” Win Everham, a professor of marine and ecological sciences, who has been at FGCU since 1996, said. “The knee-jerk reaction is, ‘no, because I don’t really understand what might be the negative implications of what you’re asking me, so I’m just gonna say no. And I’m not going to just say no – I’m going to say no because there’s a policy against it’ – people say this even when there aren’t policies.”

Kaseman was told that he would have to speak with the facilities planning department and student affairs because hammocks aren’t allowed on campus.

After reaching out to the different departments, speaking and emailing with different people, Kaseman got the green light from Julie Gleason, Assistant Dean of Students.

Everham remembered seeing signs around the newly renovated library lawn a couple years ago that said, “No hammocks.” Curious about the root of those signs, he got in touch with George Brown, FGCU’s landscaping and grounds superintendent.

“Two years ago, those trees out on the lawn were still babies,” Brown said. “Even now, I would still say that in ‘tree years,’ they’re in elementary school. They probably need two more growing seasons until they are OK to hang hammocks on. But I’m not anti-hammock – there are plenty of mature trees on campus and on the nature trails to hang on no problem.”

There has been one incident regarding tree usage, and that was at North Lake. At the beginning of 2016, The Slackline Club strapped a slackline to a dead tree in and pulled it out of the ground.

“Honestly, we are very cognizant of what trees are good to hook up to,” Evan Wenglarski, president of The Slackline Club and a senior majoring in criminal justice said. “It was an accident. I took full responsibility for it immediately and we haven’t had any trouble since.”

The Slackline Club uses felt pads that wrap 360 degrees around the tree to protect it and both clubs use eco-friendly wraps that are intended to be safe on trees, as opposed to ropes.

While Gleason has given Kaseman the go-ahead, there is still no official policy regarding what can and cannot be hung on campus trees, and how.

Ashton Hartley, FGCU’s coordinator for student organization and development, oversees all of the RSOs on campus. Any student who wants to create an RSO has to do so through Hartley. He approved The Hammock Club.

“To create a policy, it’s going to take several different departments to come together and dissect the situation,” Hartley said. “Students deserve to have answers and know what’s going on. I am a fan of this club – when I met Cameron in January, I remember how jazzed he was and I don’t think there’s a better person to lead it. Quote me – I am 100 percent  a fan.”

Having been given permission, The Hammock Club plans to continue meeting and has big plans for what the club could become.

“UF has a hammock club with over a thousand members, and they have a festival every year,” Kaseman said. “I want to bring that here. We would have music and food and other clubs would table. I got over 400 interested freshmen here over the summer – we want to make it happen.”

“How cool would that be?” Everham said. “Hammocks are a delightful engagement with our natural environment.”

Devon Jerothe, a junior majoring in software engineering, is the photographer of the club. He transferred to FGCU his sophomore year after attending the University of West Florida his freshman year.

“I like it because it’s a social club,” Jerothe said. “My main problem at UWF was that there was really no way to get involved – no way to go out and meet people – so, I think the hammock club is a great opportunity for people who don’t really know people and want to get involved.”

Evan Rudd, sophomore majoring in pre-nursing, is the treasurer of the club. He joined for the same reasons Jerothe did – to get involved and meet people.

“If you’re looking for friends, come hang out,” Rudd said.

The Hammock Club meets in conjunction with The Slackline Club on Sundays at North Lake on what they call “Slackline Sunday.”

Information about meetings can be found on The FGCU Hammock Club Facebook page.