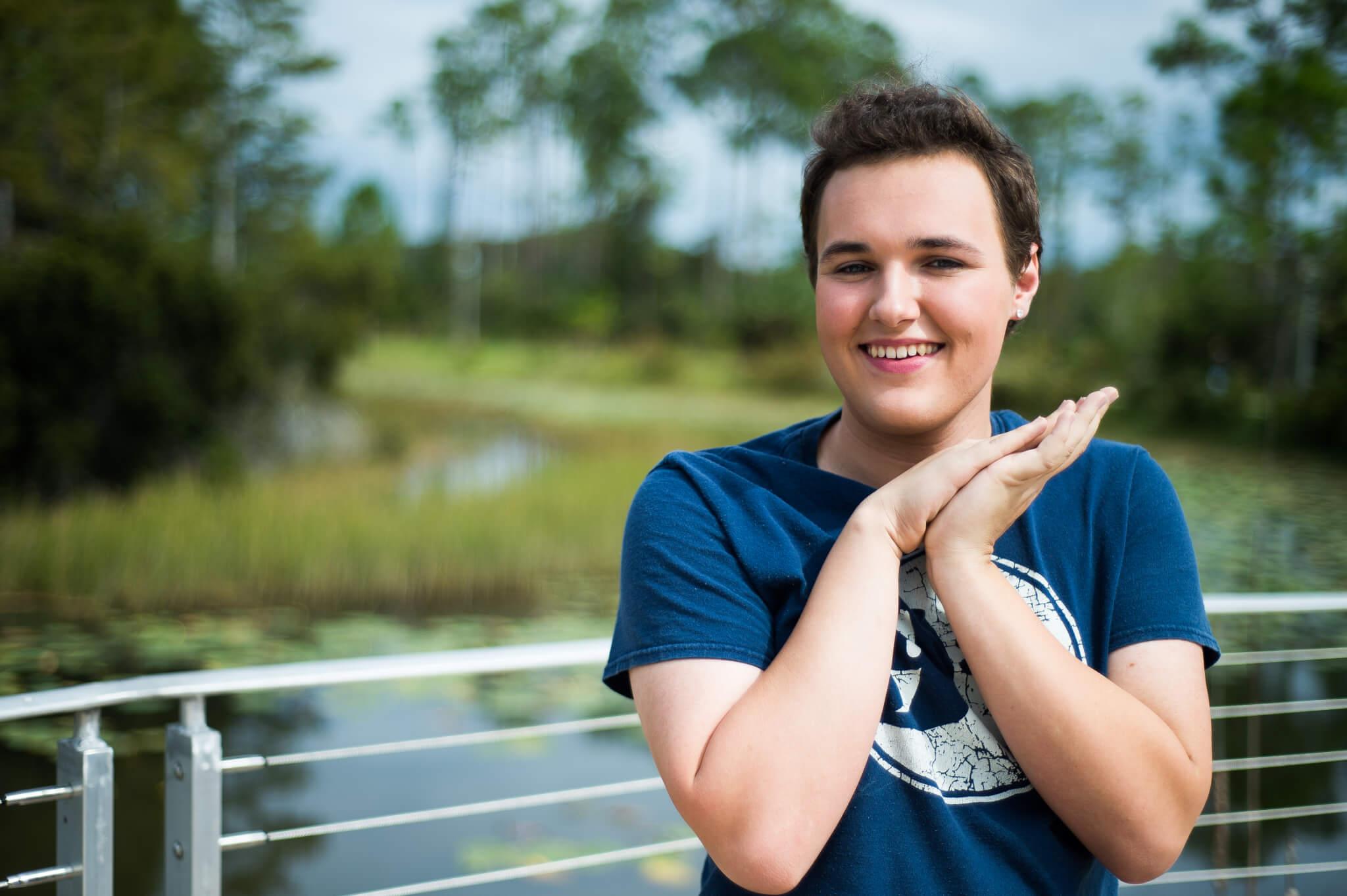 Belyea poses near a lake on campus. Belyea, who has been taking estrogen for almost six months, spent time couch surfing since she was kicked out after coming out to her parents as a trans woman on International Transgender Day of Visibility on March 31, 2016. (EN Photo / Brad Young)

Katherine Belyea stretches her hands out in front of her on the tabletop, rubbing her palms together absent-mindedly as she does whenever she’s uncomfortable. This time, she’s talking about her family, and well, last time, she was too.

She says she has a lesbian cousin her family came to accept. Her cousin’s girlfriend has even been accepted into the family.

But, the problem is, she’s not lesbian. Well, maybe, she is, but more than anything, Katherine Belyea is transgender — a trans woman whose family still calls Corbyn.

Belyea said her deadname — the name a trans person was assigned at birth — could be included, as people are often curious about a trans person’s beginnings.

Belyea, who is a junior at FGCU, was raised in a “very, very conservative” household and was sent to a private Christian school that adhered to every word of the Bible teaching its students that the story of creation means the Earth has only existed for 6,000 years.

Though she says it feels like it’s been three years, Belyea has been publicly out for six months, having come out on March 31, International Transgender Day of Visibility.

She said she initially started the journey to end the pain she was in and has encountered both more pain and incredible relief in the time since beginning her transition.

“The hardest part about communicating with my parents is, for me, it feels like it’s been a really, really long time, but for them, it was only six months ago,” Belyea said.

Five months ago, a day short of the month anniversary of her beginning estrogen, Belyea sat in the fishbowl outside the Dean of Students’ Office, a hall away from Counseling and Psychological Services, which aided her in forming a support system before her big day.

She held her arms tight to her chest for nearly an hour, as she shakily recalled the day she came out to her family.

Belyea had left a letter on her dad’s pillow when he was out drinking with friends. At a friend’s place the next morning, she woke up to multiple messages from her mom. Though they are divorced, Belyea’s dad had called her mother and told her the news.

Her mom wanted her to “be a man” and come out to her in person, so she drove to her mom and stepdad’s house.

“After I came out to my mom and stepdad, they said I had 30 minutes to go tell my grandma, who I was living with at the time, that I was moving out and tell her what had happened,” Belyea said.

For the next month, Belyea lived in her car or on friends’ couches, never staying more than a night in fear of being a burden.

“I was really mentally unstable after getting kicked out,” Belyea said. “Not having a place to call my own was really, really tough at times.”

Despite her openly discussing her thoughts of suicide in her coming out post on Facebook, when she spoke about her gender dysphoria in May, she denied having been suicidal. Now, though, she openly discusses her transition as “a matter of life and death.”

Despite being kicked out and misunderstood after coming out to her family, Belyea’s grandmother, Arlene Cabana still expresses her love for her. “My grandma was the first one to say, ‘Listen, no matter what, I’m going to be here for you,” Belyea said. (EN Photo / Rachel Iacovone)

“My mom and stepdad have called me a liar,” Belyea said. “They said, ‘If you had those feelings early on, you would’ve said something about them back then. You wouldn’t have come out now.’ And, not having my family was really hard because I was raised with family being the most important thing. Family means a lot to me.”

And, despite the disconnection, she means a lot to her family. One family member in particular made sure to remind Belyea she was loved during her coming out process.

“My grandma was the first one to say, ‘Listen, no matter what, I’m going to be here for you,’” Belyea said.

Arlene Cabana, or “Nana” as Belyea calls her, sat on the porch of her Fort Myers home a half a year away from her “grandson’s” initial announcement, wiping away tears as she talked about “him.”

“I knew Corbyn was different, but I thought it was the intelligence,” Cabana said. “I thought he was different because he’s so smart.”

Cabana said she thought Belyea was joking when she first told her but was shocked when she realized she wasn’t.

“What makes me angry with Corbyn is that he comes out and tells us he’s trans and he immediately wants us to accept it,” Cabana said. “He thinks that we should just accept what he says, and after 20 years, he wants us to call him a different name.”

Cabana explained that she doesn’t deadname Belyea maliciously, and she assured the rest of the family doesn’t either; it’s just what they’re used to.

“You just don’t do that overnight, and that’s what he seems to expect,” Cabana said. “He needs to give the family time.”

“Corbyn got up in front of the people and read from the Bible and said a prayer,” Cabana said. “And, he told me, ‘Nana, when I grow up, I’m going to be a preacher.’ I know children always change their mind, but you know, I think of that little boy then and him now and…”

Cabana’s two dogs ran in from the yard that her ex-son-in-law still landscapes to comfort their owner, who couldn’t bring herself to finish the thought.

“Things have been better with her than with my parents, but we still have our moments where she’ll look at me and just start crying,” Belyea said. 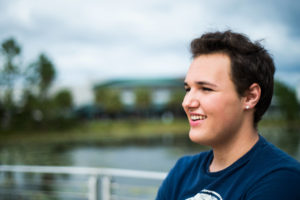 The feelings Cabana has about Belyea’s transition are more so rooted in fear for her grandchild than in her faith’s beliefs about LGBT individuals, Cabana said.

“I told him I’ll always love him, and I do,” Cabana said. “What I’m concerned with is his safety. The world maybe accepts it better than when I was younger, but not everyone accepts it.”

Efforts to contact Belyea’s father, who she now lives with, went unanswered. Her mother said she had no comment.

The understanding Belyea said her family initially lacked she found in her close circle of friends.

One such friend Silas Pacheco is a junior anthropology major at FGCU, but the two met in high school in a creative writing class. Nearly five years later on New Year’s Eve 2016, Pacheco became the first person Belyea came out to.

“I always sort of felt like there was something off,” Pacheco said. “She had a pretty guarded type of personality, and I could tell after some time she was clearly on the gender queer spectrum somewhere. There was just the question of what it was.”

Pacheco said he never pushed the matter though, assuming she would talk about it when she was ready, and eventually, she did. Their friendship remains almost entirely unfazed since.

He added that they had that in common.

Another friend was there the first time Belyea cut her hair after coming out.

Katherine Belyea fixes her hair in the women’s bathroom of Silverspot Cin- emas at Mercato in Naples. Belyea first cut her hair after coming out with a friend. “Long hair is like a staple of feminity, so I was having a crisis honestly outside the salon,” she said. (EN Photo / Rachel Iacovone)

“Long hair is like a staple of femininity, so I was having a crisis honestly outside the salon,” Belyea said.

Belyea called her friend, who drove over and took her to another salon. When Belyea couldn’t find the nerve to verbalize what haircut she wanted, it was her friend who spoke up for her.

“We just want her hair to look as lesbian-y as possible,” she told the stylist.

Belyea walked out that day with her signature pixie cut. Later, diamond studs and a more confident smile were added to her look.

Looking toward the future, Belyea said she now plans to eventually go through Sex Reassignment Surgery, which she was originally very cautious about. Not all trans people are comfortable discussing SRS, which is a very personal procedure.

“There have been times that I’ve been on dating sites, and the first thing they ask is like about my genitals,” Belyea said. “And, it’s just awkward.”

Belyea, who calls herself a “practical lesbian,” said she felt pressured to date men to fit in with cisgender women. Cisgender refers to those whose gender corresponds to the sex they were assigned at birth.

“Figuring out my sexuality I could not do before I figured out I was trans because so much of sexuality, for some reason, ties up in gender,” Belyea said. “When I first came out as trans, I was afraid to date girls because it made me feel like less of a woman.”

Hyper femininity is a reality many trans women face, regardless of sexual orientation.

“When you’re trans, so much is placed on how feminine — traditionally feminine — you are,” Belyea said.

She said her grandma once told her that she can’t be transgender since she likes comic books.

“You’re not allowed to exist on the more masculine end of the spectrum because then you’re not enough of a woman to be seen as a woman,” Belyea said. “For me, transitioning has been more about navigating the prejudices of what people think it means to be a woman.”