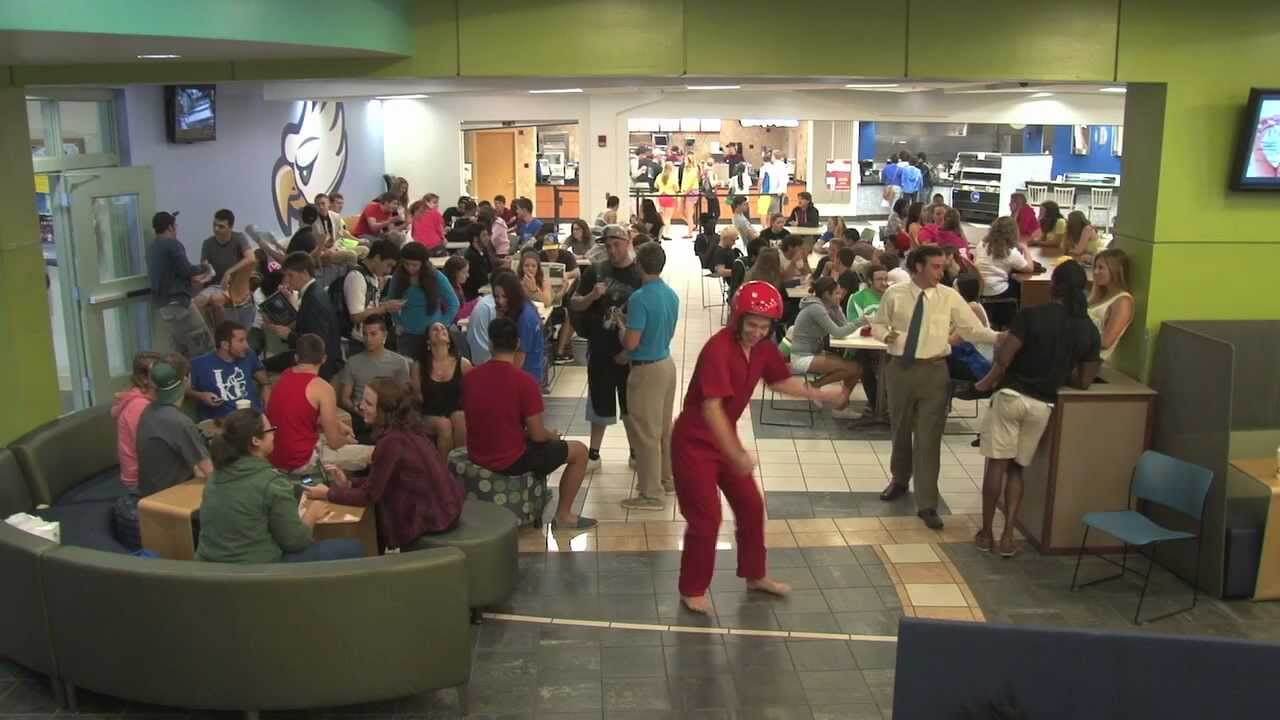 The cyber world tends to bring extreme viral crazes every few weeks that spread drastically and quickly. First, there were the flash mobs around the world. Then there was the famed “Gangnam Style.”

The latest is “The Harlem Shake” and a a group of Florida Gulf Coast University students took over the Cohen Center cafeteria to perform their version. Andy Grunskis, who is a sophomore student majoring in business marketing, brought the growing trend to FGCU and his results were overwhelming.

“I decided to do the Harlem shake at FGCU because, at the time, the video was a growing trend and I wanted our school to get noticed,” Grunskis said.

Grunskis has been making YouTube videos for over 10 years so it came as no surprise that he would be the one to organize such a huge event on campus. The point of the Harlem Shake is to get a single person in a room doing a dance for about 10 seconds until the beat of the song drops and the entire room switches into chaos. The craze has caused the song, performed by Baauer, move up the Billboard charts, which recently started using YouTube views as part of the rankings.

With some in horse outfits, some in banana costumes, and some even shirtless, the FGCU
students went wild in the cafeteria.

“I made a Harlem Shake video at my house first with about five people, and it had a great turnout and great reviews and some people mentioned doing one on campus, but nobody else would organize it so I took the initiative to arrange one,” Grunskis said

He knew that once the enthusiasm about the original video started to fade, the attention would be lost so the sooner he got the video out, the better.

“I thought it was really cool that a ton of people showed up that I didn’t even know that wanted to participate,” he said. “It exploded and even Azul the Eagle came.”

As of press time on Tuesday, Grunskis’ FGCU edition of the video had nearly 35,000 views on YouTube.

“We had the craziest people that wanted to be in it and I thought it was awesome,” Grunskis said. “I invited a couple of my friends and hundreds of people wanted to join that came from athletics, Greek life, and our mascot.”

Along with Grunskis, junior Ricardo Nugent, who is majoring in communications, wanted to jump in on the pandemonium.

“I thought this Harlem Shake video that Andy was making would be an amazing way to have a party without actually having a party,” Nugent said.

With a few unstable tables, unhappy administration, and confused staff, the Harlem Shake video was a huge success. “I was the one wearing crazy sunglasses, I was shirtless, and I had to put on my Santa hat,” Nugent laughed.

No matter what year or major students were, everybody was encouraged to participatein the outbreak.

Ansley Parish was another student who was ecstatic to lose control for this video.

“I chose to participate in the video because I wanted to be a part of something that I knew was going to get blown up ,and I thought it would be pretty cool to create some new memories in college,” said Parish, a freshman majoring in communications.

Now that the Harlem Shake has made its way into the viral YouTube world, schools all over the country are taking part in it as well. The official University of Florida version has nearly 500,000 views. The Army, Marines and even retirement homes have also made hilariously entertaining videos.