The clock read 2 p.m. when 8-year-old Una Bilic left the basement to meet her mother as she routinely did after school.

She walked until people began dropping to the floor screaming, “Snipers! The snipers are here! Run!”

Bilic knew her mother was waiting for her on the main street. It was 2 p.m. She always waited. Bilic’s friends pleaded in tears for her to return to the school basement, but she took off in search of her waiting mother.

Bodies crashed to the floor as she ran and the sound of sniper bullets thrashed through flesh and airwaves alike. Bilic was a running target until a man tackled her aggressively to the ground.

Bilic began to hysterically cry, to which the man whispered, “stay quiet or they’ll hear you.”

When the bullets ceased, the man got up and Bilic followed. It was in that moment that Bilic could identify which bodies dropped for protection and which dropped at the hands of the bullets.

Bilic shared her experience as a Bosnian refugee on Friday, March 31 in Edwards Hall room 112. The talk was presented by the International Services Office.

“When people ask me how the war was, I never know what to say,” Bilic said. “The sound of sniper bullets is the worst sound I’ve ever experienced. How can I describe that to people?” 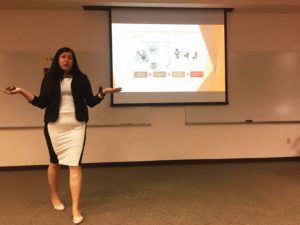 Una Bilic addresses a crowd in Edwards Hall room 112 on Friday, March 31 to dicuss her experience as a Bosnian refugee. Bilic shared her experience through the International Services Office by holding a talk that was open for everyone to attend. (EN Photo / Alexandra Figares)

The year was 1992 in Sarajevo, Bosnia and Herzegovina. A lethal civil war was brewing between Bosnia and what was formerly Yugoslavia.

Conflict erupted in Bosnia when the Serbian-dominant Yugoslav army opposed Bosnia’s quest for independence and waged war against the Bosnian people.

In 1992, the siege of Bosnia’s capital, Sarajevo, established what would be Yugoslavia’s bloodiest battle, plagued with ethnic cleansing, grenades and snipers.

One night in 1993, there was knocking on the Bilic’s door. There stood Bilic’s father’s childhood friends armed with rifles and a haunting message: The family had one hour to pack-their belongings and leave.

“His friends were like, You know what’s going on. You know that as a Muslim family you are no longer welcome here,” Bilic said. “Because we know you, because our kids play with each other, because we played with each other, you have an hour to get your stuff and you have to leave.”

According to Bilic, her father’s friends said the Serbian army was coming into town the next day and if they did not leave immediately, they would fall in the hands of a Muslim concentration camp.

Bosnia boasts a blend of distinctive religions like Catholicism, Eastern Orthodoxy and Islam, which is the reigning religion of the country. During the war, Muslims fell victim to the Yugoslav army’s ethnic cleansing agenda.

Flustered yet optimistic, a prevailing sentiment among Bosnians during the war, the Bilic family packed their things and left everything behind.

“Nobody thought the war was going to last for as long as it did,” Bilic said. “My father was like, ‘OK, just grab your stuff we’ll be back next week.’  That was his mentality.  That it would be over. We left our car, we left our dog, we left our cat. We left everything.”

Bilic and her family made their way to her grandparent’s house where they endured the wrath of the war.

According to Bilic, sometimes herself and other families in her apartment building had to hide in a basement for weeks without running water as the city was under siege.

On New Year’s Day, Jan. 1, 1994, Bilic was outside with her grandmother and friends when four grenades exploded abruptly.

“I got caught,” Bilic said. “All I could see was blood, all I could hear was ringing.”

Bilic woke-up from the explosion and could only see the blood dripping from her eyes.

The shrapnel from the grenades tore at her face and legs, and unbeknownst to her, tore into her head, completely cutting off her vision.

After the grenades ceased, she was taken to a nearby hospital where she was treated for her injuries.

Though doctors were able to save her legs, they did not have the resources to surgically remove the shrapnel implanted in her brain.

“The doctors were unable to treat my head injury in Bosnia so the UN stepped in and evacuated us,” Bilic said.

When the UN assigned Bilic and her family to seek refuge in Czechoslovakia, her parents were elated.

As fate would have it, Czechoslovakia placed the Bilic family on a waiting list for reasons unknown,  preventing the family from entering.

Due to the severity of Bilic’s condition, the Bilic family was immediately re-located to Orlando, Florida overnight.

“Refugees don’t  get to pick where they are re-settled,” Bilic said. “They’re put on a list and whatever country takes them is the country they go to.”

The Bilic family embarked a plane for the first-time to Orlando with a broken spirit and a little more than a few suitcases, breaking headlines as the first Bosnian refugees to enter the U.S.

With the help of a local mosque, the Bilic family found a clean home and Bilic’s parents wasted no time in assimilating to the American way of life.

With time, they worked their way up to become housekeepers at Walt Disney Resorts, determined to establish a successful future for their two daughters.

As an adult, Bilic graduated from the University of South Florida with a bachelor’s in biomedical science, fulfilling her parent’s dream.

Knowing her heart was not in the medical field, Bilic eventually pursued a master’s in public administration at the University of Central Florida.

Today, Bilic is the site manager for the International Rescue Committee, a nonprofit global organization providing services to displaced refugees like she once received.

The IRC strives to assist refugees in attaining economic self-sufficiency and cultural integration through a 90-day program.

The program is funded by the federal government along with the state department. 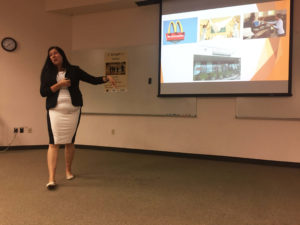 Una Bilic stands in front of an audience on Friday, March 31 in Edwards Hall in room 112 during her lecture, “A Refugee’s Story.” Bilic spoke about how when she first moved to the U.S. with her parents, thier first jobs were at McDonald’s.They eventually moved up to becoming housekeepers at Walt Disney World, determined to establish a successful future for their two daughters. (EN Photo / Alexandra Figares)

“We manage their money because we have to make sure their rent is paid for the first 90 days,” Bilic said. “After that, it’s our job to make sure that somebody in the family is employed so they can start paying their own rent. But they never see the money.”

The state requires the IRC to meet certain goals to maintain and receive funding, like assisting families in obtaining a social security card within the first week of arrival.

Other goals such as employing adults and teaching asylees how to use a washing machine are part of the 90-day program.

According to Bilic, the largest population of refugees entering the U.S. are Congolese.

“We’re all going to have our personal ideas on refugees,” Bilic said. “But I want people to understand the process. Don’t let the media fool you. They’re [the refugees] vetted, they’re vetted for years and they come fully ready and accepting that they’re coming to the U.S.”

According to Bilic, there is a vigorous 12-step vetting process for admitting refugees into the U.S., taking up 30 months to complete.

Syrian refugees must undergo an additional step for a more thorough vetting process.

“When people are like, ‘Who are these terrorist men coming into our country?,’ I’d like to ask them if you’re talking about little Mohammed who is in the 5th grade? Because that’s who’s really coming into this country,” Bilic said. “Seventy percent of refugees entering the U.S. are children. That’s a fact. Most of the time it’s the mother with all those children and the father stays behind.”

With shrapnel still lodged in her skull, and the memories of war actively breathing through the scars on her legs, Bilic embarks on a journey to reveal her story and help others understand the plight of refugees and what lies behind the re-settlement process.

Pictures of the war perceptibly fill Bilic’s large blue eyes as she tells a story of hardship and resilience.

The Yugoslav army showered Bilic with blood and irreversible scars, unsuspectingly building a bridge between Americans and refugees.