New presidential search timeline approved by Board of Trustees 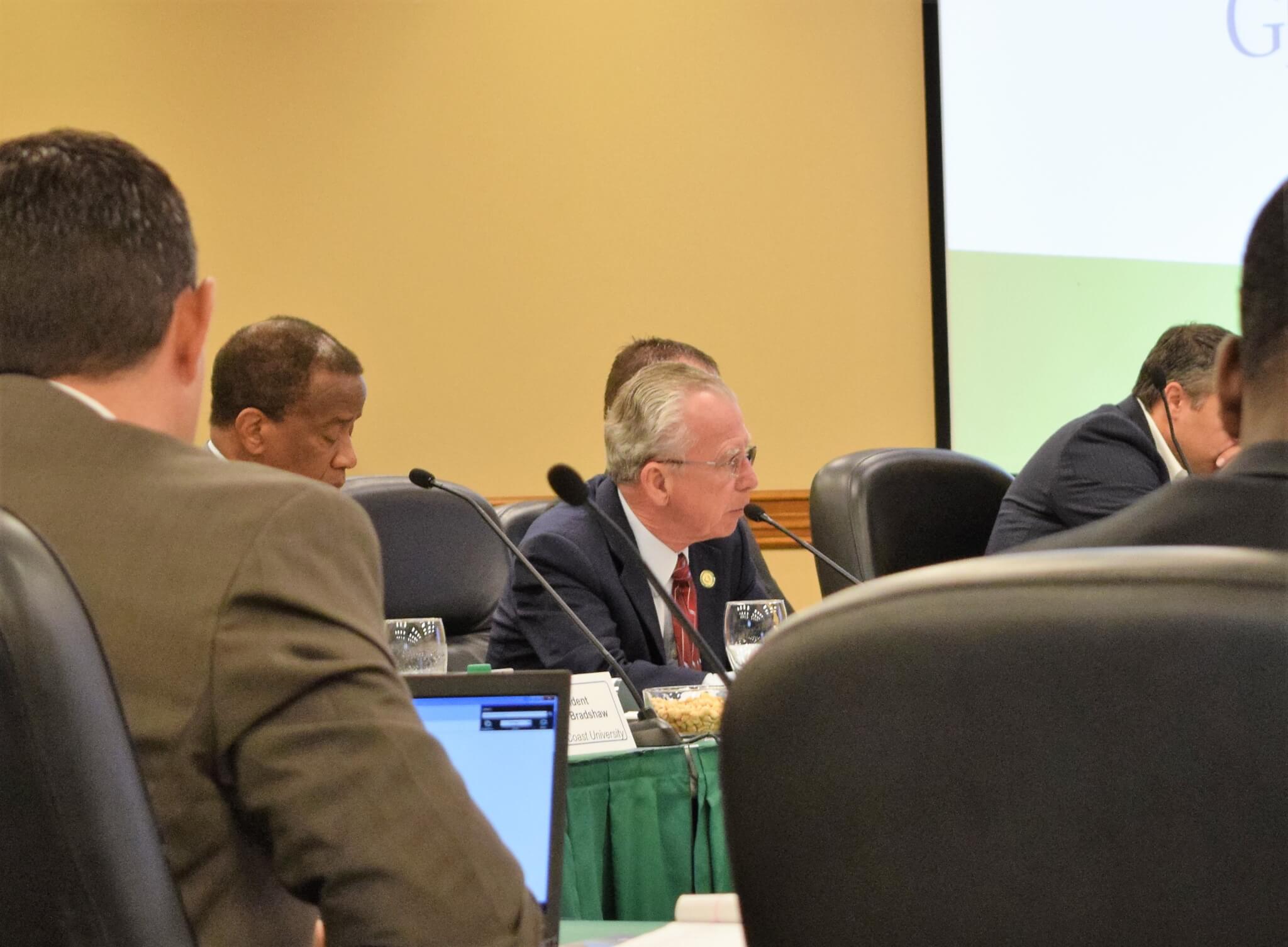 Board of Trustees Chair Dudley Goodlette speaks into his microphone during the last BOT meeting of the year on Friday, Dec. 9.

After hundreds of applicants, eight on-campus interviews, two drop-outs and one trek to Tallahassee, the Presidential Search Advisory Committee can officially move forward with its ongoing search for FGCU President Wilson Bradshaw’s replacement.

The committee’s advised timeline, which extends the best consideration time frame for applicants to Tuesday, Jan. 31, was approved on Friday, Dec. 9 at the last Board of Trustees meeting of the year.

After sharing to the committee why the timeline had to be updated, PSAC Chair Ken Smith motioned for the group to approve the action item.

The committee had to advise the timeline to accommodate to the lack of a third applicant to bring forward to the BOT. The committee voted to move forward two applicants instead of three, which went against the Board of Governors regulation that states that a university must bring forward at least three applicants to its school’s BOT.

When BOT Chair Dudley Goodlette visited Tallahassee to see if this predicament counted as a “special circumstance” under BOG law, he was turned away.

During the meeting, Smith blamed The Florida Sunshine Law as to why it’s difficult to hire a new president in the state.

“The reality is Florida is a tough place to get sitting presidents to apply that are high achievers,” Smith said. “Because what they have to do is expose themselves for a period of time.”

The Sunshine Law, which requires that records of governmental bodies in the state are made open to the public, caused applicants to bare all to FGCU students, faculty, staff as well as the media.

During the meeting, BOT Corporate Secretary Susan Evans revealed that a few other applicants that remain in the pool have indicated to executive search firm Witt/Kieffer that they are looking at withdrawing their applications.

Smith also said that one of the two applicants that were voted forward has hinted that other employment opportunities have come their way.

“One of them has told me that they’re not looking at any other jobs; the other one has said that he is being recruited for other jobs, but he has not seen something that they want to take on (sic),” Smith said.

Now that the advanced timeline has been approved, Witt/Kieffer will send letter to all applicants updating them on the search. More on-campus interviews as well as student, faculty and staff forums will also be held in February once the committee reels in the new batch of applicants.