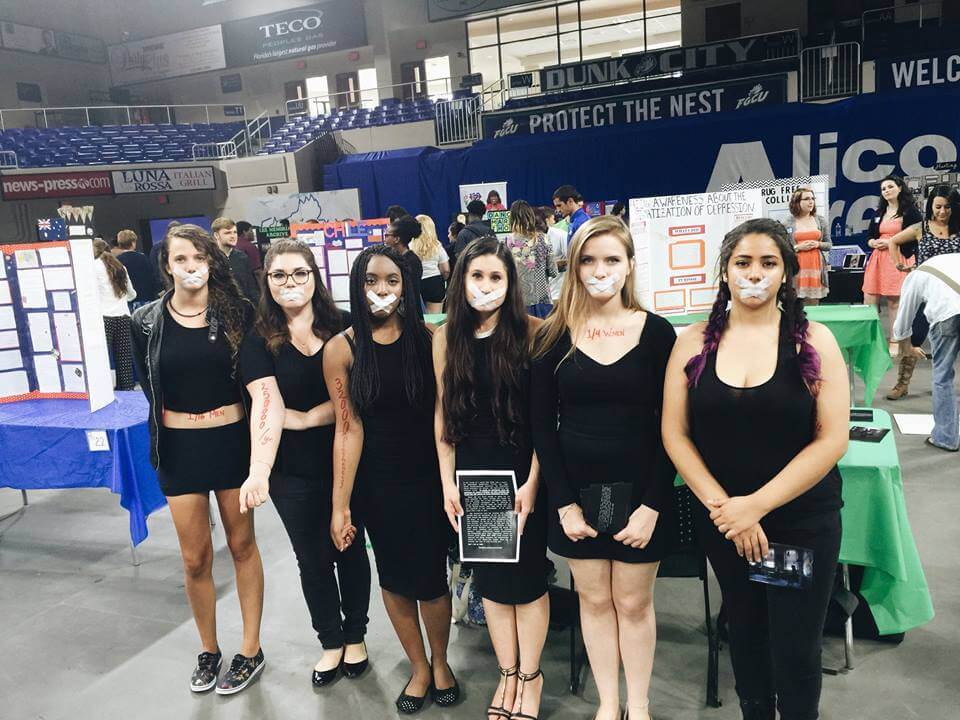 Photo courtesy of (S)he Will Fade

One in five women and one in 16 men will be sexually assaulted while in college according to the National Sexual Violence Resource Center, and FGCU is not exempt from this.

FGCU Title IX coordinator Brandon Washington said, in the 2015 year, there have been between eight and 10 reported cases to his office as well as the University Police Department and the Dean of Students Office.

Most recently, a student visited UPD on the morning of Thursday, April 7 wishing to report a sexual battery case. According to the police report, he said he was assaulted at about 3:40 a.m. that morning, waking up to a male student on top of him. His roommates said they didn’t know anything about the situation.

“If a student makes an allegation of sexual assault, our university wants to make sure that we’re there for them,” Washington said. “With any information that comes through my office, we certainly reach out to the students.”

As the Title IX Coordinator, Washington is responsible for investigating cases of discrimination based on sex as well as sexual assault. His office is also obligated to conduct trainings on sexual assault and prevention. According to the U.S. Department of Education, Title IX states that “no person in the United States shall, on the basis of sex, be excluded from participation in, be denied the benefits of, or be subjected to discrimination under any education program or activity receiving Federal financial assistance.”

In 2015, the Office of Institutional Equity and Compliance completed 16 full investigations of alleged harassing or discriminatory conduct. Of those 16, 13 of them were Title IX complaints that were investigated. Four of these cases were classified as having sufficient evidence of policy violation regarding Title IX with the remaining nine had insufficient evidence of policy violation.

Washington said it would be difficult to pinpoint the exact number of students who come to his office over a course of a semester.

“It would be hard to say,” Washington said. “Over the course of the semester we talk to dozens of students.”

Not all of these students visit his office to report a sexual assault, however.

“Not all of them are making allegations,” Washington said. “Some of them want more information on Title IX or training. We speak with dozens of students about a myriad of different issues.”

FGCU alumna Erica Waller was sexually assaulted approximately a year and a half ago by a friend’s roommate at their apartment off campus. She decided to stay the night instead of driving intoxicated and woke up to her attacker touching her.

“I moved over and rolled further away from him,” Waller said. “I just laid there thinking, ‘Am I dreaming? Did this just happen?’”

Waller, who went to Counseling and Psychological Services a week after the incident, said Washington was extremely helpful to her.

“The most supportive thing Brandon did was offer himself in a way that was open to me,” Waller said. “He was willing to do what I wanted. He met with me and talked to me about different options and mainly offered his support.”

Megan Shindler, a senior double majoring in political science and theater, shed light on sexual assault violence both on and off campus with her theatrical ethnography “S(he) Will Fade.” The project, which took Shindler four years to complete, was made up of a live performance that the cast has been performing all across Southwest Florida and through social media promotion.

According to a survey that the OIEC conducted during the fall 2015 semester, a majority of students do not know who the Title IX Coordinator is and how to contact him. The OIEC sent a “Student Sexual Violence Awareness and Prevention Survey” to all FGCU students on September 28, 2015. By the November 6, 2015 deadline, 613 students had participated and given input about how well students are educated on the resources available to them on campus.

Of the students who participated, 74.30 percent reported that they did not know who the Title IX Coordinator is or how to contact him, and 87.01 percent of participants said they have not attended a Title IX-related training or program on sexual violence awareness in the last 12 months. Despite those numbers, 65.08 percent of students reported that not including FGCU’s current mandatory training (My Student Body) students should be required to take at least one hour of sexual assault awareness and prevention training during their freshman year.

According to the 2015-16 UPD Campus Security and Fire Safety Report, there were three reported forcible sex offense cases on housing grounds on campus in 2014. This number had increased by one from the following year. In 2013, there were two reported on housing grounds on campus as well as two off campus. As reported by the National Sexual Violence Resource Center, rape is the most under-reported crime. Sixty-three percent of sexual assaults are not reported to the police.