The immigrant narrative is the American narrative 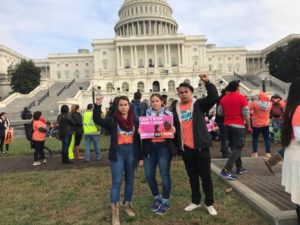 On November 9, United We Dream (an organization that seeks to empower immigrant youth) issued a rallying call among immigrants to push for urgency within Congress. With the expiration of the current government-spending law looming in the month of December, this organization requested that our government propose a Clean Dream Act.

A ‘Clean Dream Act’ would inherently include comprehensive reform that provides young immigrants with a pathway towards citizenship without utilizing them as pawns or political bargaining chips. Along with two other FGCU student leaders and activists (Arletys Gomez and Bryan Oliva-Infante), I joined over 600 student youths and other activists congregating from all over the country. We successfully occupied one of the Senate buildings and peacefully demonstrated.

Whilst in our nation’s capital, I felt the strong need among the hundreds of participating demonstrators to combat the nationalist fear-mongering ideology that has taken ahold of American politics and the xenophobic and racist rhetoric which it produces.

Often when discussing immigration, particularly under our current political climate in our nation, we willingly separate the immigrant narrative from that of the American narrative. Our immigration system is a broken one that requires comprehensive examination to consider the political and economic contextual factors that force immigrants to arrive within the United States’ borders.

These are students, tax payers and wage-earning individuals who have all sought a life in this country and subsequently become woven into its economic, social and political fabric. With the inaction on behalf of Congress to implement a ‘Clean Dream Act,’ the average American has a greater responsibility, now more than ever, to fight for a just immigration reform.

As a Cuban-American, I had the privilege of benefitting from the Cuban Adjustment Act of 1966, which eventually allowed me and my family to gain permanent residency when I first came to the United States in 2004.

The Cuban Adjustment Act accommodates to the political and economic suffering and oppression from which the Cuban-diaspora bears under the Castro Regime. It allows Cuban nationals to apply for residency status and other benefits after exactly one year of having arrived within the United States. The reality is that many immigrants do not share the same experience.

As the child of a Cuban mother, I was the recipient of a political era where policies were able to adjust and reflect the political desperation within my mother’s country of birth. From understanding the struggle of what it means to come to a country and leave everything behind for a better life, I believe we must look to redefine the very definition of citizenship.

We must understand that that the term is not just limited to documentation or to a specific creed, but rather that it encompasses anyone who positively contributes to the joint social and political framework. The immigrant narrative is just one of the many that serve as an integral part of this country and its very foundation. We must reach for the ability to sympathize and comprehend each other’s equal want to partake and contribute to our society. With this, we can create the necessary political change and take part in a joint purpose to strive towards an equal and just America.