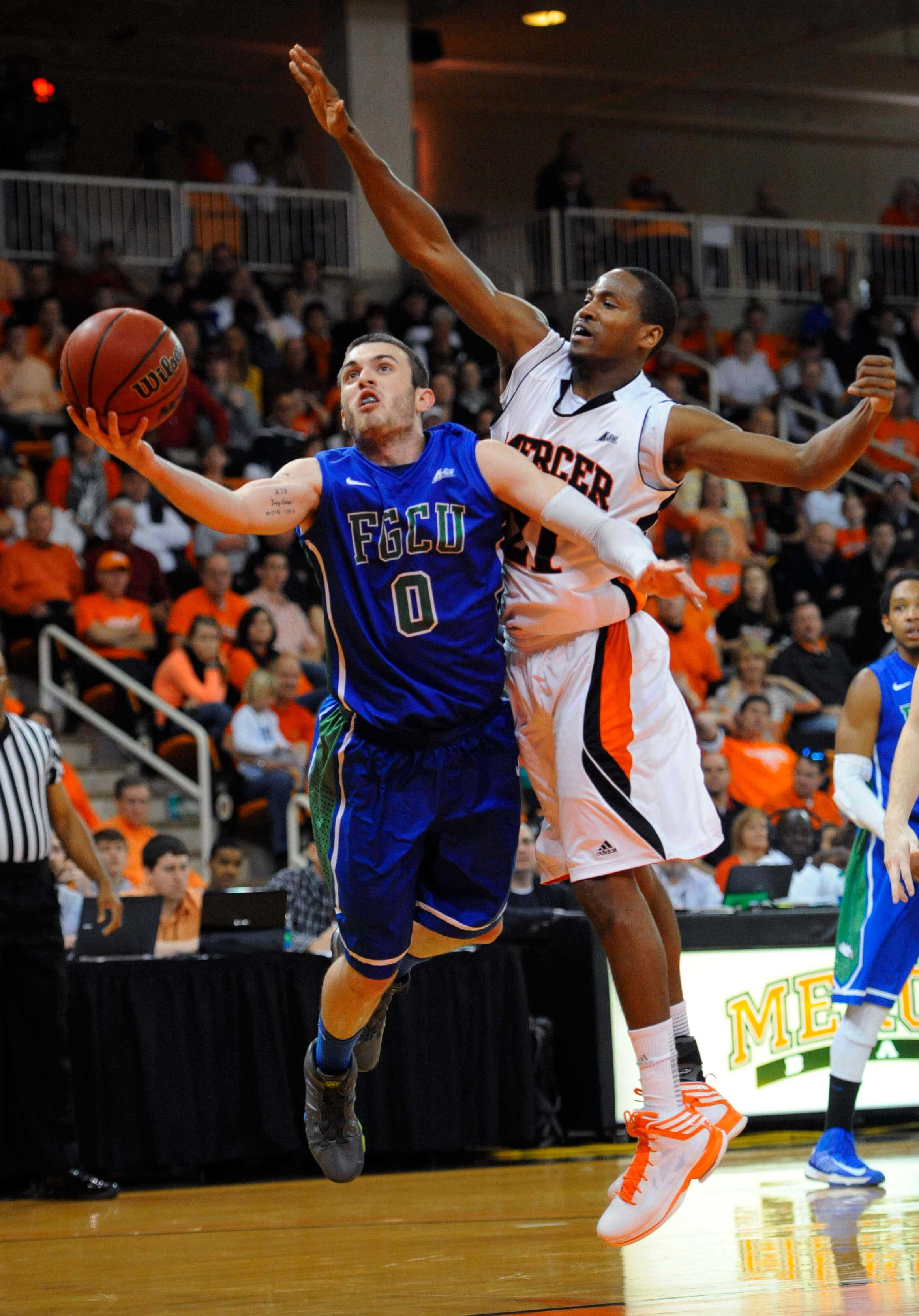 FGCU defeated the Mercer Bears, 88-75, in the Atlantic Sun tournament championship to earns its first-ever bid to the NCAA Tournament.

FGCU, which began its inaugural season in 2002, shifted from Division II to Division I play when it joined the A-Sun Conference in 2007. The Eagles endured a four-year transition period in which they were ineligible to participate in post-season action.

The first-year coach guided the sixth-seeded Eagles on an unlikely run in the A-Sun tournament where they faced top-seeded Belmont in the championship. They lost 83-69 but gained valuable experience.

“Last year we were young and inexperienced,” Enfield said. “We had never been in a situation like this before. We didn’t know how to handle success or failure last year. We were talented. We just didn’t know what we were doing.”

Sophomore guard Brett Comer said he and Brown spoke before the tournament began about the disappointment they felt after last season’s championship loss.

“Last year, sitting there, the feeling was horrible,” said Comer. “We wanted to come out and push momentum on everybody and step on everybody.”

Comer and Brown were determined to never feel that disappointment again.

Determination struck Brown at a crucial point of the 72-58 semifinals triumph over Stetson on Friday.

The Eagles were stuck in a shooting rut in which not a single player, aside from Brown, scored a point for the first 11 minutes of the first half.

Brown’s eight points during the stretch kept the Eagles within reach of the Hatters.

“I was doing what I can to keep us in the game,” said Brown, who finished the game with 18 points. “I knew my teammates were going to get out of the little drought they were in.”

When the inevitable day came to face the top-seeded Bears on their home court for the championship game, the Eagles were fired up.

“We feed off this Mercer crowd,” Enfield said.

The sea of Mercer fans — painted and dressed in orange — roared as the Bears went on a commanding 11-3 run to begin the game.

The Eagles, who have led at halftime in 20 consecutive games, rallied to a 38-36 lead at the halfway mark. Comer sparked the charge with 12 points in the first half.

“We didn’t do any game planning at halftime,” Enfield said. “We just said the team that defends and goes on the run early in the second half will win the game.  There were no X’s and O’s talk at halftime; we didn’t go over anything. We just said this is on you. You are where you want to be. You’re in the Atlantic Sun championship game. You’re up two at halftime. You’re on their home court and this is a lot of fun. So go win the game.”

Enfield’s words rang true as the Eagles began the second half with a 13-5 run to put the Eagles on top by 10.

Mercer would never get within four points of the lead.

Comer, who finished as the game’s leading scorer with 21, made the All-Tournament team and took home Most Valuable Player honors.  The sophomore averaged 13 points and 6.7 assists in tournament play.

Brown and junior Chase Fieler were also selected to the All-Tournament team.

Fieler led FGCU in scoring with 22 in its 73-63 quarterfinals victoryover North Florida on Wednesday. The 6-foot-8 forward averaged 16 points per game and seven rebounds throughout the tournament.

FGCU will find out who its first-round opponent in the NCAA Tournament will be on Sunday, March 17, also known as Selection Sunday.

The Eagles will head to the NCAA Tournament determined to make this dance one they will never forget.

Stetson (24-8) did not get the memo.  The Hatters overcame a 13-pointhalftime deficit to slay the Eagles, 70-64, in the A-Sun tournament championship game on Saturday.

“If you get tested a lot and you’re in a lot of close games, then you are better prepared for that situation,” said Eagles head coach Karl Smesko. “You get a little tight or on-edge when you haven’t been in that situation for a couple of months.”

The loss comes as a shock to the Eagles (27-6),that had won all 20 conference games by double figures. They hope the NCAA selection committee notices their dominance. After losing the automatic bid, FGCU must wait until Monday night to find out if they get an at-large bid selection.

“If it’s supposed to be about how you play the second half of the year, we’re definitely a NCAA tournament team,” said Smesko.  “We had a chance so we didn’t have to be in that position today, but we didn’t take care of it. So it will be up to the NCAA committee to determine if we are a tournament team. If not it will be the NWIT.”

ESPN currently ranks FGCU as the third team out of the NCAA tournament.

If they don’t make The Dance, the Eagles will be haunted by a 5-minute scoreless stretch during the second half when they saw their double-digit lead disappear.

Even senior Joyce Iamstrong, the A-Sun tournament’s Most Valuable Player award recipient, could not bail FGCU out with her career-high 31 points.

Iamstrong, who averaged 10.7 points per game in the regular season, beefed up her offense in the tournament, leading the Eagles in scoring with a 25.3 average.

“Before today, we hadn’t played a game in single digits in our conference,” Smesko said.

The A-Sun tournament provided memorable moments for guards Sarah Hansen and Iamstrong, who should have been celebrating career milestones. Instead the athletes were brokenhearted.

Hansen, a redshirt junior, couldn’t even talk about the loss on a night that she broke the school’s all-time scoring record.

“There’s been a lot of very good players in the FGCU program,” a grief-stricken Hansen said.  “Obviously it means a lot to be in the ranks of some of the best players that have gone to FGCU.”

Hansen, the 2013 A-Sun player of the year, sunk a 3-pointer early in the first half of the championship game with one second left on the shot clock to break Adrianne McNally’s record (1,415). Hansen finished the night with 13, leaving her with 1,427 in three seasons.

“[Hansen’s] the best player we’ve had at FGCU,” Smesko said after the semifinal victory.

However, Hansen would trade the record for another crack at the A-Sun tournament championship.

Smesko will trade the loss for a learning lesson.

“I try to use loses like this to motivate me to get better,” Smesko said. “We lost a (NCAA Division II) national championship game (in 2007), and we learned a lot from it. We came back better and stronger.

Last year we lost in NCAA tournament in a real heartbreaking game, and we came back and learned from it, got better stronger.”