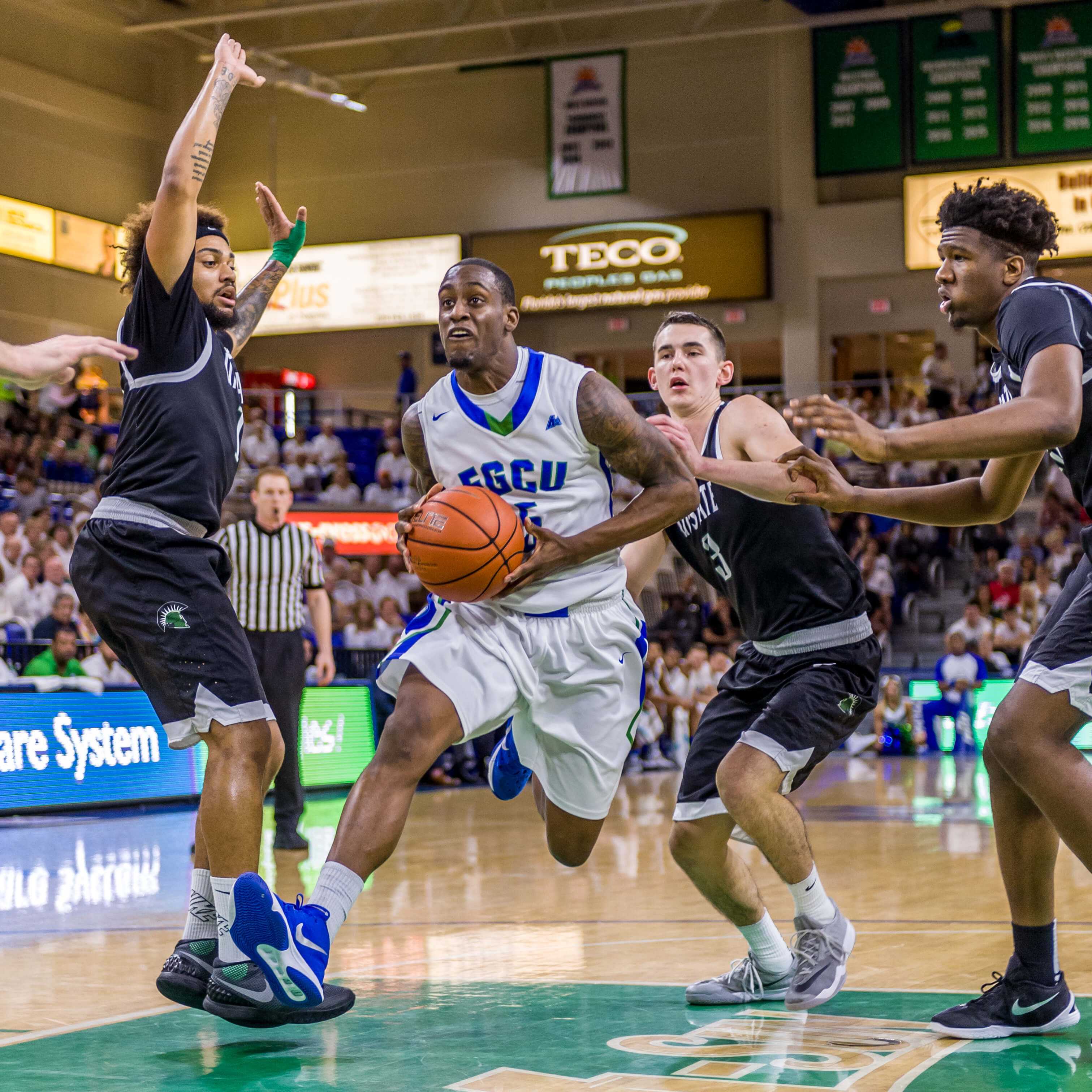 In game two of an FGCU basketball double-header, a 43-point first half for the men’s basketball team sparked it to a dominating win over USC Upstate, 85-56.

For the second-straight game, Demetris Morant sat out to rest an injured right leg injury and is listed as day-to-day.

It was an offensive showcase for guards Christian Terrell and Zach Johnson, as they led the way for the Eagles in a shooting clinic.

Terrell ended the night for the Eagles with 18 points, shooting 7-12 from the field with two daggers from behind the arc to go along with his two rebounds and his four assists.

Johnson also ended the night with 18 points and was lights out from the field, shooting 5-8 on the night along with a perfect 3-3 from long range.

To complement the guard’s offensive performance, Antravious Simmons was just three rebounds short of a double-double, ending the night with 10 points, seven rebounds and three assists.

Gold medalist Julian Debose also ended the night in double figures with 10 points, going 2-3 from behind the arc.

The Eagles dominated on both sides of the ball, causing turnovers on the defensive side and finishing their opportunities on the offensive side. At the beginning of the first half, the Eagles went on a 15-0 run for over four minutes to build a 19-8 lead with 11 minutes left in the half. FGCU showed no signs of slowing down, as it finished the half up 43-17.

After giving up a 21-point halftime lead in their previous game against NJIT, the Eagles made sure lightning didn’t strike twice.

“We knew we couldn’t take our foot off the gas,” Terrell said. “We wanted to play hard the whole game, no matter what the score was, and came at it like it was 0-0.”

Upstate came out stronger and played better offensively, getting its shooting percentage up to 55.6 percent from the field and 66.7 percent from three, FGCU’s play on the offensive side of the ball was just too much to handle for the Spartans. The Eagles’ 66.7 percent from behind the arc propelled them to 84-56 victory, helping them move to 3-0 in Atlantic Sun Conference play.

“I thought, besides a pretty sluggish start, we played well,” FGCU head coach Joe Dooley said. “We had the ball moving well, obviously, with 22 assists and 30 field goals. It was terrific, and it was nice to not have to play guys a lot of minutes because they were able to share it and move it. And, it was a good win.”

After a lengthy home stand, the Eagles will take their six-game win streak on the road when they travel to Kennesaw, Georgia on Thursday, Jan. 21.