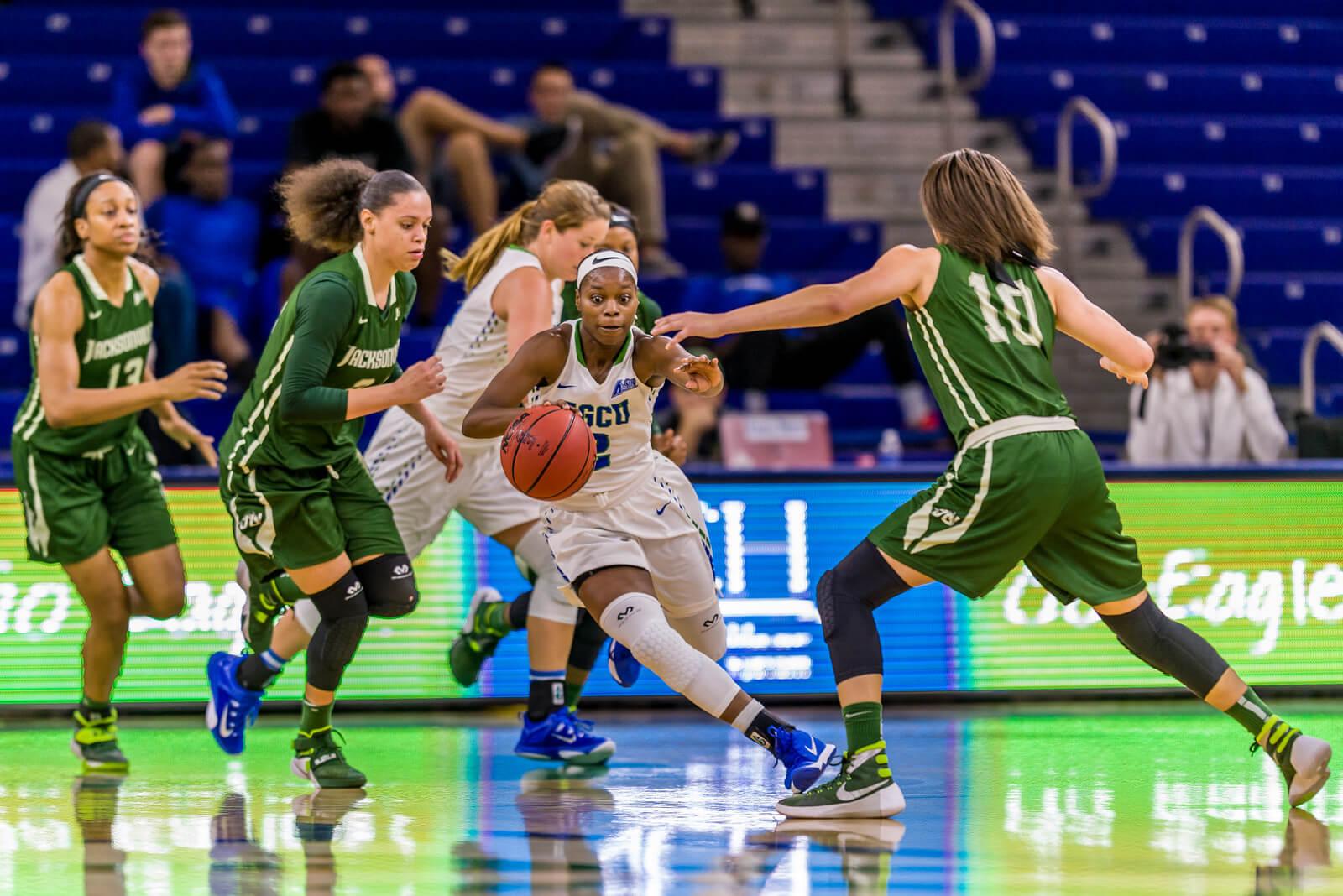 In a battle of conference top dogs, going into the contest at an equal 6-0 in Atlantic Sun Conference play and respectively with impressive win streaks, the FGCU women’s basketball extended its win streak to 12 with a 58-39 victory over Jacksonville.

With both teams dominating their opponents in conference play, with double digit wins in almost every contest, the Eagles snapped the Dolphins’ eight-game win streak to earn the top spot in the A-Sun.

FGCU was recently tabbed by ESPN as the top team in its mid-major rankings, and it showed why, dominating Jacksonville on both sides of the ball, converting easy buckets and forcing turnover.

Along with these key factors leading the Eagles to victory, FGCU also rode double-digit scoring by Katie Meador, Kaneisha Atwater and Whitney Knight.

Guard Kaneisha Atwater, who is averaging 14.7 points and 5.7 rebounds per game for the Eagles, finished the night with 16 points, seven rebounds and one assist. Atwater also contributed to the Eagles’ aggressive play, diving for every loose ball and fighting for extra possessions to keep her team at a conference best 7-0.

Providing the biggest spark for the FGCU offensive in this key game was Katie Meador. Meador provided instant offensive off the bench for the Eagles, scoring a career-high 16 points, with 13 of them coming in the first half, as well as grabbing six rebounds with four of the six coming on the offensive glass. Head Coach Karl Smesko had high praise for Meador’s spark coming off the bench.

There was high intensity that flowed through the crowd at Alico Arena with these two conference unbeaten going head-to-head. In the first quarter, after a quick 4-0 run by the Dolphins, Knight responded back with a three while getting fouled, resulting in a four-point play and catapulting the Eagles offense; they would not look back from there. Forcing turnovers and converting on the other end at the end of the first quarter, FGCU led 16-10.

In the second quarter, it was all Meador, coming off the bench and having an instant impact. She grabbed five rebounds and scored nine points very quickly.  By the end of the half, FGCU’s defense forced 13 Dolphin turnovers, and Meador’s 13 points propelled the Eagles to a 29-16 lead at the half.

“This game was kind of an emotional game for me because last time we played Jacksonville, I tore my ACL,” Meador said.  “It lit a fire under me, and if it wasn’t for my team, I wouldn’t have scored the points that I had. So, I was proud to be a part of the team’s good play tonight.”

After struggling defensively against the Eagles, the Dolphins switched from man-to-man defense to more of a zone defense in the second half, but it wasn’t enough to help them get the push they needed to cut FGCU’s lead; they continued to turn the ball over and allow points off turnovers. At the end of the third, thanks to the two energizing and-ones by Meador and Atwater, FGCU led at the end of the third 45-29.

The story of bad ball control haunted the Dolphins thoughts all of the game, as they continued to allow the Eagles more opportunities to increase their lead. Seven fourth quarter points by Atwater as well as high pressure defense was the nail in the coffin for Jacksonville as the Eagles triumphed over the Dolphins 58-39.

Defense played a key role in FGCU’s big win over Jacksonville, forcing 23 turnovers and holding the defense without a three-point field goal throughout the entire game. This marks the third game this season that the Eagles held a team without a three-point field goal this season. FGCU also shut down Jacksonville’s leading scorer Sherranda Reddick, leading the Dolphins with 12.7 points per game, to zero points.

“Our defense was excellent and everyone contributed,” Smesko said. “It was just a whole team effort defensively. Everybody did their job. Everybody understood the game plan, and they tried to make it as difficult as possible to get scoring opportunities.”

Now the only undefeated team in the A-Sun, the Eagles host UNF at Alico Arena on Saturday, before embarking on a three-game road trip where their first stop will be in Jacksonville to face the Dolphins once more.