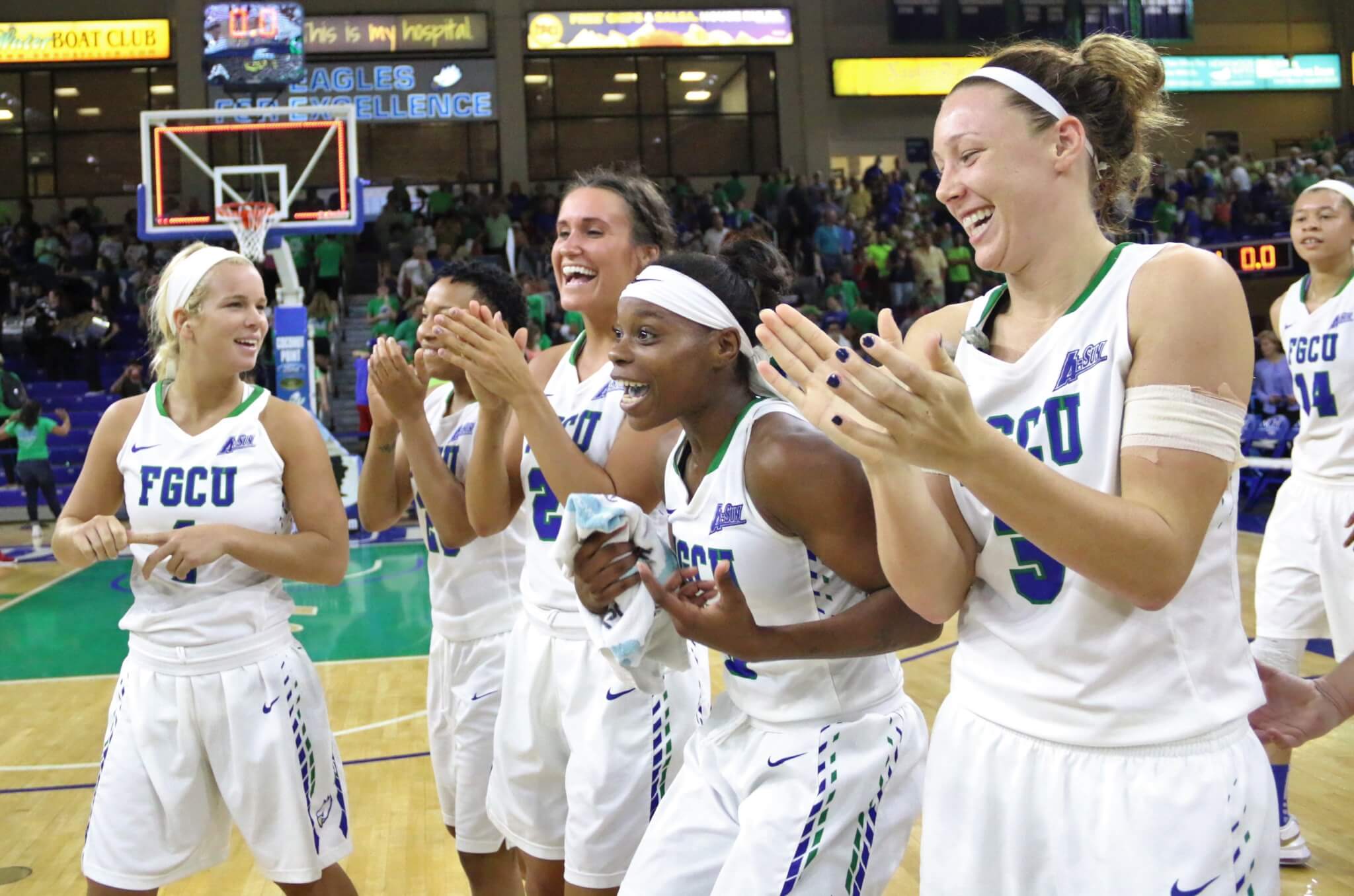 FGCU senior Kaniesha Atwater and the rest of the FGCU women's basketball team reacts to the announcement that FGCU would host the Final Four round against Michigan following Monday night's WNIT Elite Eight game against Hofstra at Alico Arena. (EN Photo / Kelli Krebs)

The same team that swept its conference but did not earn an NCAA bid is advancing to the WNIT Final Four.

The FGCU women’s basketball team took down Hofstra Monday night in front of a crowd of 3,307 in Alico Arena where FGCU picked up its fourth consecutive post-season win with a 61-46 victory. With the win, FGCU advances to its first-ever WNIT Final Four and will host Michigan on Thursday night.

“We’re just excited to move to the Final Four,” said senior guard Kaneisha Atwater, who led the floor with 19 points. “I think we grew up from the past games. Our loss (in the A-Sun Championship) definitely opened our eyes a lot. We’ve gotten better. We’re blessed to be here.”

Earlier this season, FGCU lost in a heartbreaking conference finale to Jacksonville.

On Monday night, the game seemed easy for the Eagles, who held the lead for the entire game, with the exception of the first minute of play where the score sat at 0-0. In the WNIT, FGCU is the only remaining team to have decided every game by double digits.

Michigan — which until Monday, was the only other team in the tournament to have double-digit wins through all rounds — took down Temple Monday night in its closest WNIT contest yet. The game was decided in the last seconds with a jumper from Michigan after Temple held a double-digit lead for a large chunk of the game.

“Tournaments are always exciting,” coach Karl Smesko said. “We have to prepare like we did for all these other games. We know Michigan is a really good team.”

FGCU is the first Atlantic Sun Conference team to play in the WNIT Final Four since 1993.

“We’ve been playing with a chip on our shoulder because we felt like we should have been in the NCAA tournament,” two-time A-Sun Player of the Year Whitney Knight said.

With eight seniors on the bench, the Eagles have a lot more than their season on each game, they have their collegiate careers on the line.

FGCU will host Michigan at 8 p.m. Thursday for a spot in the WNIT championship.