Sherwin maintains high standards on and off course 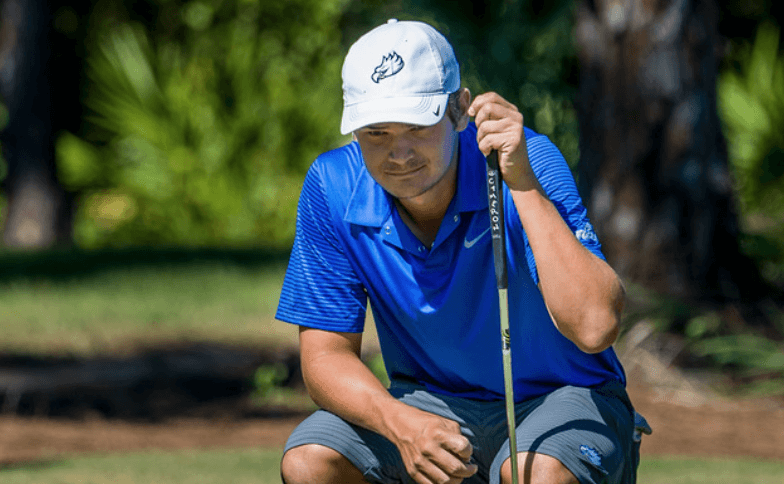 As captain of the FGCU golf team, Jake Sherwin maintained a 3.56 cumulative GPA, earning a spot on the dean’s list every semester since fall 2013. Though this seems like a daunting task to most, Sherwin has executed it all perfectly and has earned himself a spot on the Atlantic Sun All-Academic Team for the second time in a row.

“It really is an honor receiving this award again,” Sherwin said. “I didn’t really think too much of it. I’ve been shooting for the Scholar-Athlete award, but (Austin) Schultz was very deserving.”

Holding the captain position was an experience Sherwin valued, and as a four-year player, Sherwin felt a sense of leadership over the team when his senior year came. On the course, Sherwin’s 74.69 career scoring average ranks 10th in program history, and he is the program’s all-time leader in birdies with 332, eagles with 12 and rounds played with 120. With stats like these, it is easy to see why Sherwin was chosen for the leadership position.

“I felt like I had established myself as a leader and have put a lot of effort into school and on the golf course,” Sherwin said. “When Austin (Schultz) came, I wasn’t too worried about being overshadowed as a leader. I knew he would push me as an athlete and create a good competitive rivalry.”

With assistance from both coach Eric Booker and athletic tutors, Sherwin shined on and off the course. These influential people were key motivators during Sherwin’s career as an Eagle.

“We talk a lot about the leadership role and try to develop everybody,” Booker said. “The help at FGCU is extremely good and a lot of support comes from mentors and tutors which aids them on and off the golf course.”

More than coaches, tutors and individual practice, Sherwin also relied on teammates such as Austin Schultz for extra motivation. This competitive rivalry assisted Sherwin with personal growth both as a student and as an athlete.

“I knew Jake (Sherwin) from high school, and we have always had a good friendship with one another,” Schultz said. “He’s a great player, and we have motivated each other to get better from the time we started playing with each other in high school.”

Having recently graduated with a bachelor’s in communication, Sherwin hopes to excel in his future career, similar to the success he has shown during his college career.