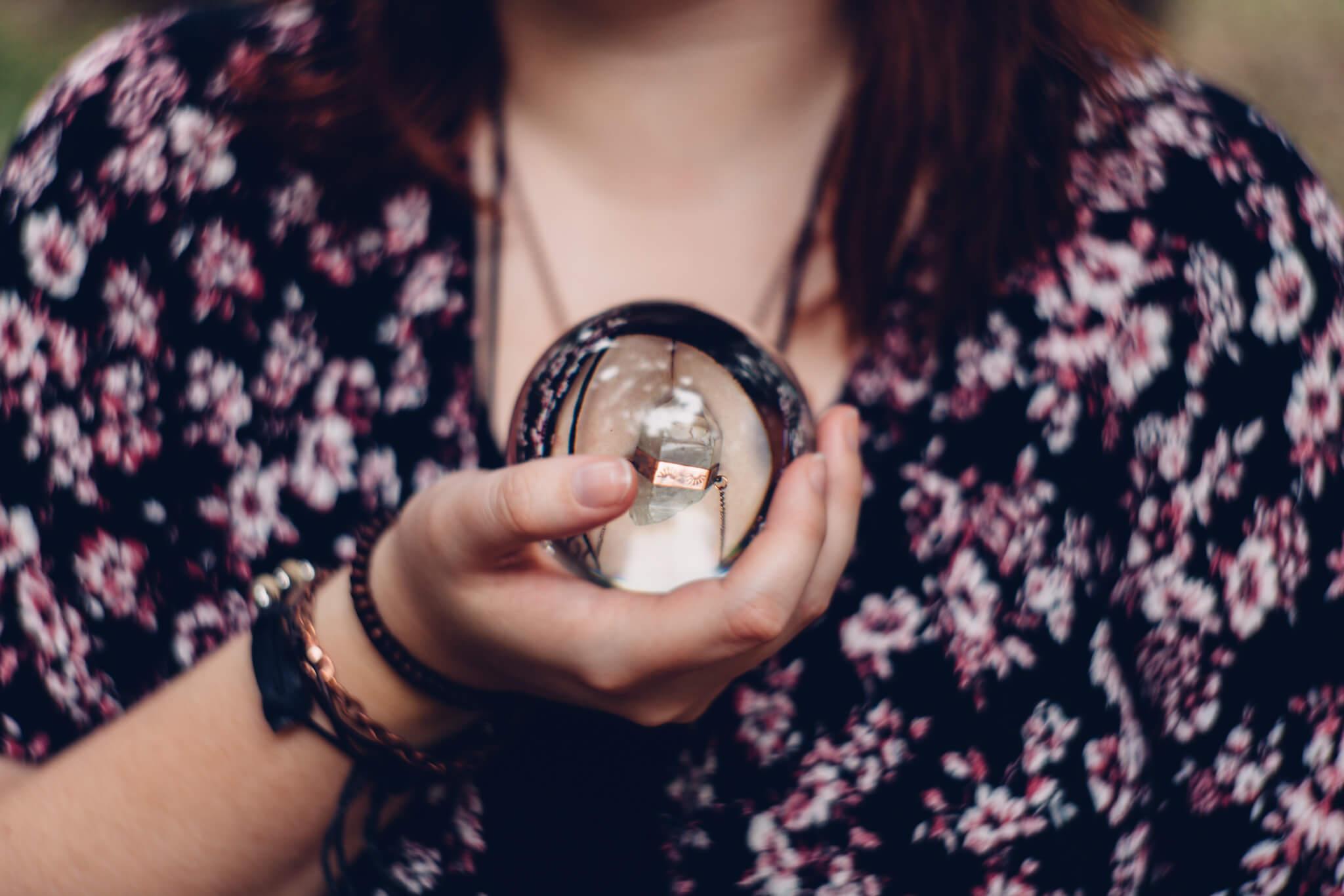 With a jar full of pennies, a metal stamp and the word “luck,” Carolina Londono created the first Cheap Luck penny bracelet to be sold in her jewelry store, Cheap Luck Co.

Londono, 23, is a jack of all trades. In her younger years, she enjoyed drawing and painting. In middle school, she picked up photography as a hobby. Now, she has found herself embarking on a metal-and-crystal filled journey with her latest endeavor in jewelry making.

Carolina Londono began her foray into jewelry making this year. Prior to cre- ating her Cheap Luck bracelets, she found a knack for photography. Londono is wearing a faux lavender point resin crystal. (Photo courtesy of Carolina Londono)

“I didn’t have any metal to practice with, so I grabbed for my handy jar of pennies and thought, ‘How could I make this a piece of jewelry?’” Londono said. “I thought lucky pennies were such a cute thing, so I stamped ‘luck’ on them and called them the cheap luck penny bracelet.”

From there, Londono took an intro to metal working class at Crealde School of Art, a community-based nonprofit arts school in Winter Park.

Once she brushed up on her skills, she turned to Etsy to create Cheap Luck Co.  — the name was inspired by those first few penny bracelets made with two holes and some string.

Every piece of jewelry starts out as sheet metal and wire, Londono said. Everything is cut, stamped and soldered completely from scratch and by hand. The creation process involves hammers, metal clippers, pliers, a butane torch and a miniature hacksaw.

For all her supplies, Londono sources from a jeweler supply store local to her shop. As for her crystals, her first batch came from a trip to Colombia last spring.

“I wouldn’t survive without (the supply store) when it comes to my metal and tools,” Londono said. “The crystals of South America were absolutely stunning. Everything else comes from local markets, other Etsy shops, herb and crystal shops and even gifts from friends.”

To make her signature penny bracelets, Londono punches two holes on opposite sides of the coin, stamps each letter of “luck” individually and threads the string through the holes, tying an easily adjustable knot.’

A new addition to Cheap Luck Co., resin crystals with small plants inside, are a simpler piece to make.

“I make my own silicone molds out of crystals that I own,” Londono said. “Then, I just mix the resin and hardener, pour it into the mold, add whatever plant I’m casting and wait for it to dry. Then, they are attached to their metal part just like any other crystal.”

Aside from jewelry making, Londono’s freelance photography work has been featured in Underground Sparks Magazine, Alternative Press Magazine and Noise Revolution Magazine — to name a few.

“When I was in middle school, my dad gave me his Canon t50, a film SLR from the 80s,” Londono said. “Shooting with film sparked this curiosity in me to learn how to work this machine in a way that makes things look the way I wanted.”

Londono pursued photography through high school and receive her BFA in photography in 2015.

Metalsmithing, as Londono referred to it, has become her main project, but she still shoots concerts for a publication and does freelance portraits when she has the opportunity.

The success of Cheap Luck Co. has become more than Londono could have thought, giving her the opportunity to showcase her work at Perspective Miami, an art show that a few of her college friends put together.

“I honestly started doing this because I had discovered so many incredible jewelers online but could never afford their pieces because they’re made of silver,” Londono said.

Now, she creates copper jewelry as a cheap alternative for people who want to wear custom jewelry but may not have a ton of money, like most  college kids and fresh graduates.

After some of Londono’s proudest moments for Cheap Luck Co., she hopes that she will be able to continue selling her jewelry in the future.

“I was lucky enough to be able to showcase and sell my work alongside so many talented artists (at Perspectiv Miami),” Londono said, “and be a part of something that will hopefully continue to grow with more shows planned in the future.”