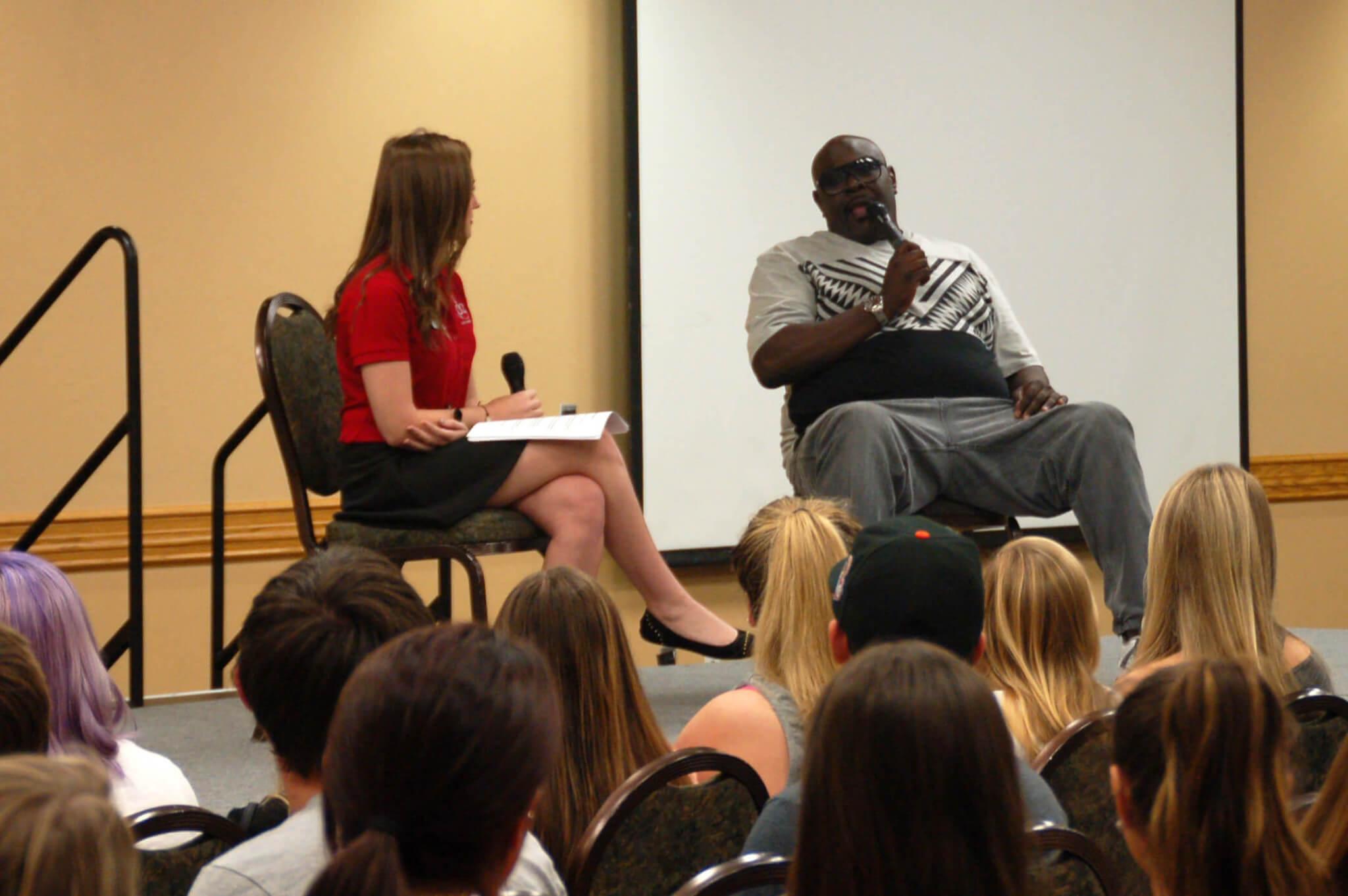 Stories of international hijinks, fond memories and plans for the future were discussed in the Cohen Center Ballroom when Programming Board welcomed MTV star Big Black on Monday night for its Big Black Lecture.

Christopher Boykin, better known as “Big Black,” was skateboarder Rob Dyrdek’s partner in crime on the popular MTV series “Rob & Big.” Attempts at Guinness World Records, pranks and constant jokes were the basis of the reality show that spanned three seasons, from 2006 to 2008.

Molly O’Donnell, the director of lectures for PB, sat down with Boykin on a stage toward the front of the ballroom and asked questions regarding his time on the show. During the lecture, the star discussed how he got the moniker “Big Black” and gave audience members an inside look on how the show began.

The program was supposed to be called “Rob & Big Black.” However, at the time, the president of MTV was a black woman. After watching three-minute clips of the two, she loved what she saw but thought the title would cause some controversy.

“She said, ‘I got a problem with “Rob & Big Black,” the name. I don’t think everybody is going to be able to understand that considering the climate that we’re in now,’” Boykin said. “Rob laughed. Instantly, I got offended.”

After telling her that he would call up famous black celebrities like Jesse Jackson and Al Sharpton to see if they were offended by the title, the show was almost put on the chopping block.

“We almost didn’t get the show because I got into it with the president of MTV,” Boykin said. “She ended up winning, changing it.”

Boykin spent most of the time discussing his experiences with Dyrdek on their show and sharing stories that made the crowd erupt with laughter, from the two running from cops in Rome to Boykin getting tricked into dressing in drag.

However, pranks weren’t the only thing talked about. Boykin talked about growing up in rural Mississippi, focusing on his experiences with racism in the Deep South. The star revealed that he once didn’t get a job because the employer was convinced that he was a criminal, even though he has never been arrested.

Despite this event being the first time Boykin has visited campus, the reality star has been familiar with FGCU since Dunk City was born in 2013.

“I have not seen the full campus, but I hear it’s pretty nice here,” Boykin said. “Back when y’all were ballin,’ I went to a couple of games. They played in Texas, so I went to every game they were in. It looked pretty good.”

PB worked with Reel Entertainment, a company based in California that works with celebrities to develop its brand, to bring Boykin to FGCU.

“I went through a company who actually coordinates everything, so it was really easy,” O’Donnell said. “Everything was all-inclusive, so we just agreed on a set price. And, there’s a whole process of getting contracts and things like that. Aside from that, it was pretty easy.”

However, Boykin isn’t the only TV personality coming to FGCU. Actress Alysia Reiner, who played warden Natalie Figueroa on Netflix’s “Orange Is the New Black,” will be coming to campus on Thursday, April 21 to discuss sustainability. The event will be called “Green Is the new Black.”