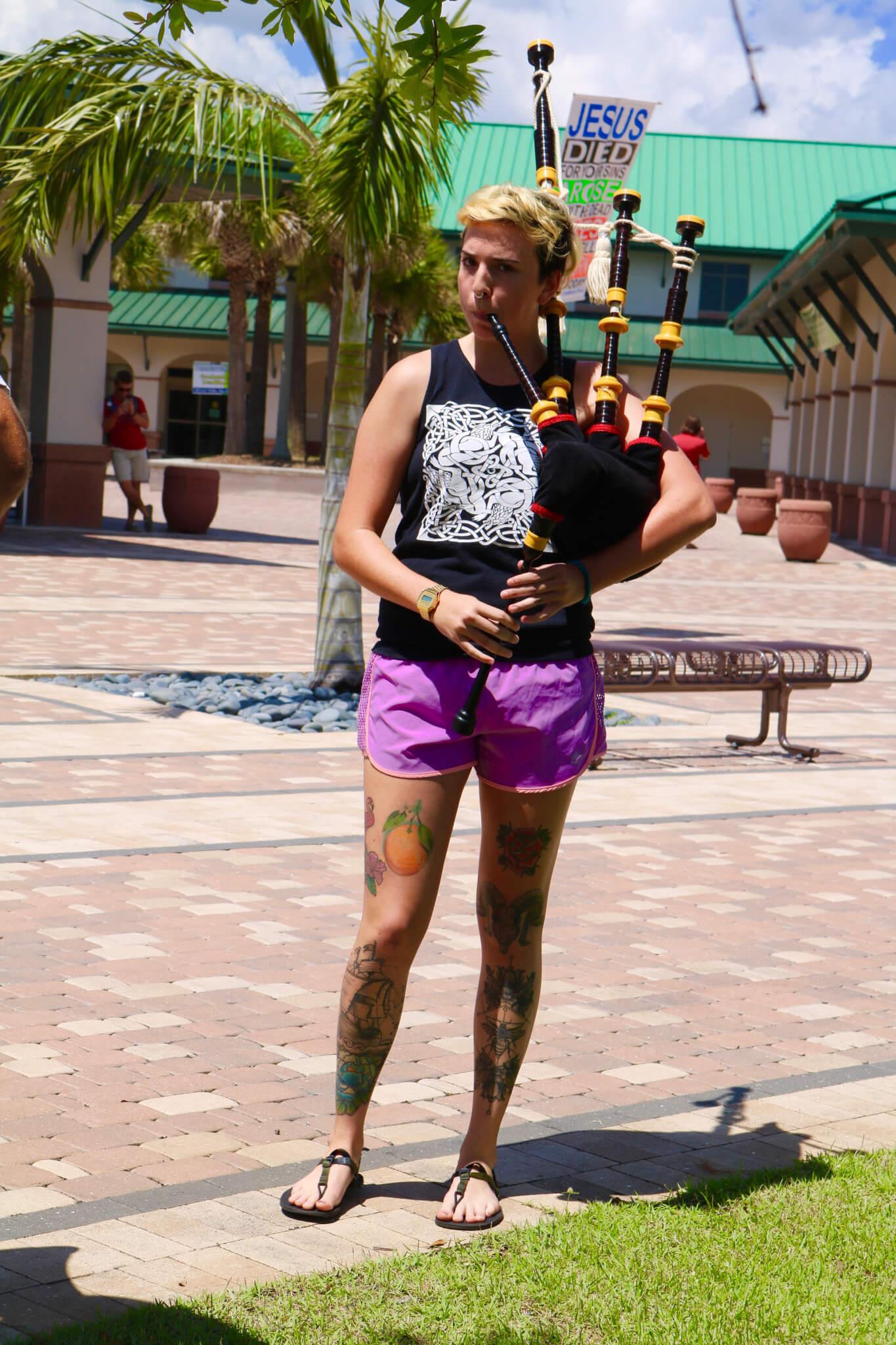 On Friday, August 19, around 1 P.M., Brice Ehmig, an FGCU senior majoring in political science and minoring in environmental education, received a text message from her girlfriend, Gabrielle “Gabby” Cicolani, a junior communications major, saying that “The Preacher” was on campus.

If you’ve been on campus since the first day of school, chances are, you’ve seen him. He is usually somewhere between the Cohen Center bus stop and the Library lawn.

Ehmig had recently seen a video from Scotland of someone playing bagpipes as a peaceful protest and immediately saw an opportunity. Ehmig has been playing the bagpipes since she was 11. She said, “I have this talent and I wanted to use it.”

She went out onto the Library lawn armed with her bagpipes. She had Cicolani hold her belongings just in case she was asked to leave. But that didn’t happen. Instead, Cicolani was able to record a two-minute and thirty-six-second video of Ehmig playing the bagpipes next to the preacher while he continued to talk into his megaphone. In a little over 48 hours, the video has been viewed just shy of 25,000 times.

“It was very cool,” Cicolani said of the crowd that formed behind her while she recorded Ehmig, “I was so proud of her. It takes a lot of courage to not only own who you are, but to fight for it.”

The preacher has directed hate-speech towards Ehmig as she’s walked on campus holding hands with her girlfriend and she has heard him say negative things to girls wearing short shorts or people who are overweight.

“He’s not exercising freedom of speech; he’s abusing it,” Ehmig said. “I don’t think he should get kicked off campus – he has the right to be there just as much as I do, but he says not nice things, and that’s not okay. And I don’t think the bullhorn is necessary. It really just causes interruption.”

Ehmig went on to say that she has had conversations with him previously in the last three years, but they never seem to lead anywhere. This was another way for her to peacefully protest.

“The Preacher” has the right to be on campus because FGCU is owned by the state, which means that the preaching is happening in a public area and he is not breaking any school policies.

According to Cornell University Law School, “fighting words” are not protected under the first amendment. These words are defined as those “which would likely make the person [to] whom they are addressed commit an act of violence.”

So while it’s true that no laws are being broken, Ehmig thinks it’s important to take note of people’s feelings about him and how his speech is actually hostile and unprotected under the first amendment. That way, maybe one day, the University can use the documentation to put together something like a recommendations committee or mock lawsuit.

The video has garnered plenty of attention on Facebook, not only in view count, but in shares as well. It has already amassed almost 300. One personwho shared the video was Ehmig’s eighth-grade social studies teacher, Teresa Bergstrom, who wrote, “Watching a former student stand up against hate-mongering makes me so proud to be a social studies teacher. Get it, Brice Ehmig!”