In 1991, when Collier, Lee and Charlotte Counties were bidding over where FGCU would be located, the Lee County Board of Commissioners agreed to donate 320 acres of land from either Six Mile Cypress Slough or the Flint Pen Strand as an environmental laboratory.

Twenty-six years later and the county is working toward fulfilling the obligation by offering 160 acres from Flint Pen Strand.

During the Tuesday, April 11 Board of Trustees meeting, members discussed the county’s long-standing offer. 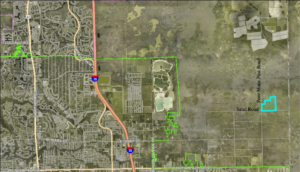 (Screenshot courtesy of FGCU Board of Trustees)

According to the meeting agenda, the property, which consists of four separate parcels, is located in South Lee County east of I-75 and is accessible only by dirt roads from Bonita Beach Road.

Magiera also completed an environmental study of the land and found that it came with no concerns.

According to the agenda, the property is considered part of the Corkscrew Regional Ecosystem Watershed lands. CREW is a non-profit organization  that deemed the property part of “prime natural lands” and wants to preserve the land by buying it or by having it owned by a government agency.

The board voted to approve moving forward with the donation.

Magiera and General Counsel Vee Leonard will now work with Lee County’s attorney to bring the agreement to the June, 13 BOT meeting.