FGCU students weigh in on second day of SG elections 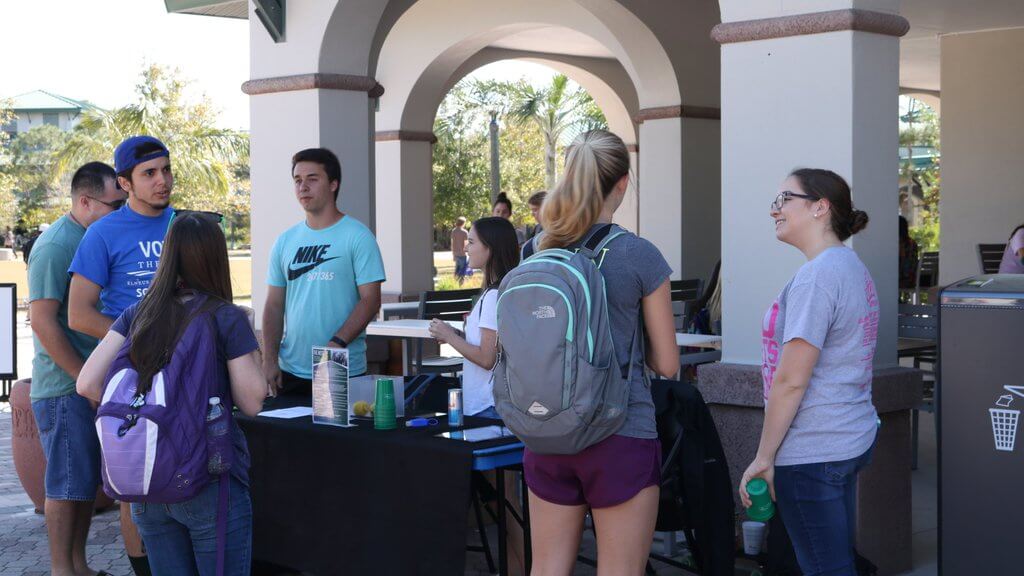 The Nest interacts with students during tabling in front of Howard Hall on March 2. (EN Photo / Javier Moncada)

This content was written, gathered and submitted by Lyn Millner’s Writing for Mass Audience and Journalistic Writing courses.

Brittani Anderson, a junior studying child and youth studies here at FGCU said she plans to vote for her friend Thieldens Elenus during today’s election.

Anderson, 21, said one of the reasons she was inspired to vote is because she is a big promoter for the black community here at FGCU, and she feels they’re not as involved as they should be.

“I feel like if I can take a stand and, you know, vote and get involved then maybe others will follow.”

Carolina Rodriguez, a psychology major at Florida Gulf Coast University, said mental illness and LGBT have always been a part of her personal and social life.

Rodriguez, 20, said it has always been unsettling to her to know that her family members cannot feel comfortable in their day-to-day lives because of social stigmas.

“I think Elneus has to find a way to reduce the social stigma that comes with LGBT and disability on campus in order to make this a more comfortable environment for all of us.”

Rachel Margalus, a junior who studies marine science, said she wants the next leader of student government to communicate with the student body and socialize more throughout the semester.

Margalus, 21, also said she hopes the new president can alleviate parking problems, comparing finding a spot to fighting through a crowd at a concert. The commuter said she hopes in the future not to have to arrive an hour before class to look for a parking spot.

“I like having my freedom of coming and going but the parking really is an issue,” Margalus said.

Camila Villaveces, a third-year business major at FGCU, is running with FGCUnited for LCOB Senator in the 2016 elections.

Villaveces, 20, says she feels this team will be diligent workers who present doable and thought-out ideas with the budget. FGCUnited has already begun plans and created ideas on how to use the budget that the school offers, she says.

“I chose to go with The United because all their ideas and dedication really inspired me to be a voice and make a change.”

Thieldens Elneus, the current SGA president, stood in the breezeway today encouraging students to vote in the SGA elections. Elneus is seeking a second term. He is a fourth-year student and computer information systems major.

Elneus, 21, said he became interested in running for president after being in other roles for SGA, which he has served for four years.

“I love to advocate for students on campus and at a state level.”